California, USA — PG&E already has enough renewable energy contracts in its portfolio that its customers now get a quarter of their electricity from sources like solar and wind. (Large hydro is not included.)

Now California regulators allow PG&E to enable customers to go 100 percent solar. The passage of SB43 gave all state residents the option to potentially buy power from a nearby community solar garden, creating a new avenue for every Californian could go solar regardless of home ownership, credit rating or roof suitability.

The other big utilities in California have not yet offered this program, but PG&E has now received regulatory approval to offer its customers this option for a few cents more per kilowatt hour added to their utility bill. 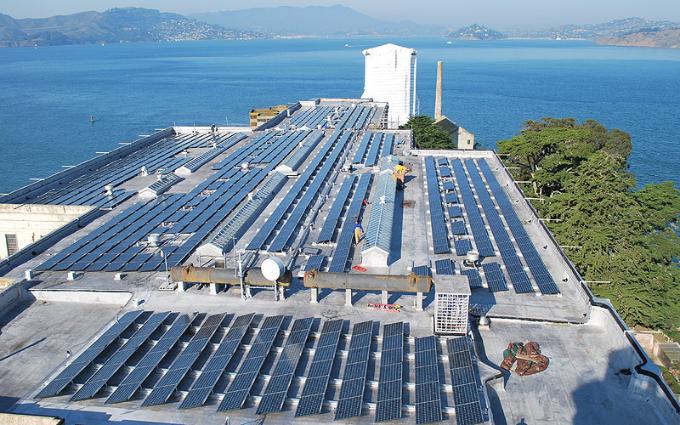 The smallest of these community solar gardens would be somewhat larger than this 307 kW array on Alcatraz Island in the San Francisco Bay. Credit: NREL

By the end of 2015, these customers could opt to get up to 100 percent of their electricity from local solar projects in two ways.

People could sign up directly with a solar developer and receive a bill credit from each utility.

“Under this option, customers will be able to contract directly with a third-party developer for a share of the output of a local solar project,”  explained PG&E spokesman, Jonathan Marshall. Aspects of this option are still being worked out by state regulators.

The second way would be to simply sign up through PG&E, and the utility would then contract with solar developers to build projects in nearby infill spaces.

While more solar-savvy customers might be comfortable contracting directly with the solar developer, the utility option may be the easier choice for the average ratepayer, since they’d simply check a box on their PG&E bill to get 50 percent or 100 percent of their electricity from the solar garden.

Unlike its regular utility-scale solar contracts, solar in this 272-MW program wouldn’t count towards the utility’s 33 percent by 2020 renewable portfolio standard (RPS) requirements, which it has contracted for through 2020.

Either way, solar developers would then build the neighbourhood solar project on nearby open space, industrial building or disturbed lands. Billing would stay with PG&E, making the transition seamless, not involving any particular credit score for a loan to buy solar.

Currently, leasing or contracting and array for its power production requires a credit score of 650 or more, almost the same needed to borrow from a bank.

“It’s a way to enable a lot of customers to participate in solar energy without having to each individually invest in a small relatively costly project,” said PG&E program manager Molly Hoyt. “They can in essence be aggregated through the utility and we will go out and get more a more cost-effective sized project and with the power of our procurement resources, which are top notch, so we get the best deal for our customers.”

Unlike the green power programs offered by over eight hundred utilities where ratepayers paid some extra for renewable energy credits or landfill-gas recapturing projects they never see, the community solar gardens will be a visible presence locally.

“It is actually quite innovative in that we are buying real steel-in-the ground renewable energy, so it is a very different program from most of the utility green power programs out there,” said Hoyt.

Unlike a home solar contract, customers can opt out at any time, a boon for the commitment-phobic. For those who use few kilowatt hours, and there are many of them in California, the program opens new solar options.

Low tier users are often the very people that can’t go solar themselves. These customers are also often renters in tiny city apartments, or occupy small tree-shaded houses, doubly locking them out of solar savings of the rooftop market. Their PG&E bills are so low that rooftop solar isn’t often cheaper, but they could now go solar — albeit by paying a bit extra.

Interestingly, both Hoyt and Marshall are representative of these customers.

“I use a little over 300 kWh a month,” says Marshall. “I am on the lower end of the consumption spectrum; but there are lots of people in coastal California who don’t have big air-conditioners and so on. There you’re talking $6 to $9 a month.”

The size range hits the Goldilocks sweet spot for economy. Community solar gardens, limited to over half a megawatt but under 20 MW, takes much less permitting than utility-scale and is much more efficient to build than a typical 5 kW rooftop solar array.

“Candidly; rooftop solar is a complicated asset. It’s a complicated financing and it’s a complicated design. It’s not like a car where you have one ford 150 truck,” as one former solar developer puts it. “Everybody who’s getting a solar system is getting something slightly different for each house.”

While the smallest might fit on a very large industrial rooftop, most will be ground mounted.

“This kind of mid-sized project size does capture a lot of economies of scale,” says Marshall. “It may not be quite as cheap as some of the bigger projects, but I believe it is quite a bit more cost effective than just a small rooftop solar array which is perhaps 5 kW.”

For any utility, being able to aggregate solar consumers on neighborhood projects sited near substations or distribution feeders reduces interconnection issues. PG&E is no different.

“We think we are a little bit in the sweet spot,” says Hoyt. “You’re typically able to use the existing distribution network that already exists while still getting economies of scale compared to a small rooftop system.”

“You could put these on disturbed land that has already been put to use for farming or an old industrial park or something like that so you are not getting into the controversy about untouched desert preserves,” said Marshall. “And they will tend to be closer to our distribution lines and thus require less big investment in heavy duty transmission, which also slows things down a lot.”

Both regulators and PG&E were committed to ensuring that this cost non-participating customers nothing. To that end, the program has been designed “very carefully,” explained Hoyt. “There is a lot of scrutiny by our regulators to that effect.”

“We will be segregating and allocating costs very carefully internally so they are allocated only to the program. Nonparticipating customers will not bear any of the costs, and we believe that is a very important principle to adhere to.”

Many industry insiders expect solar to be cheaper than natural gas soon. What happens if even smaller utility-scale solar like this costs less than other options in a few years? Would participants benefit?

“[It’s] actually is a very real possibility,” Hoyt conceded. “So participants in the program in that case will actually be receiving a net credit.”