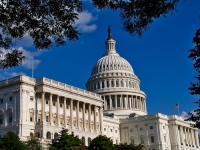 This week two bills promoting geothermal energy development in the U.S. were reintroduced in the Senate. Both bills were approved by the Energy Committee in the last Congress but never saw action on the Senate floor.

Senate Energy and Natural Resources Chairman Ron Wyden (D-Ore.) reintroduced a bill to authorize noncompetitive leasing for geothermal developers on lands adjacent to a proven geothermal resource. S. 363, the “Geothermal Production Expansion Act, could allow a geothermal project to expand onto adjacent land if necessary and would add to a project’s royalties and rents.

Wyden said in a statement, “The reason for this legislation is to allow the rapid expansion of already identified geothermal resources without the additional delays of competitive leasing and without opening up those adjacent properties to speculative bidders who have no interest in actually developing the resource, only in extracting as much money as they can from the existing geothermal developer.” Wyden added, “The bill is not a giveaway at taxpayer expense. The bill limits the amount of adjacent Federal land that can be leased to 640 acres.”

Sen. John Tester (D-Mont.) reintroduced a bill to establish a geothermal loan program. S. 362, the “Geothermal Exploration and Technology Act,” is similar to the bill last Congress to “promote the mapping and development of United States geothermal resources by establishing a direct loan program for high risk geothermal exploration wells, to amend the Energy Independence and Security Act of 2007 to improve geothermal energy technology and demonstrate the use of geothermal energy in large scale thermal applications, and for other purposes.”

This article was originally published in GEA’s Geothermal Energy Weekly and was republished with permission.