It is a business truism: Winners see opportunity in adversity. An enormous economic opportunity in New Energy emerged across this country in the last two years, even as the economy itself withered and contracted. It was a green dream of a New Energy economy spawning freedom from fossil fuel spew and radioactive waste and generating a cleaner, healthier and more human-sized lifestyle.

With the slow economic recovery, however, some are beginning to think the opportunity will slip away if they do not get aggressive about turning the dream into real businessess, manufactories and installations generating real revenues, jobs and energy.

Nobody has envisioned New Energy’s potential more vividly than a small group of ambitious folks in the often-overlooked San Luis Obispo, Santa Barbara and Ventura tri-county region of California’s central coast just north of the Los Angeles area. Community leaders there, having had a taste of regional development in the IT boom of the late 1990s, now intend to turn the dream into real energy deals and real sustainable growth and to turn the tri-county region into a “Green Coast” booming with New Energy opportunity. ::continue:: 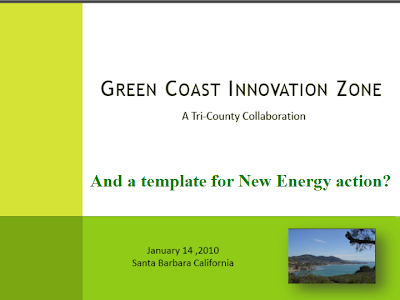 They have embarked on a pioneering effort to define exactly how a region can join together to create a New Energy boom. In doing so, they may be creating a template for regional New Energy economy coalitions throughout the nation.

The instigator was Henry Dubroff, Editor of the Pacific Coast Business Times. As he traveled the beat in 2008-09, he talked up the idea of a Green Coast to Bill Buratto, President of the Ventura County Economic Development Association, Dave Davis, Director of the Santa Barbara Community Environmental Council, and Mike Manchak, President of the Economic Vitality Corporation. The concept of the Green Coast Innovation Zone (GCIZ) came out of those conversations. 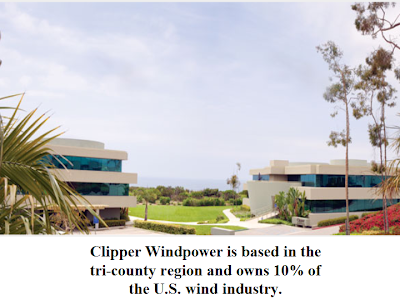 In a June 2009 meeting of about 30 tri-county leaders, the decision was made to draft a formal white paper and to go forward. Green Coast Innovation Zone: A Tri-County Collaboration, the original definition of what they envisioned, was published in late summer/early fall of 2009.

A few weeks later, at a clean energy day gathering in the Washington, D.C., offices of Representative Lois Capps (D-CA), a similar group of tri-county leaders won the backing of their member in the U.S. House of Representatives. That was when they set the January 14 organizational meeting and earnestly began inventing their way toward a local New Energy economy and a New Energy future… 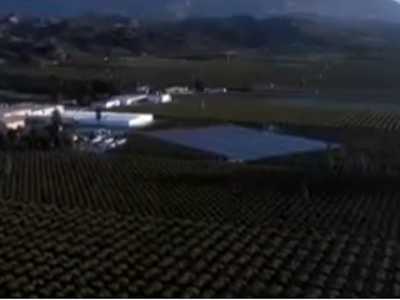 But could these visionary thinkers get buy-in? The only way to find out was to call a meeting and see who showed up.

On January 14, in a quaint, picturesque, ocean side meeting room in Santa Barbara, Bill Buratto got up in front of a room filled to the exits and welcomed representatives of the state and local governments (including a coterie of people representing Congresswoman Capps), representatives of the state and local educational systems (from UC Santa Barbara and Santa Barbara City College to the local grade schools), some of the most important solar and wind industry developers in the world (including SunPower, First Solar, REC Solar and Clipper Windpower), people from big utilities (like Southern California Gas Company) and people with money (like Morgan Stanley, Agility Capital, EnTech Capital and Maverick Angels).

Buratto enthusiastically explained the plan, told them it needs a quarter of a million dollars to get going, broke them up into 6 working groups (Innovation/Entrepreneurship, Workforce Development/Education, Public Policy, Sustainable Ag, Utility Class Renewable Energy, Transportation) and essentially told THEM to tell HIM how to get the money and make the action plan happen. 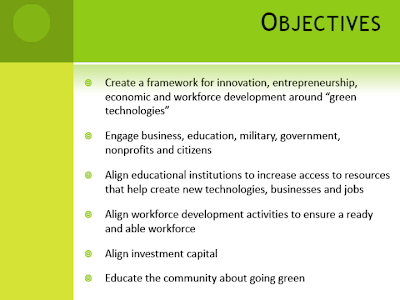 The working groups’ response was exciting…

The first brilliant thing about the way the GCIZ has so far been developed is that in its first formal meeting it swept up some of the most dynamic talents in the region and put them to work building opportunity – for themselves!

Beyond that, it is brilliant because it engages the tri-county region in a bottom-up response to California’s greater economic difficulties, a response localities in states across the country now would probably be well-advised to prepare. 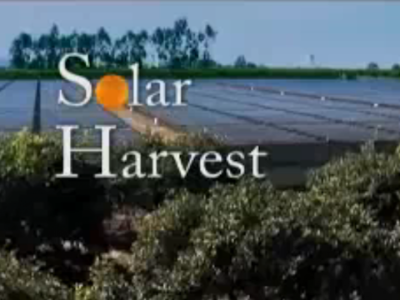 Will this plan lead to a New Energy harvest for these 3 ambitious counties?

Finally, the GCIZ offers these California counties a pathway to profit while coming into compliance with the exciting climate change legislation California Governor Schwarzenegger and the state’s forward-thinking leaders have introduced.

Enthusiasm is spreading. It may only be a matter of time before the Green Coast is as familiar a euphemism for the Energy Technology boom as Silicon Valley was for the Information Technology boom.

Better yet, Silicon Valley spawned a plethora of successors, from North Carolina’s Technology Triangle to Bangalore, India’s High Tech Hub. Will the Green Coast Innovation Zone be the template for a world of transformational Energy Technology initiatives? Stay tuned.

This post is based on Turning the Green Dream into Real Deals; Introducing the Green Coast Innovation Zone, Herman K. Trabish, January 17, 2010, NewEnergyNews.