More
Home Baseload Hydropower Turbine Control: Method to Develop a Family of Cam Curves from a...

A method is available that allows hydro project owners to extrapolate a single head index test cam curve into a family of cam curves for a Kaplan turbine. This method provides accurate results while reducing the need for additional index tests.

One of the basic purposes for performing index testing on a Kaplan turbine is to derive the cam curve, or blade angle to wicket gate relation, to program into the governor for turbine control. However, cam profiles change as head changes. This means either index tests need to be performed at various heads or the cam profile from an index test of a single head needs to be extrapolated to other heads. The commonly used methods for extrapolating this data involve a shift or translation along the wicket gate or horizontal axis based on comparison with model test data. However, the results are known to have a significant degree of uncertainty, often resulting in a loss of efficiency of a couple of percent.

The Tennessee Valley Authority developed a graphical extrapolation method using a homologous model hill curve. This method involves extrapolating the single head index test cam curve by both translation and rotation, while also retaining the shape relationships of the model hill curve. This results in a more accurate family of cam curves and reduces the need for additional index tests, saving time and money.

Deciding to develop the method

An index test is a relative efficiency test that serves two purposes. First, the relative efficiency profile of the turbine-generator can be derived. A relative curve provides information on the power at real best efficiency and the decrease in real efficiency at other power levels. In other words, it reveals how to run the unit for optimum generation, longest service life and minimum mortality to downstream migrating fish. Second, for Kaplan turbines it can provide the cam curve to program into the governor for unit control. Because an index test is performed on a constant head basis, both the resulting relative efficiency profile and cam curve are valid only for the constant head used for the test.

As the head changes, the profile of the cam curve also changes. This is due to the fact that changes in head or wicket gate opening result in a change in the velocity vector of the fluid entering the wheel case. The blade angle needs to change to match the angle of the entering fluid. Specifically, as the head increases or the wicket gates open, the blade angle should go steeper to maintain optimum efficiency.

This variation with head usually necessitates performing several index tests over the head range of the unit to obtain the most accurate cam curves. Due to the expense associated with index testing ($10,000 to $50,000), project owners often opt to extrapolate a cam curve derived from a single index test into a family of cam curves covering the full head range. This extrapolation generally is done by comparison with the cam curves derived from a prior homologous model test. Specifically, the whole family of model cam curves is shifted horizontally along the wicket gate axis until the model cam curve corresponding to the head of the index test most closely matches the cam curve from the index test.

Beginning in 1992, TVA undertook a Hydro Modernization program. The goal of the program, to be completed in 2018, is to increase capacity and efficiency at most of TVA’s 31 hydro plants, which have a total capacity of more than 5,400 MW. As of July 2011, this program had increased capacity by 564 MW and efficiency by 5 percent.

As part of this program, TVA personnel performed index tests on all Kaplan turbines before and after their individual runner replacements. To provide the most accurate family of cam curves at the lowest cost, TVA developed a graphical cam curve extrapolation procedure. 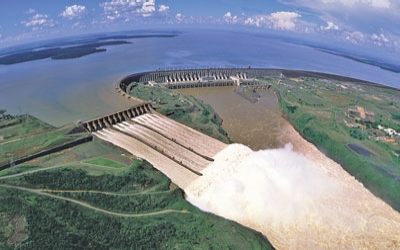 Basics of the method

First, the index test data is reduced in the conventional manner, wherein the relative efficiency profiles of a series of fixed blade angles are plotted and a tangent curve is drawn connecting the peaks. The corresponding wicket gate opening for each point of tangency to a fixed blade angle is then determined by interpolation. Head used is the constant gross head as measured by the powerhouse instrumentation. Figure 1 shows relative efficiency profiles and a tangent curve from a U.S. Army Corps of Engineers unit.

This new method of cam curve extrapolation involves cross plotting the model hill curves so that their shape relationships may be retained in the extrapolation. In addition, differences in losses are graphically accounted for while the actual points of tangency from the index test remain unaltered.

The below example of this method uses the results of an index test performed on Unit 5 at TVA’s 160-MW Pickwick plant. This unit is rated at 48,000 hp at 43 feet of net head and has a synchronous speed of 81.8 rpm. Figure 2 shows the cam curve derived at a gross head of 49 feet. 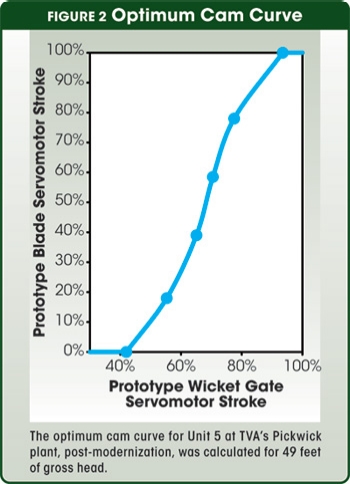 Figure 3 is the first graph to be prepared in using this method. This data comes from the homologous model hill curve. One of the net heads plotted is equal to the gross head of the index test. The other net heads selected are arbitrary but span the head range of the cam curves to be extrapolated.

Development of the next four figures is shown as a sequential series of graph overlays depicting the individual stages of development. For Figure 4A, the curves of Figure 3 are directly cross plotted with their data points: model gate opening, model blade angle and prototype net head. Therefore, no scale conversions are required. More heads could have been plotted on Figure 3 to give more data points for the cross plot. However, three points are usually sufficient to define each different shape of the curves. 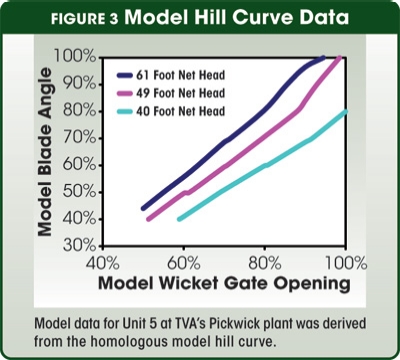 For the second stage, shown in Figure 4B, the data from the optimum cam curve (Figure 2) derived from a tangent curve are plotted. However, to do so, up to three conversions may be necessary. First, index tests on Kaplan turbines usually are performed on a gross head basis. Also, the instrumentation to measure and input head data into the governor, to be used with the cam data, usually is on a gross head basis. Therefore, the net heads for the individual points of tangency used to make up the cam curve must be determined. In fact, this is an opportunity to account for all the differences in head determination that may exist between the model and prototype.

In this example, the velocity head of the fluid exiting the draft tube in the model was not charged as a loss to the turbine as it is in the prototype. Therefore, its individual values were determined from the model flow values, stepped up to prototype flow values.

Then, the computed velocity heads were subtracted from the prototype constant gross head of 49 feet to determine the individual prototype net heads, in order to plot the cam curve or points of tangency in Figure 4B. As a starting point, at low flows, the net and gross heads are essentially equal. Then, of course, this line bends to the left because the net heads become progressively less than the constant gross head as the flow rate increases, with increasing blade angle. 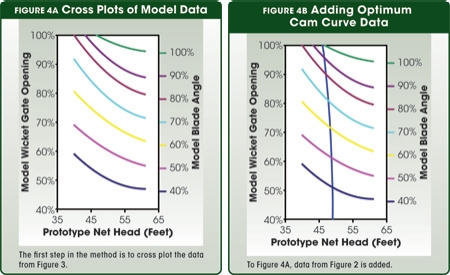 The third step is to convert the prototype blade servomotor stroke in percent to the model blade angle in percent. In this example, these two were considered to have the same numerical values of percent, so no conversion was required.

Next, vertical lines equal to the other gross heads, to which the cam curve is to be extrapolated, are constructed (see Figure 4C). These may be selected arbitrarily, but here they were chosen to have a 6 foot separation for the family of cam curves. Starting where the net and gross heads are about equal, these lines are drawn parallel and with the same bent shape as the 49 foot gross head line. There is a subtle aid to accurately constructing these other lines. In Kaplan turbines at the steeper blade angles, the vent area between the blades tends to control, or throttle, the flow. That is, the blade opening acts like an orifice and the flow rate tends to be a function of the square root of the head. Thus, for example, along the line for the model blade angle of 90% from the 49 foot to the 55 foot gross head, the difference between net and gross heads is 5.9% greater [100(55/49)1/2] for the 55 foot than for the 49 foot gross head.

The final procedure to complete this graph originally involved use of a French curve. Turbine engineers have for years used a Ship’s Curve #48 in graphically portraying turbine performance profiles. The same thing may be done today with the graphical capabilities of electronic spreadsheets. However, it is easier to describe assuming use of a French curve.

Noting that, for instance, the 40% model blade angle is closest to the single 0% prototype blade servo stroke cam curve point, the French curve is positioned to match the corresponding three diamond-shaped points. Then, the French curve is slid downward until it is aligned with the single index test cam curve data point, and a line with the same curved shape is drawn through this point. Where this line intersects the other gross head lines are their extrapolated cam curve points for a 0% prototype blade servo stroke. This same procedure is repeated for all other prototype 49 foot gross head cam curve points, as shown in Figure 4D. 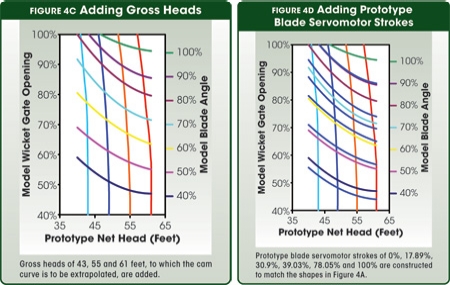 The electronic spreadsheet is basically to determine a polynomial trendline for each model blade angle. Next, the difference at the known points on the index test head line is determined between the closest model and prototype blade angles. Then this difference is applied to adjust the individual trendlines up or down accordingly.

Lastly, these extrapolated cam curve points, along with the cam curve points from the 49 foot head index test, are plotted in Figure 5. The only scale conversion needed is to convert the model gate opening in percent back to the prototype blade servo stroke in percent. 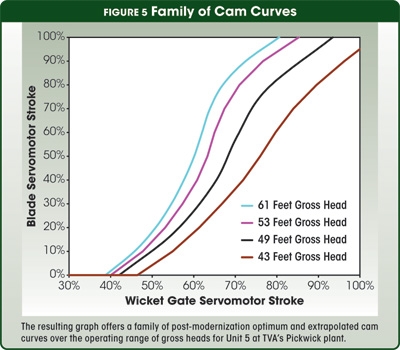 TVA has developed a method to graphically extrapolate a single gross head Kaplan cam curve into a family of different head cam curves. This method uses both translation and rotation while retaining the shape relationships of the model hill curve. It also accounts for differences in head measurement between a model and prototype, resulting in a more accurate family of cam curves and reducing the need for additional index tests.

Lee Sheldon, P.E., a consulting engineer, worked on the Tennessee Valley Authority’s Hydro Modernization Program for a year, analyzing index test data and writing index test reports. The method discussed in this article was developed by TVA engineers who are now retired.