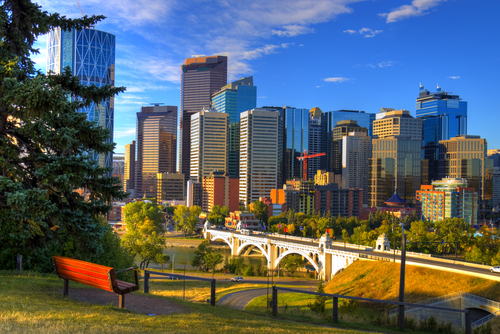 The race to find winners from Alberta’s low-carbon policies is on with analysts betting renewable energy developers such as Enbridge Inc. and TransCanada Corp. will be among the best placed to make the shift.

Companies poised to gain will be those able to finance new wind and solar power projects, as the government boosts the province’s share of renewable electricity to 30 percent from 9 percent by 2030. TransAlta, meanwhile, surged 9.5 percent Monday as investors bracing for the worst were buoyed by Alberta’s pledge to compensate coal-power generators for phasing out their plants by 2030.

“These renewable power contracts are going to go to the bidder that needs the least amount of government support, developers with most financial flexibility and overall lowest cost of capital” such as Enbridge and TransCanada, Patrick Kenny, a Calgary-based analyst at National Bank Financial, said in a phone interview.

Alberta Premier Rachel Notley on Sunday unveiled sweeping changes to the province’s climate policy with a faster transition from coal to more renewable and gas power; an economy-wide carbon price and a cap on oil-sands emissions. As much as C$15 billion ($11.2 billion) will have to be invested in new electricity generation, according to National Bank. Spending on power distribution and technology to lower greenhouse gases from oil and gas production is also expected.

Enbridge and TransCanada are already among Canada’s largest renewable power operators. Enbridge owns 2,065 MW of wind power across the country, enough to power 650,000 homes, while TransCanada operates wind, hydro and nuclear plants as part of its 11,800 MW of power generation.

TransCanada is “ideally situated” to play a role in the switch from coal and has invested successfully in other places that have transitioned to renewable energy including Ontario, Mark Cooper, a spokesman, said in an e-mail.

The plan will give certainty for the development of “much-needed energy infrastructure investments,” Al Monaco, chief executive officer of Enbridge, said in a statement. Graham White, a spokesman, declined to comment further.

TransAlta’s renewable division, which the company spun off in an initial public offering in 2013, along with companies such as Berkshire Hathaway Inc.’s AltaLink transmission business, are set to benefit, said Ernst & Young LLP’s Gerard McInnis.

“There are significant opportunities for investment in the grid and distribution,” said McInnis, a partner who leads the power and utilities practice in Canada. “And there will likely be new entrants to the market.”

TransAlta Renewables on Monday said it would invest C$540 million in three of its parent’s projects, including renewable energy, while Alberta Investment Management Corp. bought shares in the renewable division, whose shares were little changed.

The climate plan is a “net negative” for Alberta power generators that have stakes in six coal-fired plants being closed before the end of their lifespan, including TransAlta and Capital Power Corp., said National Bank Financial’s Kenny. Coal-plant owners will find it tough to keep their power supply competitive before the end of the phase-out period, with a carbon tax about 2.5 times higher than previous assumptions, Kenny said.

Still, Robert Kwan, an analyst at RBC Dominion Securities, raised his price target on TransAlta as coal power producers avoided the “worst-case” fastest potential phase-out of their plants with the Alberta policy, he said in a note.

TransAlta is reviewing the climate policy and how it will impact the company’s business, according to a statement Sunday. Stacey Hatcher, a spokeswoman for the company, declined further comment. The transmission system is expected to be “critical” to the success of the government’s plan, and AltaLink welcomes the greening of the electricity system, Scott Schreiner, a company spokesman, said.

Capital Power said in a statement that Alberta committed to treating coal companies fairly and that the company is well-positioned to build new gas and renewable generation. Michael Sheehan, a spokesman, said the company doesn’t plan to comment further until its Dec. 3 investor day.

Electricity isn’t the only industry that’s affected by the policy. Oil producers will face a carbon price for their operations and will be forced to reduce methane emissions. At the same time, demand for natural gas may increase.

While methane emissions from production will need to drop and processing facilities will also have to pay the carbon tax, new gas-fired power plants are poised to drive about 1.5 billion cubic feet a day of additional demand for the fuel, according to the Canadian Association of Petroleum Producers.

The policies probably won’t have a big impact, for now, on oil-sands developers such as Canadian Natural Resource Ltd., Suncor Energy Inc. and Cenovus Energy Inc., according to analysts from National Bank, RBC and TD Securities Inc. Oil and gas producers are also waiting for an update of the province’s royalty regime with recommendations expected by the end of the year.

The carbon price for existing mining projects and those that use steam to melt bitumen is set to rise to a range of 50 cents to 75 cents a barrel, versus a range of 26 cents to 65 cents a barrel under the previous structure, Menno Hulshof, an analyst at TD in Calgary, wrote in a note. The industry will have to find ways to expand volumes with the new cap on total emissions in the oil sands of 100 megatons, Hulshof said. Current oil-sands emissions are about 70 megatons.

Canadian Natural, Suncor and Cenovus expressed support for the policy, with Canadian Natural Chairman and billionaire investor Murray Edwards noting the announcement “removes barriers for collaboration with a broader group of stakeholders,” in a statement.

Companies with operations outside Alberta will be better placed to weather higher carbon prices in the province, such as Saskatchewan-focused Crescent Point Energy Corp., said Robert Mark, director of research at MacDougall, MacDougall & MacTier Inc. in Toronto.

“We’re past the point of no return on climate policy,” he said. “The new rules weren’t as draconian toward energy as some had feared.”