SAN LUIS OBISPO — Most people who drive up and down on Highway 101 through California would never think of making a one-hour detour through the oak-dotted hills, canyons and ranches to visit the Carrizo Plain, a beautiful swath of land that is ringed by mountains and, in the spring, blooms with wildflowers. Yet, soon this region will be host to what will be among the largest solar power plants in the country.

NRG Solar and MidAmerican Solar, along with SunPower and First Solar, held a tour of their construction sites last week. The 3,200-acre project, called California Valley Solar Ranch, are still in the early stages of completion – NRG and SunPower also announced that they have connected 22 MW of the 250 MW(ac) to the grid under a 25-year contract with Pacific Gas & Electric.

MidAmerican and First Solar said they have installed just over 1 million of the nearly 9 million solar panels that will make up the 550 MW(ac) project, though none have been connected to the grid yet. The companies declined to specify how many megawatts have been built, so a rough estimate is somewhere around 60 MW. At 550 MW, Topaz Solar Farms will occupy about 3,500 acres and become the largest solar power plant in the country.

The two projects, about 10 miles apart, also represent two of the largest solar power contracts for PG&E, which is under state mandate to increase its supply of renewable electricity to 33 percent by 2020.  The success of the two projects is critical for meeting that mandate and for demonstrating the potential of solar power to play a greater role in our energy mix. Today, most of the country’s electricity comes from coal and natural gas power plants. Renewable energy accounts for 13 percent but that includes hydropower plants, according to the U.S. Energy Information Administration. Solar makes up less than 1 percent.

The construction of more and larger renewable energy projects will help drive down equipment and construction costs. Solar energy proponents hope one day solar electricity will cost about the same as coal-based electricity. But developers and utilities also don’t believe there will be many more mega projects like the two in San Luis Obispo County because they often go through lengthier and contentious permitting processes and raise questions about the need for new tranmission lines. Transmission line projects also are magnets for environmental controversy. 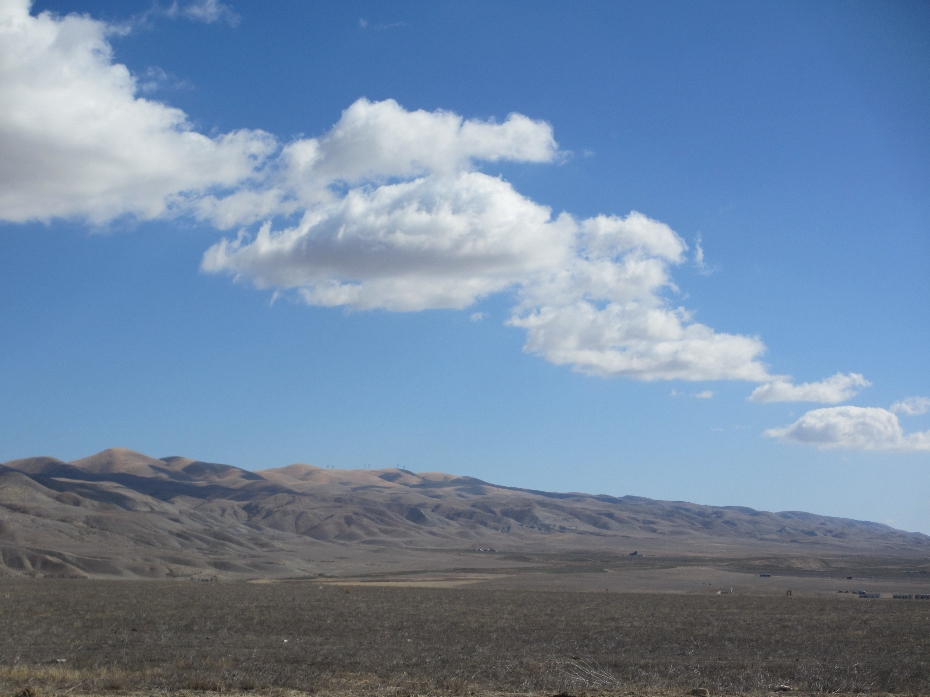 “You are witnessing an energy revolution in the making,” said Howard Wenger, president of SunPower, in a ceremony to mark the connection of the 22 MW to the grid.

A few hours later, First Solar’s vice president of project development engineering, Jim Tyler, expressed a similar exalted view during a speech before the tour of the Topaz site: “The whole world is impacted by this project.”

Project developers have come to embrace the use of photovoltaic panels – instead of other types of solar energy equipment – mainly because the costs of solar panels and other equipment that make up a solar farm have been falling quickly. The world’s market has experienced an oversupply of solar panels for roughly two years now, and that has intensify competition, depressed prices and led to a slew of bankruptcies of solar panel makers. Several of them have stated their plans to switch to using solar panels from solar thermal equipment for their projects in California.

In fact, the wholesale price for power from a photovoltaic power plant is about 25 percent lower than the wholesale proce of power from a solar thermal power plant, said Fong Wan, PG&E’s senior vice president of energy procurement, who attended the tour of both projects. But Wan stopped short of saying that the wider deployment of solar power projects will entice the utility to build its own solar power projects. Utilities usually can raise cheaper capital to build power plants if they already own power plants or have assets that would enable them to pay back loans.

PG&E, like the two other large investor-owned utilities in the state, plans to meet the 33 percent mandate largely through contracts to buy renewable energy, including solar, wind and geothermal, from power producers. PG&E has signed over 120 renewable energy contracts for roughly 10,000 MW and feels confident that it will be able to meet the state requirement. 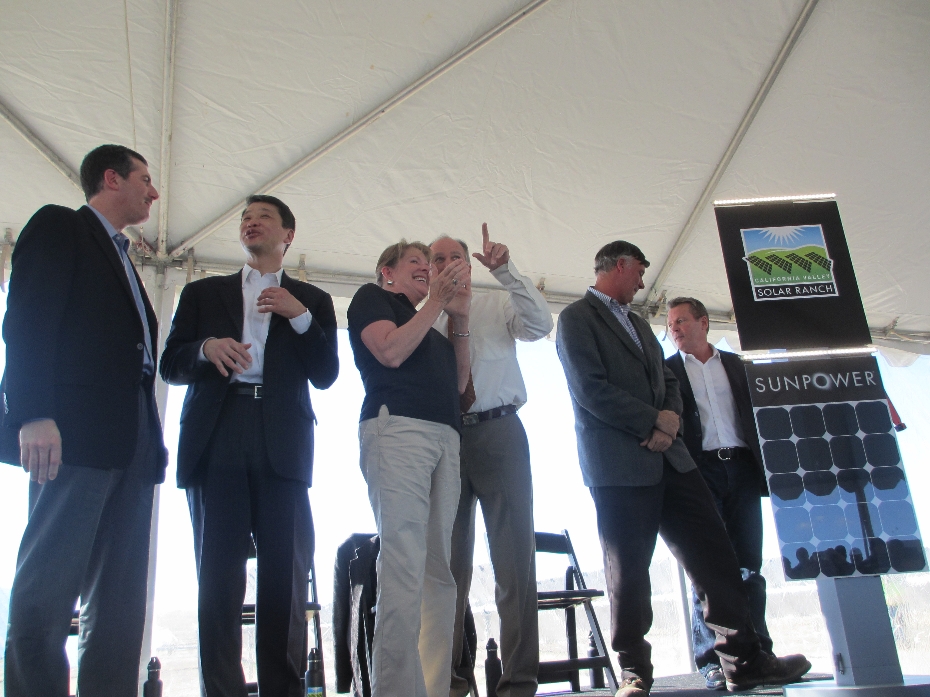 The celebration belied the difficulties First Solar and SunPower experienced before they clinched the final permits from San Luis Obispo County and erected the first solar panels late last year. Both companies were vying for federal loan guarantees to help finance the projects, and they needed to start construction before the end of September 2011. That meant they would have to secure the construction permit from the county before that.

The two companies were facing strong opposition from environmental groups, however. SunPower and First Solar ended up signing deals with environmental groups including the Sierra Club to set aside land and clear fences for protecting the kit fox and also endangered giant kangaroo rats. SunPower agreed to dedicate about 12,000 acres for wildlife corridors while First Solar will set aside roughly 18,000 acres. Ffirst Solar plans to preserve the 3,500 acres where Topaz will occupy after decommissioning the power plant.

The two companies jointly announced their agreements with the environmental groups last August, right before they received the construction permits from the county. SunPower went on secure a federal loan guarantee for $1.24 billion and sold the project to NRG Energy. First Solar didn’t secure a federal loan guarantee but did sell the project to MidAmerican.

Reviewing the two projects were daunting tasks for the county. San Luis Obispo hadn’t had to consider solar projects of this scale before, so it was a long and sometimes bruising learning process for all involved. 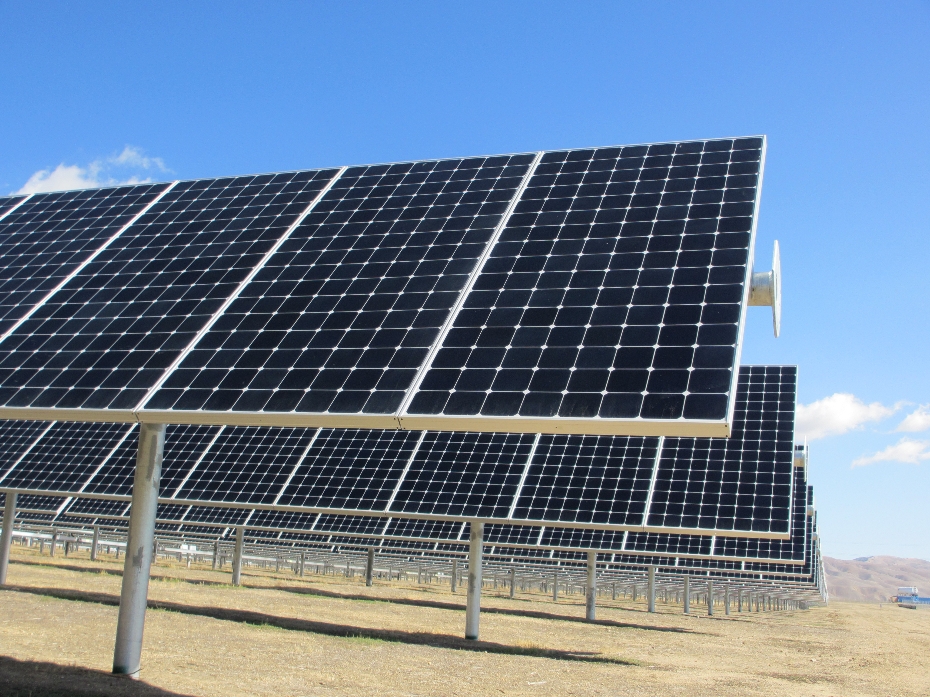 County supervisors who spoke before the tours began last week joked about the fun of poring over thick environmental impact reports. Supervisor Jim Patterson gave perhaps the most thoughtful speech and summed up the conflicting feelings that been expressed by local people about the rise of rows and rows of solar panels blanketing a big part of the plain.

Patterson recounted the Native American archaeological sites in the nearby Carrizo Plain National Monument, the need to protect the endangered San Joaquin kit fox, the local jobs that the projects have created, the employees of the project owners and builders who have moved to the region to oversee the construction, and a plan to develop a renewable energy curriculum at the local Cuesta College.

“I still have reservations” about the projects, said county Supervisor Jim Patterson. “There were many challenges to overcome. This landscape holds many sensitive resources.”

The Carrizo Plain emerges as a seemingly endless stretch of earth colored with many shades of yellow and brown. In the distance, mountains and undulating hills frame the plain, at least the part of the plain that you can see. It’s 50 miles long and up to 15 miles wide and home to ranches. It’s a remote corner of California and fits the classic definition of open, blue-sky American west. 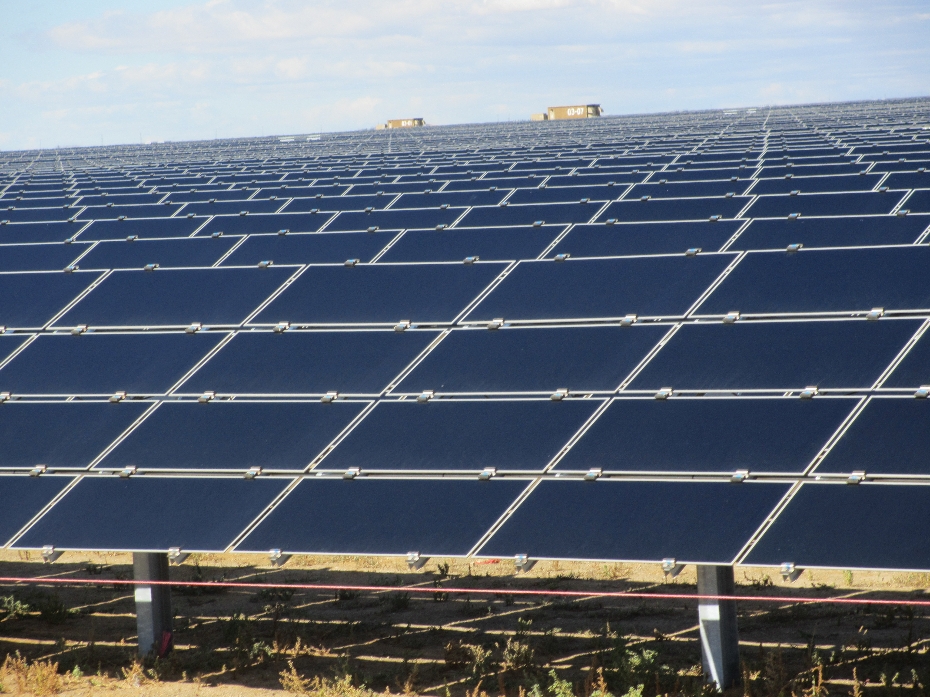 Our tour guides wanted to make sure that we witness the species protection efforts by the companies involved. At the California Valley Solar site, images of the kit fox, scanned onto a plain white paper, are posted at various locations to remind workers to look out for the creature. No “wanted” posters were seen at the Topaz Solar site. The two owners and their builders took a different fence design philosophy for helping the kit fox move around the construction sites and escape predators such as coyotes (see the photo gallery in upper right). The fence at California Valley Solar has openings that become larger near the ground, whereas the kit fox-friendly fence at Topaz Solar is a conventional chain-link fence an opening that runs across the length of each fence.

SunPower started the project earlier and is farther ahead. The company has installed 150 MW of panels, including the 22 MW that have been connected to the grid, but some of the wiring and other work hasn’t been completed yet to connect all of them to the grid. The company plans to complete the entire solar project next year. First Solar, on the other hand, plans to complete Topaz in early 2015 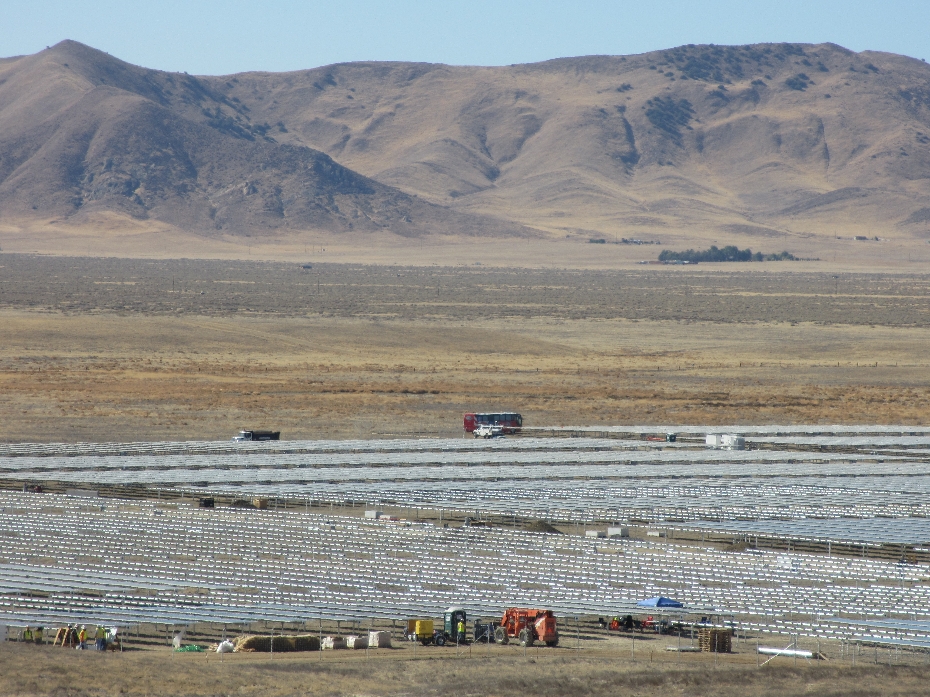