Texas, USA – The following article is an excerpt from a technology, investment, and market study titled Algae 2020, Vol 2 (2011 update) from market research firm Emerging Markets Online. The excerpt provides a summary of findings and highlights 11 key trends for the algae industry from 2011 to the year 2020.

Renewable Oils for Biofuels and Biochems

The “brewery” model in algal biofuels ventures is known for low-cost, high tech production using standard industrial fermenters. Solazyme is leading the charge in the algae-based brewery/fermentation model, followed by veteran algae producer Martek with support from BP.  We expect to see companies similar to Solazyme emerging in 2011-2012 worldwide using the microbial brewery model to produce “Renewable Oils” via fermenting sugars as seen with Amyris (green crude and renewable diesel from yeast), Virent (green diesel), LS9 (renewable diesel from bacteria), and others emerging in this space.

Where there is cheap sugar, and cellulosic sugars from ag and industrial waste, these commercial ventures will find advantages. Where lower-cost, economically advantaged sugars are available in the U.S., EU, China and India, expect increasing military use for collaborative R&D deployment tests.

Algae 2020, Vol 2 finds a common theme among algae leaders that have progressed into pilot and demonstration-scale projects. In addition to biodiesel and ethanol, these organizations are able to produce drop-in replacement fuels from microalgae, and blue-green algae also known as cyanobacteria and other microbes. Military, aviation, government, and petrochem organizations all demand fungible, drop-in fuels and prefer to work with advantaged producers with scalable technologies for R&D and deployment.

In the capital markets, investors have far more confidence in market demand as a measure of long-term opportunity in transport fuels and petrochemical derivatives. For this reason, the early leaders in advanced algal and microbial fuels are diversifying and targeting existing petrol, diesel and aviation markets, as well as related biofuels markets for green chemicals, polymers and power generation. The diversification of biofuels companies beyond one fuel — ethanol and biodiesel — to include a portfolio of advanced biofuels represents a wise long-term strategy to inspire investor confidence.

Algae 2020, Vol 2 observes an emerging trend in commercial and privately funded algae projects. Increasingly, the focus among start up and VC-backed algae ventures is on high-value products including: livestock and fishmeal, omega 3s, health products, cosmetic and pharmaceutical uses. Most algae farmers seek these highest value products for key addressable markets first, and then plan to scale up operations over time for commercial biofuels production. 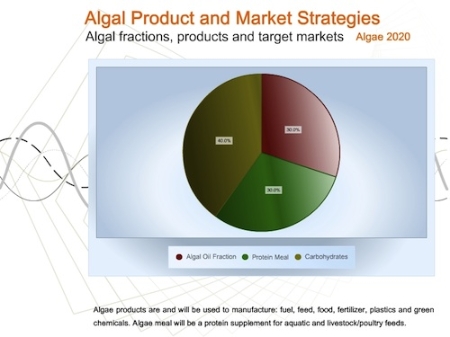 Why are some algae companies attracting capital, and scaling up their enterprises while others continue to peer into the “valley of death” from the laboratory to the pilot phase? Of the 100+ or so companies involved in the algae space, less than 25 have moved from the laboratory to the pilot phase during the economic recession. Few have been able to convince investors to risk placing $10 million USD or more to make this necessary transition.

If an algae venture is not (a) able to demonstrate and prove its technology works on a small scale or (b) produce more than 1000 tons of algal biomass or at least 100 gallons of algal oil with its partners, it is unlikely investors will take serious notice. Notably, some companies have been able to attract investment based on initial proof of concept at the lab/bench scale via strategic partnerships, early-stage VC money, and government grants.

Seaweed has gained favor with petrochemical majors Statoil, Dupont, ENAP because it grows faster than terrestrial crops, has a high sugar content for conversion to ethanol and advanced biofuels, absorbs more airborne carbon than land-based plants, has no lignin, can be easily harvested compared to microalgae, requires no pretreatment for ethanol production, and can be harvested up to six times a year in warm climates.  Seaweed biofuels include ethanol, methanol and biobutanol. BP-Dupont’s Butamax will collaborate with BAL, a leader in the field to produce biobutanol for drop-in fuels and chemicals.

U.S. and EU-based algae producers and licensors of technology are increasingly looking to the Emerging Markets in Latin America, Asia, Africa and the Middle East for faster economic growth, increasing market demand, and more supportive government and regulatory climates for accelerated commercial growth. This follows a key trend by Shell and BP, who invested $12 and $8 billion, respectively in sugar-based conglomerates in Brazil to produce ethanol, bio-butanol, drop-in fuels, and bio-based chemical products.

The most funded or awarded ventures bring together clusters of industry, government, academia, cleantech investors, and producers to share and collaborate on key challenges and opportunities. Some government algae R&D ventures are now phasing into pre-commercial, deployment-stage algae ventures using pond, photo-bioreactor, and fermentation based production systems. Government R&D, deployment, and commercialization support continues to expand into new countries and territories worldwide. 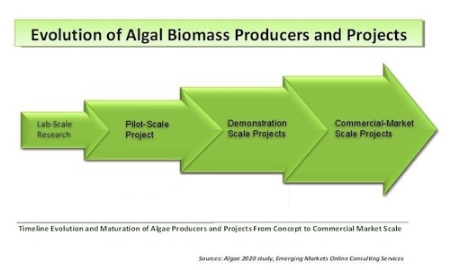 Many pre-commercial, VC and angel-backed ventures are increasingly pursuing a two-pronged strategy. The first strategy seeks to license technology to partners with capital to develop and scale up the pre-commercial enterprise to commercial levels.  This is also known as the capital light strategy. The second strategy is for producers to export technology to local partners in global geographies with advantaged environments for sunlight, operating expenses, market growth, and government support.

Suppliers and buyers are forming early stage R&D relationships in the algae space. Some algae producers now have collaborative R&D partners with big industry players, such as the Exxon-Synthetic Genomics $600 million collaborative for green crude development, the Algenol-Dow for bioproducts, BP-Martek for algae fermentation, Shell-HR Biopetroleum for hybrid PBR-pond development, Chevron-Solazyme for green crude and drop-in fuels and Dupont-BAL for biobutanol from seaweed.

Current economic and regulatory tradewinds in the northern countries of the U.S. and EU are shifting algae technology exports southward and east to Central and South America, Africa, and Asia. An increasing number of partnerships are forming and leveraging advantages in technologies, economies, and geographies.

Long-term tradewinds favor large-scale production supplies of algae from the Americas, the Middle East and Asia with increasing demands for algal biofuels, products and technologies from China and India.