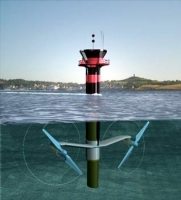 [Strangford Lough, United Kingdom] A UK company has been granted construction approval for installation of a commercial scale tidal energy electric generator that is similar in design to that of an upside down wind turbine, except with two smaller turbines mounted on each side of a monopile.

Marine Current Turbine (MCT) received the approval by the Environment & Heritage Service in Northern Ireland to install its next generation tidal energy device, the 1000 kW SeaGen tidal energy turbine, in Northern Ireland’s Strangford Lough, a tidal estuary channel with considerable energy potential. The SeaGen project, which has received a GBP 4.27 million (USD$ 7.4 million) grant from the UK’s Department of Trade and Industry’s (DTI) technology program, will be installed and connected to the National Grid next year. It has the capacity to generate clean and sustainable electricity for approximately 600 homes. The SeaGen device was developed by MCT’s engineering team in Bristol, and is the brainchild of Professor Peter Fraenkel, MCT’s Technical Director. The project is the latest in a series of prototype designs completed by MCT. “Our work with a smaller tidal device, the 300 KW SeaFlow that was also supported by the DTI and has been running off the north Devon coast for the past two and a half years, has been invaluable in developing SeaGen, the next generation device,” Fraenkel said. “We have shown that it is possible to generate power in a hostile marine environment and to have a negligible effect on marine life. Strangford Lough will demonstrate whether SeaGen has the commercial potential whilst safeguarding the marine environment.” Marine current turbines work, in principle, much like submerged windmills, but driven by flowing water rather than air. They can be installed in the sea at places with high tidal current velocities, or in a few places with fast enough continuous ocean currents, to take out energy from these huge volumes of flowing water. These flows have the major advantage of being an energy resource which is mostly as predictable as the tides that cause them, unlike wind or wave energy which respond to the more random quirks of the weather system. The technology under development by MCT consists of twin axial flow rotors of 15m to 20m in diameter, each driving a generator via a gearbox much like a hydro-electric turbine or a wind turbine. The twin power units of each system are mounted on wing-like extensions either side of a tubular steel monopile some 3 m in diameter which is set into a hole drilled into the seabed. The patented design of the turbine is able to be installed and maintained entirely without the use of costly underwater operations. A unique, patented feature of MCT’s technology is that the turbines and accompanying power units can be raised bodily up the support pile clear above sea-level to permit access for maintenance from small service vessels. This is an important feature because underwater intervention using divers or ROVs (Remotely Operated Vehicles) is virtually impossible in locations with such strong currents as are needed for effective power generation. The submerged turbines, which will generally be rated at from 750 to 1500 kW per unit (depending on the local flow pattern and peak velocity), will be grouped in arrays or “farms” under the sea, at places with high currents, in much the same way that wind turbines in a wind farm are set out in rows to catch the wind. The main difference is that marine current turbines of a given power rating are smaller, (because water is 800 times denser than air) and they can be packed closer together (because tidal streams are normally bi-directional whereas wind tends to be multi-directional). MCT said that Environmental Impact Analyses completed by independent consultants have confirmed their belief that the technology does not offer any serious threat to fish or marine mammals. The rotors turn slowly (10 to 20 rpm) (a ship’s propeller, by comparison, typically runs 10 times as fast). “The risk of impact from the rotor blades is extremely small bearing in mind that virtually all marine creatures that choose to swim in areas with strong currents have excellent perceptive powers and agility, giving them the ability to successfully avoid collisions with static or slow-moving underwater obstructions,” said a statement from the company. It is expected that MCT’s turbines will generally be installed in batches of about 10 to 20 machines. Many of the potential sites so far investigated are large enough to accommodate many hundreds of turbines. MCT said the design life for their tidal turbines will exceed 20 years and they believe the main monopile support structure can be designed to survive for many decades. The steel pile and other main structural elements in an MCT tidal turbine have cathodic protection and the rotor is constructed from glass and carbon fiber reinforced composite materials which are not significantly effected by contact with seawater. “This is a tremendous step forward for tidal energy technology,” said Martin Wright, Managing Director of MCT. “We now have a unique opportunity to comprehensively assess the environmental impact of our technology as well as showcase the commercial potential of tidal stream energy. We are confident that SeaGen will not only prove to be genuinely low in impact and sustainable, but will show that tidal energy can become a commercial reality and will be able to contribute to the UK energy requirements sooner that expected.” The project also has the support of DTI and Northern Ireland ministers. “The UK leads the world in the field of tidal energy and this announcement is a very important step in maintaining that position,” Energy Minister, Malcolm Wicks said. “The Strangford location, together with the expertise of Queens University of Belfast who will manage the monitoring program, will afford a unique opportunity to further our understanding of the true environmental impact as well as the generation potential of these new technologies. Projects like SeaGen are exactly the type of scheme we have to replicate in order to develop a world class UK industry.” Last month, the DTI published the consent process that is required to get marine renewable energy prototypes in English and Welsh waters and highlighted the GBP 50 million (USD 87 million) package of financial support that is available from the deployment fund.