In 2009, geothermal energy appeared to be on a launch trajectory. Six new geothermal plants came online in the United States and another 144 were under development, raising the prospects of 10 gigawatts (GW) of geothermal power in coming years. Geothermal power projects were being developed at an accelerating rate, despite the economic recession.

Federal and state policies for renewable energy production, tax incentives, leasing and permitting and research have all been fundamental to geothermal development; and in 2009 there were major, positive new developments in all of these areas.  So, it was not a surprise that GEA’s 2009 Geothermal Energy Expo set record attendance and exhibitor participation figures, or that the GEA workshops and events had standing-room-only crowds.

The outlook for 2010 is for even stronger growth in the industry, continued progress with new technology, and even greater priority from federal and state policymakers as they tackle the challenge of the 21st century — global warming.  As 2009 comes to a close, these new projects, new policies and new technologies all point to dynamic growth for geothermal energy in the U.S. in coming years.

Six new geothermal projects came online in 2009, representing growth of U.S. geothermal power capacity by about 6%.  Together, these projects mean that 176.68 MW of geothermal capacity was placed in service in 2009.  They represent an investment of roughly $800 million, 750 full time jobs, and 2,827 jobs related to project construction, drilling and manufacturing, according to GEA research data.

GEA invited the DC energy policy and technology community to a gathering at the Newseum in Washington DC where they could get a glimpse of U.S. geothermal energy projects that are under development in the West. Leading geothermal companies shared their new geothermal projects via video footage, both those near completion and those just coming online. New projects in 2009: 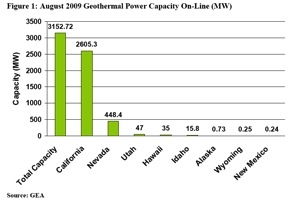 The number of geothermal projects that came online in 2009 marks the beginning of accelerated growth for new projects, making it a take-off year for a new era of geothermal growth.  The projects underway in 2009 will add up to 140 MW of new geothermal power in fourteen states.

Geothermal energy has historically been used for electricity production and commercial, industrial and residential direct heating purposes.  Recent years have seen growth in efficient home heating and cooling through geothermal heat pumps. In 2009, the U.S. also took major steps towards advancing geothermal technology through investment in Enhanced Geothermal Systems (EGS).  Additionally, inaugurated this year were two projects that would utilize hot water produced by oil and gas wells to produce geothermal power. Located in Louisiana and Mississippi, these are the first geothermal power production projects for these states.

These oilfield co-production projects are two of the five projects now underway in the U.S. utilizing geothermal hydrocarbon co-production: Jay Oil Field in Florida, Rocky Mountain Oil Test Center in Wyoming, GCGE Oil Co-production in Mississippi, GCGE Natural Gas Co-production in Louisiana and Florida Canyon Mine in Nevada. Researchers at Southern Methodist University believe that oilfield co-production can become an important source of power.  They have identified potential areas in other parts of the U.S. where similar developments could bring thousands of megawatts of new power online.

The U.S. Department of Energy (DOE) has invested more than $5 million in a demonstration project for EGS at Desert Peak, Nevada. This first commercial EGS operation will increase the plant’s capacity by 5 MW. DOE has also selected other EGS projects for federal funding (see the section on DOE initiatives below).

A 2006 report by the Massachusetts Institute of Technology, The Future of Geothermal Energy stated that EGS technology “could supply a substantial portion of the electricity the United States will need in the future, probably at competitive prices and with minimal environmental impact.”

The stunning progress of the geothermal industry this year was driven in large part by state and federal policies.  The keys to geothermal development established over past years have been (1) state renewable energy standards that provide markets for renewable power, (2) federal tax credits and incentives that attract investors and bring down the upfront costs of projects, (3) federal and state land availability, which means active and timely leasing and permitting programs and (4) research, development and deployment support from the DOE.  Key policy developments in 2009 that underpin geothermal progress addressed all four of these areas.

On the state level, the two largest markets for geothermal energy are California and Nevada.  In 2009, California increased its renewable standard to 33% by 2020. Nevada has extended its renewable energy standard to 25% by 2025.  Utilities are looking to geothermal energy to fill these needs. In California, one new project came online in 2009 with a 50-MW capacity, and 37 geothermal projects are underway with a combined capacity of 1841.8–2435.8 MW. In Nevada, three new power plants with a total capacity of 115.4 MW went online and 64 projects are underway for another 1876.4–3473.4 MW. Developments in these states are an example that others are following.

Early in 2009 Congress extended the Production Tax Credit for new geothermal plants to 2013 and extended a 30% Investment Tax Credit to qualifying geothermal projects, and made a cash grant in lieu of the 30% ITC available to qualifying geothermal projects.  Together these powerful financial incentives will have an impact that will be felt over the next few years, reminiscent of trends after a 2005 decision to extend the production tax credit to geothermal energy (it was previously only available to wind projects).

In July of this year, the Bureau of Land Management (BLM) held lease sales for geothermal development on 255,355 acres land in Nevada, California and Utah that brought in revenue of approximately $9 million.  The geothermal lease sales held by the BLM over the past year were made possible by a major Programmatic EIS for Geothermal Leasing in the Western United States completed in October 2008 by the Department of the Interior and the U.S. Forest Service. Prior to that EIS, 190 million acres of potential lands had been unavailable simply because BLM had not conducted the necessary reviews; by the end of 2009, BLM had over 1.2 million acres under lease for geothermal power development!

Research, development and deployment support at DOE is managed through its Geothermal Technologies Program, a program crucial to the industry that had been a matter of concern since the Bush Administration proposed to terminate the program in 2006.  Congress kept the program alive and authorized a new program in the 2007 Energy Bill, but funding and direction were still limited.  In 2009, as part of the ARRA stimulus legislation, Congress appropriated $400 million for the DOE Geothermal Technologies Program.  Just last month, the DOE announced pending awards of $338 million to over 123 geothermal projects in 39 states, including the first demonstration projects in the U.S. for EGS technology.

In an Historic Shift, DOE Ramped Up Geothermal Efforts

While all of the federal and state policy developments in 2009 were important to the industry, the changes at DOE marked an historic shift.  One of the unique geothermal initiatives in 2009 was DOE’s initiative that infused major new resources to spur geothermal technology across the board.  For the first time in over 25 years, DOE was putting significant resources behind its geothermal efforts.

In October, DOE Secretary Steven Chu announced up to $338 million in ARRA funding for the exploration and development of new geothermal fields and research into advanced geothermal technologies.  These grants will support 123 projects in 39 states, with recipients including private industry, academic institutions, tribal entities, local governments and DOE’s National Laboratories.

As the DOE explained, “the projects selected for negotiation of awards fall in six categories”:

When completed, these projects will represent a federal-private total of $691 million invested in new geothermal technology and applications.

The 2009 Geothermal Energy Expo, held in Reno, Nevada in October, boasted 120 exhibitors, 40 more than in 2008. Individuals, new start-ups and well-established companies showed that they are interested in geothermal energy and planning to develop it in record numbers. GEA estimates show roughly 2,300 people walked the 2009 Expo floor, up from 1,700 in 2008. Visitors came from across the U.S., Iceland, France, Germany, Italy, Turkey, Indonesia, Canada, Australia, New Zealand, the Philippines and Chile.

As the national trade association for the geothermal industry, GEA provides events to educate participants and to provide a setting for networking. Beyond the annual expo, three GEA workshops in 2009 catered to sold-out audiences. A multimedia showcase of geothermal projects brought field developments to the energy community in Washington, DC in May. Developers and financiers converged for a finance workshop in Seattle in June, and a third workshop in Klamath Falls, Oregon in August explored small power and direct use capacities of geothermal development.

Click here for information about GEA activities and events.

Outlook for 2010 and Beyond

GEA’s staff consulted its crystal ball and predict that in 2010:

Stay tuned to all of the developments in the geothermal field by reading GEA’s newsletter, the Geothermal Energy Weekly.  Email the organization to sign up to receive it.