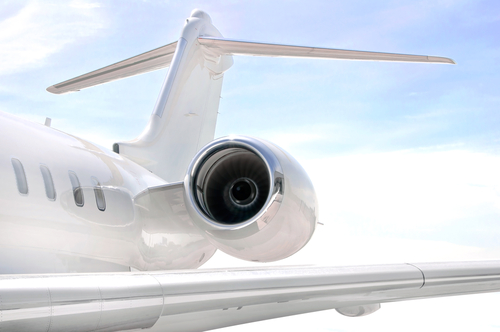 As renewables are moving from niche to mainstream, the industry is facing a paradigm shift in cost, quality, complexity, and scale ­— creating opportunities to develop new and different technologies and operating models. Achieving the next phase of the industry potential will require a further revolution, not only in the laboratory but also in strategy, technology, and operations. Some of these organizations preferred to generate transportation fuel from non-fossil resources with a pivot towards more tangible chemicals. With a further pivot now the direction is towards renewable jet fuels.

The idea here is to prioritize for biofuel applications in industries ­— which do not have feasible alternatives to liquid fuels, such as aviation and shipping. Road transport, for example, has the possibility of electric power, whereas jet aircraft do not have an alternative to liquid fuels in the near- to medium future. Toyota Motor Corp. recently announced that by 2050, it aims to reduce global average new-vehicle CO2 emissions by 90 percent ­— switching to alternatives such as gas-electric hybrids, fuel cell and electric vehicles ­— with more in the automobile industry joining the bandwagon across the globe.

Jet fuel conventionally is produced from petroleum crude refining. Its composition depends on the raw crude oil, but the composition is typically around 20 percent paraffins, 40 percent isoparaffins, 20 percent naphthenes and 20 percent aromatics. Each component has a specific role towards critical fuel requirements. For example, the high hydrogen-to-carbon ratio of paraffins and isoparaffins enhance the heat density per unit mass of fuel; naphthenes help to reduce the freeze point, which is critical at high altitudes; while the aromatics contribute to material compatibility and prevent leaks in the seals of some aircraft models.

Jet fuel specifications are defined in the U.S. and Europe by two alternative standards: ASTM D1655 of the American Society for Testing and Materials (ASTM) and Def Stan 91-91 of the UK Ministry of Defense. Other commonly used specifications are the Joint Check List (AFQRJOS) and GOST 10227 TS-1. These specifications are broadly equivalent and focus primarily on performance properties rather than chemical composition, due to the complexity and variability of the latter. Several fuel requirements have been identified as being particularly key to the development of aviation biofuels, namely: energy content, freeze point, thermal stability, viscosity, combustion characteristics, lubricity, material compatibility and safety properties.

As of today, there are essentially five conversion pathways that have the potential to produce a drop in alternative for fossil kerosene; Fischer-Tropsch (FT) process, Hydro-processed Esters and Fatty Acids (HEFA) process, Direct Sugar to Hydrocarbon Conversion (DSHC), Direct Liquefaction, and Alcohol-to-Jet (AtJ). (See Table.) Next to these, there are several other production pathways that yield liquid fuels, although it is uncertain to which extent these fuels can be used as drop in alternative to fossil jet fuel. These are:

Thus far, certification has only been granted to FT and HEFA processes with a recent push within the industry towards the AtJ ­— stemming from the ubiquitous ethanol to butanol to jet.

Synthetic jet fuels (including renewable) and blends are specified by standards ASTM D7566, established in 2009. Specific fuel blends certified for commercial use are added to the standard as an annex. These drop-in fuels are considered to be equivalent to conventional jet fuel (ASTM D1655) and can be mixed in aircraft and supply infrastructure without the need for separate tracking or approval. A further standard, ASTM D4054, provides guidance on the testing and property targets necessary to evaluate a candidate alternative fuel. Biofuel producers wishing to certify their product must collate the data required by D4054 in a research report and submit this to engine and airframe manufacturers (original equipment manufacturers, OEMS) for review. If the fuel is approved by the OEMs it is balloted to the ASTM’s membership for approval to develop an annex to D7566, Exhibit 1. 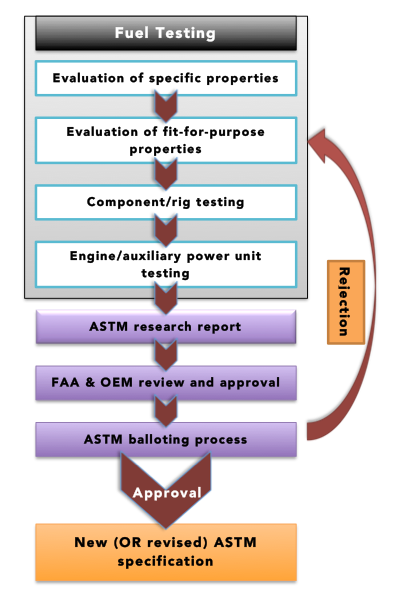 As of February 2016, more than 50 routes of commercial flights have used or tested bio-based fuels as a portion of their fuel source, and the number of flights that have used biofuels or are contemplating its use in near future continues to increase. One of the largest hurdles within the industry is a purchase contract. Purchase contracts to date are for one-year terms with the idea to move to five years for alternative fuels. Industry experts have realized that five-year contracts are not sufficient to stimulate the private capital market or potential alternative fuels suppliers to construct or expand production facilities. Purchase contracts of at least 10+ years in duration could potentially stimulate additional capital investment in alternative fuels production beyond the small volumes currently planned in response to commercial demand. The length of the contract term is only one of many factors that prospective investors would assess in their evaluation of financial risk and return.

The second major hurdle is with the policies for commercialization of aviation biofuels — with difference in incentives for renewable fuels related to on-road applications and aviation use. The on-road applications have been encouraged by several measures (e.g., tax breaks and mandates), but these measures do not differentiate between the qualities of the biofuels; it is left up to the market operators to use any biofuel as long as the sustainability criteria of the Renewable Energy Directive (RED) and the relevant technical specifications are met.

Regarding the aviation incentives, the only mechanism that has been introduced so far qualifies aviation biofuel as non-CO2 emitting fuel within the Emission Trading Scheme (ETS). The benefit of such incentive is undermined by the current difficulties on ETS application to the aviation sector. Therefore, there are no comparable incentives, neither for using biofuels in aviation nor for production of bio-kerosene blend stock.

In aviation only high physical quality biofuels (e.g., those with low freezing point) can be used to ensure the operability of the jet engines. Current political framework and the international competition has lead to a paradox situation, where high quality biofuels are finding applications in road transport although lesser quality biofuels could also satisfy the road transport needs while they cannot be used in aviation yet due to the absence of any incentive besides the intermittent test samples.

These parameters and initiatives are not an end stadium; they are constantly evolving due to increased insights on both production and demand side and improvements in technology. The development and deployment of comprehensive sustainability frameworks, certification and verification will thus take more time. Now, it is time to find novel solutions for some of the world’s toughest upgrading challenges, which include policies and mandates around the world.