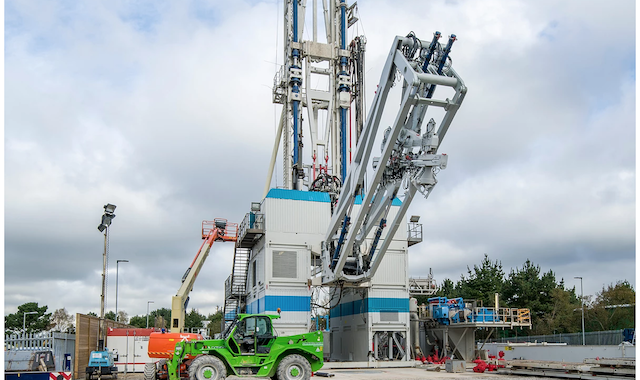 Geothermal Engineering Ltd. (GEL) announced that drilling for the UK’s first deep geothermal electricity plant at the United Downs Industrial Estate near St Day in Cornwall began last week.  The aim of the initiative is to demonstrate the potential of the geothermal resource in the UK to produce electricity and renewable heat.  The plant will have a capacity of up to 3 MW.

Arup signed an agreement to purchase renewable energy guarantee of origin certificates (REGOs) from GEL equating to 9000 MWh/year. REGO is a UK government sponsored scheme that enables companies to secure green energy for their operations.

Two deep geothermal wells will be drilled into the granitic rock beneath the site, the deepest of which will reach a ground-breaking 4.5 kilometers.  Water will be pumped from the deepest well at a temperature of approximately190°C, fed through a heat exchanger at the surface and then re-injected into the ground to pick up more heat from the rocks in a continuous cycle. The extracted heat will be converted into electricity and supplied to National Grid.

Watch a video of drilling at the site below.

GEL hopes that it will be able to repeat this approach at other suitable sites in Cornwall and Devon. The proposed plant is following on from the success of similar plants in Insheim and Landau in Germany.

Dr. Ryan Law, Managing Director of Geothermal Engineering Ltd, said, “The largely untapped geothermal resources in the UK have the potential to deliver up to 20 percent of the UK’s electricity and heat energy needs in a reliable and sustainable way.  As coal fired power stations are switched off, the need for renewable, baseload energy can only increase. It is incredibly exciting to see this pioneering project getting off the ground in what we hope will be the start of many similar initiatives across the UK.”

Nigel Tonks, Arup’s UKIMEA Sustainable Development Director, said, “As well as taking responsibility for reducing their carbon emissions, companies can encourage the renewable energy market by securing low carbon renewable energy supplies. We believe geothermal energy has huge potential to contribute to the UK’s renewable energy sources and that’s why we’ve been investing in geothermal technologies since 2013. This agreement contributes significantly to our efforts to reduce the carbon footprint of our UK operations. We believe this project will stimulate the growth of geothermal plants in the UK.”

The project has received approximately £18 million in funding, including £10.6 million from the European Regional Development Fund, £2.4 million from Cornwall Council, £5 million from private investors through Abundance Capital.  Delivery partners for this project include GeoScience Ltd, The British Geological Survey, and the University of Plymouth Sustainable Earth Institute, all working to further the viability of geothermal energy as a renewable energy resource in Britain.