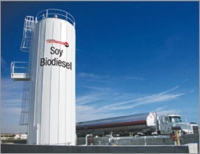 San Diego, California [RenewableEnergyAccess.com] From military fleets to long-haul truckers, farm equipment to heating oil supplies, and of course, in diesel vehicles’ gas tanks, biodiesel is cropping up all over the U.S. as the clean fuel made primarily from soybeans experiences breakneck growth. This rapidly maturing business was clearly visible in San Diego, California, last week at the industry’s national conference and trade show.