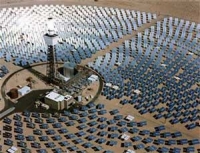 From the passage of SB1 in California to a solar cell breaking the 40 percent efficiency barrier to a record year for wind power in the U.S., Canada and UK, renewable energy made tremendous strides over the past 12 months. So, to welcome in the New Year, we’re recapping some of the highlights of 2006.

Million Solar Roofs Bill Signed into Law After a long roller-coaster ride in the California legislature, the Million Solar Roofs Bill, SB1, became law when Governor Schwarzenegger, who campaigned on a pledge to create a major solar program, signed the bill in August. Solar Cell Breaks the 40% Efficiency Barrier A photovoltaic (PV) cell achieved a milestone in December with a conversion efficiency of 40.7 percent. Produced by Spectrolab, Inc. — a wholly owned subsidiary of Boeing — and funded in part by the U.S. Department of Energy (DOE), the breakthrough could lead to PV systems with an installed cost of $3 per watt and produce electricity at a cost of $0.08 to $0.10 cents per kilowatt-hour. Key Tax Bill for Renewables Passed by Congress The U.S. Senate approved the “Tax Relief and Health Care Act of 2006” by a vote 79-9, thereby extending many of the tax credits that benefit the renewable energy industries. President Bush signed the bill into law in December. SunPower to Acquire PowerLight SunPower Corporation, a manufacturer of solar cells and panels, announced in November that it had signed a definitive agreement to acquire PowerLight Corporation, a global provider of large-scale solar power systems. The deal is valued at $332.5 million. Australia to Build 154 MW Solar Energy Plant In the face of overwhelming scientific evidence, the Australian Government made a significant change in its energy policy this past October by announcing it will contribute AUS$ 75 million [US$ 57 million] toward building the world’s largest solar energy plant as part of its recently unveiled renewable energy package. Virgin Group to Invest $3 Billion in Renewable Energy Out of an estimated $7.3 billion pledged to address issues such as poverty, disease, conflict and climate change at the Clinton Global Initiative (CGI) in September, nearly half of it will go toward renewable energy projects thanks to a $3 billion pledge by British business mogul Sir Richard Branson. UK Offshore Wind Projects Given Green Light The British government gave the go-ahead for two major offshore wind farms — the London Array and the Thanet — to be built off the southeast coast of England in the Thames Estuary in December. Together, the projects will boast more than 400 turbines and are expected to produce up to 1.3 gigawatts of electricity when fully operational. Biodiesel Edges Out Ethanol Five University of Minnesota researchers took a stand in the long-running debate over whether ethanol from corn requires more fossil fuel energy to produce than it delivers. Their answer? It delivers 25 percent more energy than is used (mostly fossil fuel) in producing it, though much of that 25 percent energy dividend comes from the production of an ethanol byproduct, animal feed. The Rebirth of Concentrating Photovoltaics The Concentrating Photovoltaics (CPV) industry will soon take up a larger share of the solar market as technology improves, investment pours in and cost comes down, according to leading CPV manufacturers at the Solar Power 2006 conference and expo. Selling Solar to Mainstream America When the clock strikes midnight on January 1, 2007, SB1, California’s new state law that provides $3.2 billion in funding to build a million solar roofs over the next ten years, will officially take effect. But in order for SB1 to succeed — and the solar industry as a whole to continue to expand — it’s time to start marketing solar power as an accessible, aesthetically pleasing, and cost-effective product to the average consumer, according to California Senator Kevin Murray. Solar Energy Milestone Reached in the Arizona Desert In the Arizona desert, 30 miles north of Tucson, the first Concentrating Solar Power (CSP) trough-style energy facility to be constructed in nearly two decades officially went online in April and began delivering power to the U.S. grid. The rows of gleaming mirrored troughs that power a one-megawatt (MW) generator represent a new phase for solar energy in Arizona and the broader U.S. Solar Power 2006 Overview, Vinod Khosla on Proposition 87 In October, we were podcasting to you from Solar Power 2006 — the largest solar conference and expo in the U.S. — and we captured that mood in our audio postcard. Also in the podcast, an exclusive interview with Vinod Khosla of Khosla Ventures on the importance of California’s renewable energy ballot initiative Proposition 87. Is there a news story you think should be included in the list? Have a thought on what the year 2007 will bring for the renewable energy industry? Let us know in the Reader Comment section below.