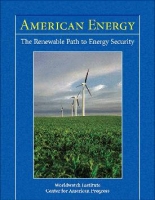 American Energy: The Renewable Path to Energy Security, a report just released by the Worldwatch Institute and the Center for American Progress, details how the emerging renewable energy industries can address U.S. energy demands, national security, and the environment, as well as similar concerns around the globe.

The following is excerpted from the report’s Introduction, titled “21st Century Energy.” If there was ever a time when a major shift in the U.S. energy economy was possible, it is now. Three decades of pioneering research and development by both the government and the private sector have yielded a host of promising new technologies that turn abundant domestic energy sources — including solar, wind, geothermal, hydro, biomass, and ocean energy — into transportation fuels, electricity, and heat. Today, renewable resources provide just over 6 percent of total U.S. energy, but that figure could increase rapidly in the years ahead. Many of the new technologies that harness renewables are, or soon will be, economically competitive with the fossil fuels that meet 85 percent of U.S. energy needs. With oil prices soaring, the security risks of petroleum dependence growing, and the environmental costs of today’s fuels becoming more apparent, the country faces compelling reasons to put these technologies to use on a large scale. Energy transitions take time, and no single technology will solve our energy problems. But renewable energy technologies, combined with substantial improvements in energy efficiency, have the potential to gradually transform the U.S. energy system in ways that will benefit all Americans. The transition is easier to envision if you look at the way the oil age emerged rapidly and unexpectedly in the first two decades of the 20th century, propelled by technologies such as refineries and internal combustion engines and driven by the efforts of entrepreneurs such as John D. Rockefeller. Americans today are no less clever or ambitious than their great-grandparents were. A new and better energy future is possible if the country can forge a compelling vision of where it wants to be. Recent developments in the global marketplace show the potential: — Global wind energy generation has more than tripled since 2000, providing enough electricity to power the homes of about 30 million Americans. The United States led the world in wind energy installations in 2005. — Production of electricity-generating solar cells is one of the world’s fastest growing industries, up 45 percent in 2005 to six times the level in 2000. — Production of fuel ethanol from crops more than doubled between 2000 and 2005, and biodiesel from vegetable oil and waste expanded nearly four-fold over this period. Global investment in renewable energy (excluding large hydropower) in 2005 is estimated at $38 billion — equivalent to nearly 20 percent of total annual investment in the electric power sector. Renewable energy investments have nearly doubled over the past three years, and have increased six-fold since 1995. Next to the Internet, new energy technology has become one of the hottest investment fields for venture capitalists. These dynamic growth rates are driving down costs and spurring rapid advances in technologies. They are also creating new economic opportunities for people around the globe. Today, renewable energy manufacturing, operations, and maintenance provide approximately two million jobs worldwide. The United States will need a much stronger commitment to renewable energy if it is to take advantage of these opportunities. …This vision will become reality only if Americans come together to achieve it, mobilized behind the goal of increasing our national self-reliance and leaving a healthy environment for the next generation. The time is now. The Worldwatch Institute, one of the partners for this report, is an independent research organization that focuses on innovative solutions to global environmental, resource, and economic issues. The other partner is the Center for American Progress, a nonpartisan research and educational institute dedicated to promoting a strong, just and free America that ensures opportunity for all.