More
Home Baseload Bioenergy The Sustainability of a Bioeconomy 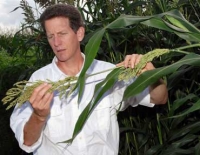 Ames, Iowa [RenewableEnergyAccess.com] This spring farmers responded to the ethanol industry’s demand for grain by increasing their corn acreage by 19 percent over last year, according to U.S. Department of Agriculture estimates. What if that happens again next year?

What if farmers decide against crop rotations and plant corn on the same fields, year after year? Or, what if farmers begin growing biomass crops such as switchgrass for the production of ethanol from plant fiber?

Will soil lose fertility? Will erosion increase? Will the amount of energy needed to produce biofuels go up or down? Will farm income increase or decrease? Will the bioeconomy be sustainable?

Robert Anex, an Iowa State associate professor of agricultural and biosystems engineering and associate director of Iowa State’s Office of Biorenewables Programs, is working to answer those and other questions about the transition to an agriculture that produces biomass as well as food and fiber.

One answer is that American agriculture is likely to change.

“It may well be that the development of biomass-based crops production systems can have as profound an impact on agriculture and its environmental footprint as it does on energy security and the global climate,” Anex and co-authors Andrew Heggenstaller and Matt Liebman of Iowa State’s agronomy department and Lee Lynd and Mark Laser of Dartmouth College wrote in a recent paper. “Whether this is a positive impact or a negative impact will depend largely on how biomass feedstocks are produced and converted, and the extent to which these two activities are integrated.”

Their paper, “Potential for Enhanced Nutrient Cycling through Coupling of Agricultural and Bioenergy Systems,” was recently published online by Crop Science, the official publication of the Crop Science Society of America.

The paper reports that as much as 78 percent of the nitrogen fertilizer needed for crops could be recovered from an integrated biological and thermochemical process that converts switchgrass to ethanol. The study says such nutrient recovery and recycling could significantly improve the sustainability of biomass production and the amount of energy required to produce ethanol from plant fiber.

The researchers say the nutrient recovery could happen this way: Plant fiber would be converted to liquid fuels by pre-treatments and fermentation. The co-products of fermentation would be dried and heated to turn the solids into gases. The gasification would leave plant nutrients in the resulting ash and ammonia. The nutrients in both streams could be recovered and returned to the fields that produced the biomass.

And that potential for nutrient recycling means there’s potential for a new kind of agriculture feeding a sustainable bioeconomy.

“By creating a large, new domestic demand for agricultural products, the advent of commercial-scale conversion of biomass into ethanol and other industrial chemicals is likely to have a strong influence on the design of agricultural systems,” the researchers wrote. “The possibility of recycling nutrients from the biorefinery to the agricultural system that produces the feedstock may allow substantial improvements in both sustainability and production efficiency.”

But, sustaining biomass production is a complex system that depends on many variables such as soil type and slope, soil organic matter and the amount of biomass actually harvested.

To help farmers begin to understand how collecting biomass from their fields may affect soil fertility, erosion, energy needs, labor and the bottom line, Anex and a team of Iowa State researchers have added bioeconomy elements to I-FARM, a Web tool that helps farmers simulate and plan various changes to their operations.

In one simulation, the I-FARM research team studied the effects of harvesting corn stalks and leaves on three farms in northwest Iowa’s Palo Alto County. One grain farm harvested no stover, one harvested 1,809 dry tons of stover a year and the other harvested 3,077 dry tons a year.

The simulations found the farm that harvested the most stover also needed the most fertilizer, had the most erosion and barely returned sustainable levels of organic matter to the soil. That farm also recorded the highest net farm income before taxes.

The studies are helping researchers answer some questions about the sustainability of agriculture in a bioeconomy, Anex said. But there are still lots of questions about how everything in a new agricultural system would fit together.

“Despite the promise of alternative crops and cropping systems as well as the nutrient recovery and recycling concepts examined here, there are still many questions that remain about their practical implementation,” Anex and the other researchers wrote in their paper. “The issues that have been addressed here and the questions that have been raised are only a small subset of those that must be addressed if we are to usher in a new and beneficial agricultural revolution.”