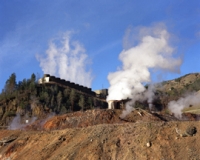 Washington, D.C. [RenewableEnergyAccess.com] A new report released last month by the Geothermal Energy Association assesses the state of geothermal energy technologies and concludes that subsurface technologies are the key to developing the vast potential resource base around the world.

The report, entitled The State of Geothermal Technology, Part I: Subsurface Technology, examines how companies today are trying to find and exploit geothermal heat under the ground. It follows and explains the series of steps that geothermal developers take — from exploration to resource confirmation. It was built upon interviews and site visits with companies actively developing projects, and portrays the state of geothermal technology from their perspective.

“There is significant, untapped geothermal potential that can be effectively developed with today’s technology,” said the report’s author Mark Taylor. “But to unlock the vast potential of the resource — involving hundreds of thousands of megawatts of energy — will require an investment in developing new technologies that allow us to find hidden resources and utilize unconventional sources of heat.”

In the longer-run, the report points to some new and emerging geothermal technologies, such as Enhanced Geothermal Systems (EGS). In addition, the potential of producing energy from hot water co-produced from oil and gas wells, deep volcanic or supercritical resources, and geopressured systems that hold both hot water and natural gas are highlighted as potentially significant future energy sources.