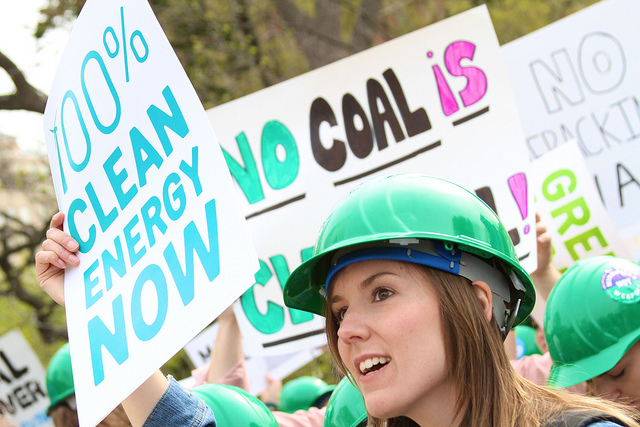 While climate change has been recognized as an urgent, global issue, the relevance of increasing the visibility of women in clean energy as a solution to advancing our climate goals is rarely discussed. Around the world, the energy industry remains one of the most gender-imbalanced sectors according to a 2014 white paper by the U.S. Agency for International Development, “Women at the Forefront of the Clean Energy Future.” In Australia, women make up 15 percent of the mining industry, including coal; in the U.S., the number is 20 percent and in Canada its 25 percent.

Estimates for women working in wind, solar, wave, and other renewable energies are somewhat higher — as high as 33 percent in some parts of the world, according to the International Renewable Energy Association, in part because these energy sources are still considered new and non-traditional. That helps counter the stigma that women around the globe still experience when they attempt to work in traditionally male roles. But improving on these numbers is just one small part of what is needed for women to achieve equity as we move toward a clean energy revolution.

Around the world, a number of key initiatives are underway to ensure that women become more visible in dealing with the international climate impacts, financial gains and policy shifts that are moving us closer to our collective clean energy future. Studies and reports show that one of the reasons women are reluctant to enter STEM careers or to remain in energy roles once they have started their careers is a lack of role models.

To date, 10 CEM governments have named a total of 59 C3E — including myself. In the U.K., we are implementing the ideals of C3E through our POWERful Women (PfW) program. In addition to being a mentoring program for women in the energy sector, PfW connects industry and government and has created a toolkit to help companies make pledges and deliver on goals to improve gender diversity in the energy sector.

Across agencies and around the world, the role of women in accelerating our clean energy future is increasing, in part due to greater attention and investments. The International Union for the Conservation of Nature and USAID has created the Gender and Renewable Energy Network (G-REEN) Platform, a knowledge and resource hub for best practices related to integrating gender in the renewable energy sector. In Sweden, a group of women started Quinnovindar, a co-op to help develop wind companies. In Vietnam and West Africa, there is a narrower gender divide in engineering training. In India, where the caste system often determines who can and cannot participate in energy conferences, the first Dalit solar engineer has recently broken through that system to secure her training.

Data show that women around the world bring much more to the table when it comes to clean energy than their roles as homemakers — companies with equitable gender representation perform better than businesses where there are too few women. But beyond a financial imperative or even an innovation imperative, bringing women closer to equity in the clean energy sector is a moral imperative. As U.S. Department of Energy Secretary Ernest Moniz has said, C3E began to capture the full strength of our society in order for us to successfully combat climate change. As we include more women in the clean energy sector, it is important to remember that much of that strength comes from including women in what is sure to be an even more crucial conversation for many years to come.

This article was originally published by GreenBiz and was republished with permission.