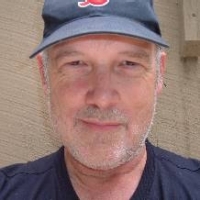 Five years ago, when a gallon of gas was around $1.79 and home heating oil was 85 cents, I thought then that these prices were too high and began to research viable alternatives to heat a home.

Certain criteria had to be met: 1) The solution had to be renewable energy and 2) It had to completely take over the heating of the home. i.e. Stop the oil truck from backing up the driveway!

All renewable energy options were looked into. Solar, wind, alternate fuels. It didn’t take long for the list to become very short. Sure, I could put solar photovoltaic panels on my roof and on racks in the back yard and thus could probably get off the grid, but to convert to electric heat would have required me to buy more land for the racks of panels needed. The same would be true for wind turbines. And both would not perform well if the sun was not out or the wind was not blowing. I had to find a renewable energy solution that would run 12 months of the year, here in New England, and not care what the weather was doing.

The only solution was geothermal energy. What is it? Geothermal energy takes the heat from the earth, transfers that heat within a heat pump which provides heat to the home. In New England, that heat is in the form of water taken from the ground via a well 500′ down (most of us have one of these). From that depth, the average temperature of the water is 52 degrees. This is enough heat to heat your home via a heat pump all year round.

So how does a heat pump work? What if I told you that we all have a heat pump in every home in New England! Well, we do. It’s called a refrigerator. Say you place a warm liter of Pepsi in the refrigerator. What happens to it? It gets cold doesn’t it? Well, where does the heat from the warm bottle go? Check the grate at the bottom or top of the frig. That’s where it goes, warm air, back into the room! Now, your frig isn’t going to heat your home, but the warm Pepsi is doing the same thing as the water coming from the well — 52 degrees is enough heat to allow the heat pump to raise the temperature to what your thermostat is set to. And that water, after it has made a little cooler by the heat pump, is then returned to the well to be re-heated by the earth, and the process starts all over again.

Oh, a couple of side points; during the summer (if you have FHA) the same geothermal system will give you air conditioning as well, and all homes get domestic hot water as a by product!

Most home owners are able to reduce their home annual energy costs by an average of 75%. Hard to believe, isn’t it? I felt the same way. I read all the case stories and then found a confirming document produced by PSNH entitled, “Comparison of Heating Systems/Fuels.” This showed an estimated annual heating cost for a typical 2000 sq ft home in NH and used PSNH’s current rates and fossil fuel prices as of 7/5/06. Here are their numbers: (remember, this chart reflects heating only) 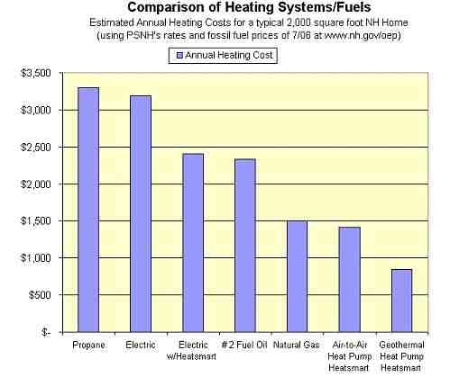 But I still had to find out if Geothermal energy is actually in operation around New England.

Water Energy is a distributor of Climatemaster Geothermal Heat Pumps and is one of the largest geothermal distributors in New England. I met with the president of the firm and he told me his company has been involved in over 11,000 installations in New England and NY state.

I call geothermal the quiet solution because installations are all around you and you don’t even know it. There are no panels on the roof or turbines in the yard. The system is made up from the well and the heat pump is in the basement.

Is geothermal expensive? Well, yes if it’s a retro, no if it’s new construction. But let’s consider the replacement costs. Even when fuel costs were at the 2006 levels as seen in the previous PSNH data, homeowners with geothermal were able to pay off their investment after about 7 years of energy savings! With current energy prices, that payoff is probably closer to 6 years now.

My last two estimates for clients resulted in both having cash in hand after merging the geothermal costs into their mortgage. And, on another point, if you remodeled your kitchen would it be expensive? Sure, but you could estimate how it increased the value of your home. I would contest that installing geothermal will also increase the value of your home while also greatly reducing your energy costs each year.

And geothermal energy is not just for homes. Schools, businesses and town offices can all heat and cool with geothermal.

As in any large project, get references, do your homework. Visit www.geoexchange.org, this is a non-profit group in Washington, DC dedicated to the promotion of Geothermal as a major renewable energy solution.

Don Edson is an Energy Consultant with Bill Wenzel Heating and Air Conditioning in New Hampshire.