Cambridge, Mass. — Where the river meets the sea, there is the potential to harness a significant amount of renewable energy, according to a team of mechanical engineers at MIT. 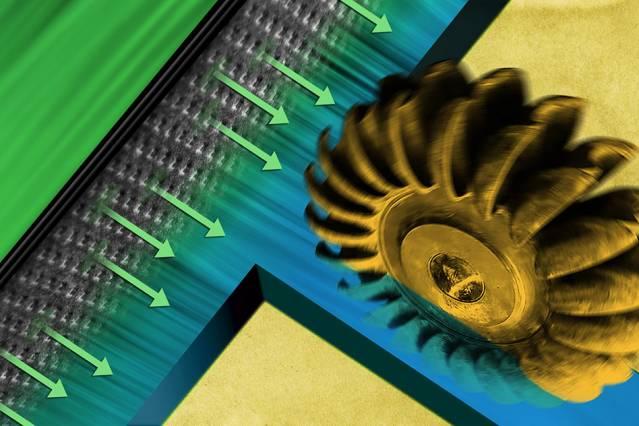 The researchers evaluated an emerging method of power generation called pressure retarded osmosis (PRO), in which two streams of different salinity are mixed to produce energy. In principle, a PRO system would take in river water and seawater on either side of a semi-permeable membrane. Through osmosis, water from the less-salty stream would cross the membrane to a pre-pressurized saltier side, creating a flow that can be sent through a turbine to recover power.

The MIT team has now developed a model to evaluate the performance and optimal dimensions of large PRO systems. In general, the researchers found that the larger a system’s membrane, the more power can be produced — but only up to a point. Interestingly, 95 percent of a system’s maximum power output can be generated using only half or less of the maximum membrane area.

Leonardo Banchik, a graduate student in MIT’s Department of Mechanical Engineering, says reducing the size of the membrane needed to generate power would, in turn, lower much of the upfront cost of building a PRO plant.

“People have been trying to figure out whether these systems would be viable at the intersection between the river and the sea,” Banchik says. “You can save money if you identify the membrane area beyond which there are rapidly diminishing returns.”

Banchik and his colleagues were also able to estimate the maximum amount of power produced, given the salt concentrations of two streams: The greater the ratio of salinities, the more power can be generated. For example, they found that a mix of brine, a byproduct of desalination, and treated wastewater can produce twice as much power as a combination of seawater and river water. 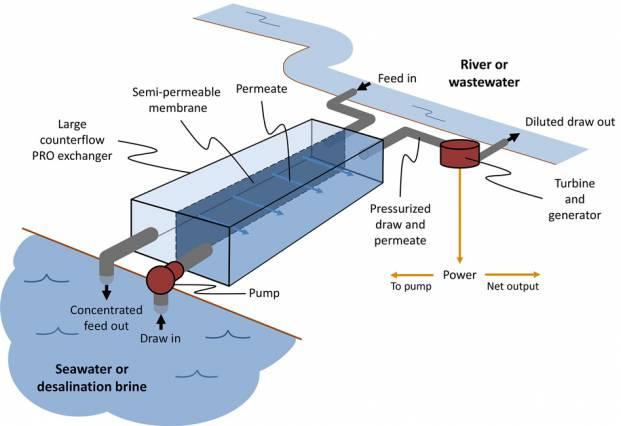 In this simplified PRO system, permeate from a dilute feed stream enters a concentrated draw stream in a pressurized state via osmosis — after which useful power can be extracted from the draw-permeate mixture. Image: Leonardo Banchik

Based on his calculations, Banchik says that a PRO system could potentially power a coastal wastewater-treatment plant by taking in seawater and combining it with treated wastewater to produce renewable energy.

“Here in Boston Harbor, at the Deer Island Waste Water Treatment Plant, where wastewater meets the sea … PRO could theoretically supply all of the power required for treatment,” Banchik says.

He and John Lienhard, the Abdul Latif Jameel Professor of Water and Food at MIT, along with Mostafa Sharqawy of King Fahd University of Petroleum and Minerals in Saudi Arabia, report their results in the Journal of Membrane Science.

The team based its model on a simplified PRO system in which a large semi-permeable membrane divides a long rectangular tank. One side of the tank takes in pressurized salty seawater, while the other side takes in river water or wastewater. Through osmosis, the membrane lets through water, but not salt. As a result, freshwater is drawn through the membrane to balance the saltier side.

“Nature wants to find an equilibrium between these two streams,” Banchik explains.

As the freshwater enters the saltier side, it becomes pressurized while increasing the flow rate of the stream on the salty side of the membrane. This pressurized mixture exits the tank, and a turbine recovers energy from this flow.

Banchik says that while others have modeled the power potential of PRO systems, these models are mostly valid for laboratory-scale systems that incorporate “coupon-sized” membranes. Such models assume that the salinity and flow of incoming streams is constant along a membrane. Given such stable conditions, these models predict a linear relationship: the bigger the membrane, the more power generated.

But in flowing through a system as large as a power plant, Banchik says, the streams’ salinity and flux will naturally change. To account for this variability, he and his colleagues developed a model based on an analogy with heat exchangers.

“Just as the radiator in your car exchanges heat between the air and a coolant, this system exchanges mass, or water, across a membrane,” Banchik says. “There’s a method in literature used for sizing heat exchangers, and we borrowed from that idea.”

The researchers came up with a model with which they could analyze a wide range of values for membrane size, permeability, and flow rate. With this model, they observed a nonlinear relationship between power and membrane size for large systems. Instead, as the area of a membrane increases, the power generated increases to a point, after which it gradually levels off. While a system may be able to produce the maximum amount of power at a certain membrane size, it could also produce 95 percent of the power with a membrane half as large. 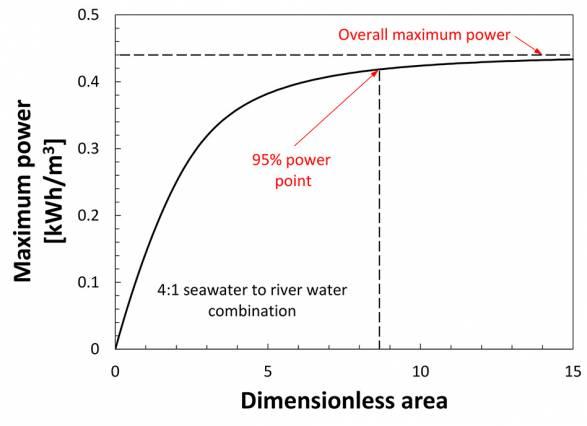 Still, if PRO systems were to supply power to Boston’s Deer Island treatment plant, the size of a plant’s membrane would be substantial — at least 2.5 million square meters, which Banchik notes is the membrane area of the largest operating reverse osmosis plant in the world.

“Even though this seems like a lot, clever people are figuring out how to pack a lot of membrane into a small volume,” Banchik says. “For example, some configurations are spiral-wound, with flat sheets rolled up like paper towels around a central tube. It’s still an active area of research to figure out what the modules would look like.”

“Say we’re in a place that could really use desalinated water, like California, which is going through a terrible drought,” Banchik adds. “They’re building a desalination plant that would sit right at the sea, which would take in seawater and give Californians water to drink. It would also produce a saltier brine, which you could mix with wastewater to produce power. More research needs to be done to see whether it can be economically viable, but the science is sound.”

This work was funded by the King Fahd University of Petroleum and Minerals through the Center for Clean Water and Clean Energy and by the National Science Foundation.