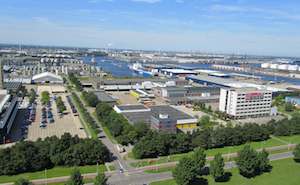 Amsterdam, The Netherlands – Change is coming to the Port of Amsterdam.

As the fourth busiest European port in cargo tonnage, the port is of substantial economic importance to Amsterdam and the Netherlands. More than 2,000 companies use the port and generate €6 billion in revenue per year. Companies in the port area employ 55,000 people.

According to its Vision 2030 statement, the port seeks to become “an innovative hub for [an] energy transition [and a] circular and bio-based economy” that will create jobs, new products, and economic progress.

A bio-based economy primarily uses renewable biological materials―from fields, forests, and oceans―for producing food, energy, and industrial raw materials. One reason ports like Amsterdam are interested in nurturing a “bioeconomy” is because biomass means business for the port. It’s a bulky raw material, and the port already has terminals that handle it. Ultimately, the port expects to replace current fossil fuel cargo with biomass.

The circular economy differs from a recycling economy. The former plans its production intentionally to avoid waste. The latter often creates waste as an integral part of its production process in the hope that a portion of it may eventually be recycled. Both economic models depend on economies of scale, and the port helps companies concentrate large volumes of raw materials.

The Port of Amsterdam increasingly sees itself as a matchmaker capable of bringing together companies active in the bio-based economy. It currently leases space to Orgaworld, a biodiesel fuel producer, and to two other bioplastics companies: Plantics and Avantium. In the future, the port might even be interested in developing a project of its own, such as a biomass power plant.

To nurture still more new green technology companies, the port has just opened a new incubator known as Prodock that provides start-up companies in energy, biomaterials, and the circular economy with space to operate pilot plants.

As a facilitator of green development, the port is working with the city’s local waste incinerator, water company, and sewage company to produce renewable energy in the form of biogas. All the firms are sited within the port’s boundaries.

Tweet this: The Port of Amsterdam sees itself as a matchmaker, bringing together companies in the bio-based economy.

The Amsterdam Waste Incineration Plant currently cogenerates heat and power from the city’s municipal refuse. The power is fed into the grid, and the heat is used for district heating.

Meanwhile, private companies have installed 65 MW of wind power in the port area, making it one of the largest onshore wind power parks in the Netherlands. The port is hoping to reach 100 MW of capacity in the next two to three years.

“The world around us is changing. We can’t wait until companies in the port area change. Sometimes you have to take the lead,” Egbertsen said.

So the port is trying to do its share to reduce its carbon footprint and usher in a greener and more sustainable economy. It is reducing its CO2 emissions, reusing materials, generating and cogenerating clean energy, and implementing a bio-based, circular economy. The port today functions as an incubator, funder, innovator, R&D facility, and business partner for sustainable enterprises—in short, as a catalyst for green development.

Strong Support in Amsterdam for City’s Climate and Sustainability Efforts