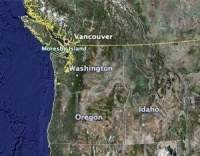 Vancouver, BC [RenewableEnergyWorld.com] Good weather and an appetite for sustainability appear to be the main factors driving the formation of a world-class “clean energy cluster” in the Pacific Northwest. Skilled workers with strong creative talent are attracted to the area, and it’s no coincidence that a range of renewable energy firms are setting up shop here as a result.

One of the important enablers in carrying out the plans and dreams of increased renewable energy transmission is the Pacific Northwest Economic Region (PNWER) organization. Comprised of states and territories on each side of the Canada/U.S. border, PNWER (Washington, Oregon, Montana, Idaho, British Columbia, Alberta, the Yukon and Alaska) is working to develop integrated economic and resource planning in a number of areas, including renewable energy. It helps address important questions such as interconnection, permitting standards, cross-border trade and human resources. Currently under development is the Energy Horizon project, an online portal to coordinate information and resource development between members.

Jeff Morris, a principal developer of Energy Horizon says, “The main goal is to gain a clear view of the whole region’s energy future, fifteen to twenty years forward, to anticipate and address challenges before they occur.”

For example, he adds, over 30 applications for wave or tidal power plants now exist in the Pacific Northwest region, but currently no utility has factored in additional power from these sources in their projections. The Energy Horizon project would help create baselines for this sector, in terms of costs, marine environmental standards, and power deliverables. Important issues such as the region’s different renewable portfolio standards and their required additions in transmission capacity are also being tackled.

The “green triangle” of Vancouver BC, Seattle, Washington and Portland, Oregon is creating fertile ground for sustainable technology developers. Mantra Ventures Group, Sea Breeze Power and Day4 Energy are three examples of companies that have chosen to base themselves in the Vancouver BC area, while building relationships in the Northwest states.

Mantra Energy, a cleantech venture capital firm, currently has offices in both Vancouver and Seattle. Day4 Energy, a PV panel manufacturer, has plans to greatly expand its production capacity in the nearby city of Burnaby by December 2008. The new Portland Habilitation Center was actually designed around the use of more than 4,800 Day4 panels on its roof. Sea Breeze Power, an active PNWER member company, is currently researching and writing reference material on best practices in renewable energy to help standardize developments across member jurisdictions. They are also working on a plan to build transmission capacity between Vancouver Island and Port Angeles.

“PNWER is a true cross-border organization made up of two provinces, five states, and one territory,” says Matt Morrison, PNWER Executive Director. “In July, Vancouver BC will be host to PNWER’s annual Summit, and there will be a strong focus on clean power technologies and cross-border trade in renewable energy,” he added.

The Energy Horizon website is scheduled to be completely up to date by or before this event.