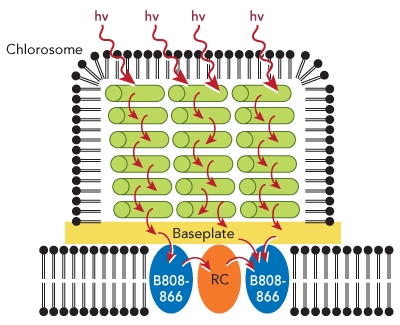 Many of our most important solar technologies are a direct outgrowth of the computer revolution.

Solar panels can be made with technology derived from computer chip production. Thin film also uses semiconductor principles, layering atoms on substrate to produce what amounts to a circuit.

But there has always been another way forward. Copying plants. Plants start the carbon cycle by using the Sun to power their everyday lives. It’s those lives we burn away when we use any type of fossil fuel – current lives (wood), or older lives (coal, gas, oil).

We cavemen who call ourselves civilized went through 10,000 years, rising from villages to globe-girdling urban environments, based entirely on burning dead plants.

Recently researchers with the Oak Ridge National Lab and Washington University in St. Louis used small-angle neutron scattering to analyze the structure of chlorosomes, plant structures that are efficient at collecting sunlight for conversion to energy, even in low-light and extreme environments.

Small-angle neutron scattering let the team clearly observe the complicated biological systems at a nanoscale level without damaging the samples. The aim was to tease out general principles for capturing, harvesting and transporting light efficiently in nature.

This has enormous implications for the industry. We’ve been growing for years, based on an assumption that a series of breakthroughs like those in computer technology will eventually let us eliminate the subsidies which make harvested energy competitive with caveman energy.

But what if this is a mini-computer approach, the same brute force effort used by a host of companies during the 1970s  and into the 1980s to gradually speed business processing, until the breakthrough of microprocessor-based PCs overtook them?

And what if plants are the microprocessors?

Silicon efficiency isn’t improving fast. Neither is that thin film, on a base level. There are improvements in materials, in costs, that keep driving the price per kwh of solar down slowly, arithmetically. Most in the industry believe that, in time, we’ll get where we need to go this way.

Yet there is always the chance that the plants know best. If that turns out to be true, everything we’re doing now will seem like a wrong turn in retrospect, through the lens of our children’s history books

I suppose when some in the industry consider that they gnash their teeth.

Me? I just smile. Because I’ve seen this movie before.

And it ends well.