Natural gas can be used to generate electricity, to supply heat or as a transportation fuel. With the discovery of methods to obtain it from previously inaccessible shale deposits, it has become domestically abundant. And, because burning it creates roughly half the greenhouse gas emissions (GhGs) as burning coal and significantly fewer than burning oil, transitioning to it could mean replacing both the financial black hole of oil imports and the environmental degradations of coal mining with an energy source that would double the time the nation has to cope with the onslaught of global climate change.

In The Future Of Natural Gas; An Interdisciplinary MIT Study (Interim Report), scientists who previously studied the practicality of “clean” coal and “safe” nuclear as means to face the coming “carbon-constrained” world say that in the next forty years (to the middle of this century) natural gas may be the best choice there is and a “bridge” to a New Energy economy. This suggests three possibilities.

First, they may be right about the idea of using natural gas as a bridge. Or they may be underestimating what the New Energies are capable of right now. Or they may know what the New Energies are capable of but are choosing the inevitability of natural gas because they anticipated what the U.S. Senate is flagrantly displaying this week for all the world to see: U.S. fossil foolishness will only die hard, no matter how bad it is for the people of this great nation and this good earth. ::continue:: 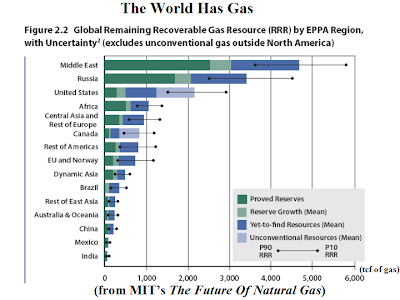 (1) The new-found abundance of international natural gas supplies will drive much more extensive use, especially in electricity generation.

(2) The U.S. shale gas reserves will drive increased domestic use.

(3) The increasing pressure to reduce GhGs will force a longer-term reduction of naturl gas reliance unless the capture and sequestration of fossil fuel emissions miraculously becomes both technically feasible and price-competitive with the ever-renewable, emissions-free wind, solar, geothermal and hydrokinetic energies.

(4) The domestic and international natural gas markets are so volatile that things could change before this sentence ends.

One of the biggest reasons there is so much talk about natural gas as the bridge to a New Energy future is that the present New Energy supply and infrastructure is inadequate to take over from coal. This is quite ironic. If the nation had not dallied with the volatilities of natural gas and sharply cut back on the research, development and deployment of New Energy in the 1980s, it might now be ready to throw off its fossil foolhardiness for good.

Yet here are the big brains at MIT urging the nation to make a similar mistake yet again by turning to natural gas. It’s formulation is nuanced: Technological advance (of New Energy and Energy Efficiency, “safe” nuclear and “clean” coal) should not be crowded out while natural gas rises in demand but development of natural gas, especially the shale reserves, should not be impeded by over-investment in technological advance before the technologies are mature.

If there weren’t this small matter of global climate change, it might be fine to leave all this to the so-called invisible hand of the marketplace, though the invisibility of the oil & gas industries’ phantom lobbyists is probably not what Adam Smith had in mind when he coined the construction. Given the urgency of an all too rapidly rising global average temperature, it is patently obvious that all barriers to the development and implementation of New Energy and Energy Efficiency must be eliminated.

One of those barriers is wasting time on developing any Old Energy infrastructure. That includes the cleaner fossil fuel (and “clean” coal and “safe” nuclear). When there is enough solar energy in the Southwest and enough wind off the Atlantic coast to power the Eastern Seaboard, what is the point of building natural gas pipelines?

The use of compressed natural gas (CNG) as a heavy transport fuel may be the exception that proves the rule. Limiting its use to buses and trucks minimizes the need for a delivery infrastructure and maximizes its effectiveness as a replacement for oil. Especially as subsidized in the “no-energy” bill currently being considered by the Senate, there is merit in this limited application of the resource. 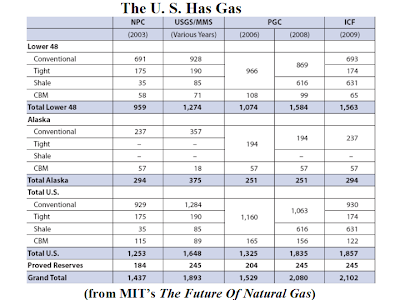 This post is based on The Future of Natural Gas: An Interdisciplinary MIT Study (June 25, 2010, Massachusetts Institute of Technology)