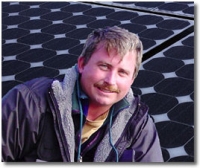 Traditional sources of electrical power generation will not last forever and will pollute our atmosphere. From our perspective, the world’s energy needs vary greatly; there is no clear single solution to the problem of supplying the world’s energy.

The Future of Solar Photovoltaic Energy 1. The Problem 2. The Solution 3. The Results 4. The Benefits 5 An Investment in the Future 1. The Problem: All forms of energy production have issues associated with them, for example: 1. Coal: Pollution/Strip Mining 2. Natural Gas: Cost and Lack of Infrastructure 3. Oil: Typically not Utilized to Generate Electricity 4. Hydro: Limited Availability/Environmental Concerns 5. Wind: Limited site and resource availability 6. Solar PV: Higher Cost 7. Others: (Fuel Cells, etc.) Maturity of Technology/Cost 2. The Solution: Solar photovoltaic (PV) systems effectively deliver three to five hours of peak power per day at roughly 10 Watts per square foot. Not one square inch of new land would be required to site PV. Theoretically, there are adequate residential, commercial, Government rooftops, and parking structures in California to power a substantial percentage of our State’s electrical needs from solar. In Southern California, solar produces a net energy gain in approximately three years. This means that within three years, PV systems begin producing more energy than the energy spent in producing the system and its raw materials. Best of all, the energy produced cost zero emissions. At today’s prices, a typical solar system costs approximately $8.00/watt, installed and has an operating life in excess of 25 years. For all intents and purposes, maintenance and operating costs are minimal. 3. The Results: Solar energy increases the diversity of power and adds stability to a fossil fuel favored energy structure, while reducing greenhouse gas emissions. 4. The Benefits: – Solar can be quickly deployed at the point of use, reducing the need for additional transmission and distribution infrastructure, and cost thereof. – Solar operates most efficiently at mid day, when grid demand is at its peak. By decreasing the strain during peak hours, the longevity of existing power plants and infrastructure is extended, lowering further the cost of energy production. – By deploying solar over time the cumulative effect of the installed base is impressive. Given its 25-year life, within 20 to 30 years, a respectable portion of California’s energy could be supplied by solar. – Once installed, the cost is fixed. In comparison to traditional sources of energy, the fuel cost is nonexistent, and operational costs are limited. A solar system’s cost is amortized over its life, there are no rate hikes due to fuel or operating cost increases. 5. An Investment in the Future: There are some negatives. Presently, solar costs more than traditional energy generation. Its efficient use is limited to daylight hours unless storage is employed. Admittedly, the solar industry today is not large enough to address all of our needs. The solar industry does not have the financial influence to compete with existing utilities, which typically oppose PV, within political circles. (Industry revenues globally represent only three billion a year). Globally, the industry has experienced an annual growth rate in excess of 18 percent in over a decade. This rate of growth is equivalent to that of semiconductor, telecommunications and computer industries. Clearly, there is no easy solution to Californiaýs energy problem. No doubt, a variety of technologies and tools are needed to ensure California’s energy independence and security. The Solar Industry Needs Your Support! For those interested in promoting a clean, safe and environmentally friendly source of energy, we urge you to write your representatives in the State and Federal Government. Make it clear you vote for representatives who support current legislation aimed at advancing the deployment of solar energy, such as the net metering law which allows the solar producer to bank excess energy production during the day, for use during the evening hours, basically feeding surplus power onto the grid, causing the meter to spin backward, lowering the electric bill. Tax credits and deployment subsidies provide the revenues necessary to support research and development of more efficient solar systems. Remember, in the 1970’s the State of California enacted emission standards that surpassed the rest of the nation. The argument against these standards was the cost of such improvements. Almost 30 years later, the impact is in the air and reflected in the increased fuel economy of the vehicles we drive. Solar energy is part of the solution and is a key to America’s long-term energy supply. After all, fossil fuels have a long history of issues with respect to stability of supply and cost. About the Author: Graham Owen, Principal, GO Solar Company, North Hollywood, California. The company was started in 1986 to provide service, maintenance and repairs of existing solar energy systems. They now provide installations of both solar thermal and solar photovoltaic systems.