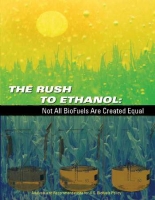 The corn ethanol refinery industry is the beneficiary of new renewable fuel targets in the proposed energy legislation as well as proposed loan guarantee subsidies in the 2007 Farm Bill. However, a new report released this week states that corn ethanol will not significantly offset U.S. fossil fuel consumption without unacceptable environmental and economic consequences.

The report, The Rush to Ethanol: Not all BioFuels are Equal, released by Food & Water Watch, the Network for New Energy Choices, and the Vermont Law School Institute for Energy and the Environment, reviews the literature on the environmental and economic implications of pinning our hopes on corn ethanol to reduce dependency on fossil fuels. The groups also made recommendations on U.S. biofuels policy including proposed reforms to ethanol provisions of the 2007 Farm Bill.

“Rural communities won’t benefit from the Farm Bill becoming a fuel bill,” said Wenonah Hauter, Food & Water Watch Executive Director. “In the long run, family farmers and the environment will be losers, while agribusiness, whose political contributions are fueling the ethanol frenzy, will become the winners.”

Rising oil prices, energy security, and global warming concerns have all contributed to the current hype over biofuels. With both prices and demand for oil likely to continue to increase, biofuels are being presented as the way to curb greenhouse gas emissions and to develop homegrown energy that reduces our dependency on foreign oil.

In this context, corn-based ethanol has emerged as a leading contender to reduce dependence on fossil fuel based gasoline. At first glance, corn-based ethanol seems simple, even patriotic: take the sugar from corn that U.S. farmers grow, and ferment it with yeast to distill basically the same stuff found in alcoholic beverages. Byproducts, such as distiller’s grain and corn gluten, serve as livestock feed and help offset refining costs. The industry claims that ethanol blends will lower tailpipe emissions, promote energy independence, and revitalize rural America. Farmers and investors envision a new gold rush. Ethanol production is registering record growth rates, and reached nearly five billion gallons in 2006. Dozens of new ethanol refineries are being constructed, with production capacity forecast to double as early as 2008. President Bush intensified this momentum in his 2007 State of the Union address with a call to produce 35 billion gallons of alternative fuels by 2017 – a fivefold increase from the currently established goals.

However, the leading raw material for ethanol in the United States-corn — is among the least efficient, most polluting, and overall least sustainable biofuel feedstocks. This report reviews the most up-to-date scientific evidence and concludes that corn-based ethanol is not the silver bullet everyone is seeking.

Ethanol is not the way to energy independence. The ability of corn-based ethanol to reduce U.S. dependence on foreign oil is limited. Dedicating the entire U.S. corn crop to ethanol would displace only a small share of gasoline demand.

Although the rise in corn prices excites farmers, the ethanol industry’s growth could further concentrate agribusiness, which drains the economic health of rural communities. Corn — now used to produce 95 percent of U.S. ethanol — is the least sustainable biofuel feedstock of all the raw materials commonly used. Intensive corn monoculture (where one crop is continually planted for at least three years in a row) is plagued by serious environmental effects that the ethanol boom exacerbates… Given the limitations and negative impacts of corn-based ethanol, policy makers, investors, and researchers are focusing now on the second generation of biofuels- cellulosic ethanol, which comes from feedstocks like switchgrass, fast-growing trees, and agricultural residues. These cellulosic “energy crops” are superior to corn-based ethanol…

Ethanol is not the silver bullet that will solve the problems of rising oil prices, dependency on foreign oil, or greenhouse gas emissions. Biofuels, if produced sustainably, should instead be considered in the context of a comprehensive transportation model transformation based on energy efficiency and conservation, and focused on reducing fuel demand.