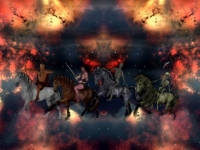 In years gone by, it was not too hard to write up a summary of Gevo, Solazyme and Amyris — all aimed at fuels, all in the development stage, all used synthetic biology in closed fermenters, all had big backers ranging from brand-name equity partners to big-time strategics, all went public in the same 2010-11 IPO window.

But we need not look only at the complications, friend. All you have to do is locate and measure the four horsemen of the financials — the items that are critical for industrial biotechnology at scale.

As Grantland Rice was moved to observe, you might know the Four Horsemen by aliases. In industrial biotech, you might have heard them described as Revenues, Strength, Capacity and Mix. But they are the Pale Horse, the Black Horse, the Red Horse and the White Horse.

They deliver the company from the high-value, small-market products at the top end of the price curve to the lower-value, high-volume products (where fuels reside, for example). So, the Q3 results are in and what have we learned?

Like the pale horse, these should be strong and transparent.

Total revenue for the third quarter ended September 30, 2013 was $10.6 million compared with $8.6 million in the third quarter of 2012, an increase of 24%. Revenues in the third quarter of 2013 included $4.8 million of product sales compared to $3.8 million in the same period of 2012, an increase of 27%. Going forward, Piper Jaffray’s Mike Ritzenthaler cautions: “First, that the 2014 milestones are far less granular and under control than those in 2013, and that the company will not disclose many supply agreements – obfuscating investors’ ability to gauge firm underlying demand for tailored oils.”

Digest note:  Biofene sales are gaining traction — it all depends on production capacity and cost.

Revenues for the third quarter of 2013 were $1.1 million compared to $0.6 million in the same period in 2012. They included proceeds from sales of biobased jet fuel to the U.S. Air Force (USAF) of $0.4 million, revenue under Gevo’s agreement with The Coca-Cola Company, and revenue from ongoing research agreements.

Like the black horse, these should be robustly positive and utterly fearsome.

Third quarter GAAP net loss attributable to Solazyme, Inc. common stockholders was $30.7 million, which compares with net loss of $22.5 million in the prior year period. Cowen & Company’s Rob Stone and James Medvedeff: add: “2013 guidance lowered, now targeting to be cash flow positive in 2015. SZYM lowered its FY:13 revenue guidance. As such, SZYM expects FY:2013 revenue of $40-$42M and expects to be cash flow positive in 2015.  Piper Jaffray’s Mike Ritzenthaler strikes a cautious note in warning: “With Bunge exploring alternatives for its Brazilian sugar business, we question whether a new owner would find much novelty in the Solazyme project – we believe investors should account for this risk.”

Digest note: has the partners and the balance sheet to manage growth. But watch Bunge.

Rob Stone and James Medvedeff of Cowen & Company note: “AMRS targets $4.00 per liter cash cost by year-end, about breakeven on the lowest ASP products in the portfolio. Jet fuel is making progress, and work continues on drilling fluids, but time to volume use is not certain.” GAAP net loss for Q3 was $24.2 million compared to a loss of $20.3 million for Q3 2012. Cost of products sold increased to $8.3 million for the three months ended September 30, 2013 from $4.4 million for the same period in the prior year. “Achieved lowest quarterly cash operating expenses since our Initial Public Offering in 2010… Following quarter-end, closed initial tranche of convertible note financing for $42.6 million.”

Digest note: Has the partners and they believe; but will costs come down and capacity expand fast enough?

The net loss for Q3 was $15.9 million compared to $12.1 million for the Q3 2012. Baird’s Ben Kallo writes: “Capital raise will be needed in the near term. GEVO ended Q3:13 with ~$25.7M in cash, and we believe GEVO has enough liquidity to operate into Q1:14. We believe continued progress at Luverne and/or increased interest in the licensing of GEVO’s GIFT technology could help the company to receive funding from a strategic investor or return to capital markets..

Funding used in the development of the bio-para-xylene facility was received from Toray Industries, Inc. under a definitive agreement previously announced in 2012. Speaking of partners, in August Gevo announced the opening of its biorefinery for fully renewable paraxylene at South Hampton Resources in partnership with Coca-Cola and Toray Industries. Toray has provided capital for the construction of the Silsbee facility and has signed an offtake agreement for paraxylene produced at that facility.

Digest note: Expect a capital raise soon. The model for paraxylene is locked in and a winner, if the technology comes through.

The Red Horse: Production capacity and timeline to scale

Like the Red Horse, these must be as urgent and swift as fire trucks racing towards a rescue.

If ever there was an argument for the supremacy of the Red Horse, it’s this: after announcing a 3-month slip at the Moema plant — and keeping in mind, leading energy analysts like Raymond James’ Pavel Molchanov had long-modeled such a slip — the stock was hammered 15 percent in today’s trading.

Solazyme CEO Jonathan Wolfson notes: “The facility in Iowa is already supplying market development samples to customers. Construction at the Brazil facility is in its final phases at over 90% complete and commissioning is underway…our timeline for oil production at Moema has been moved into 1Q14, in part to accommodate additional enhancements we are making at the facility. Stone and Medvedeff at Cowen & Co add “Two different tailored oils have been produced at 500K liter scale and a third is planned before year-end at the Clinton plant.”

Raymond James SVP Pavel Molchanov writes: “Solazyme is set to reach commercial-scale production in the U.S. and Brazil in 1Q14 – unquestionably the first player in the algae arena to claim such a feat, although it is a quarter later than management had previously targeted. It’s a minor pushout in the grand scheme of things…The trajectory of the ramp-up will certainly be back-end-loaded: while this is not much more than a guesstimate on our part at this point, we anticipate utilization of 8% in 1Q14, rising to 50% in 4Q14.

Digest note: It’s a delay at Moema, but if it is three months and if Clinton proceeds to accelerate, it will hardly matter in the long run. But this scale-up step — from a development-stage company to heavy production at scale – it’s the big one now. Risks abound – we’ll see in the next 12 months how Solazyme has prepared for the bumps in the road.

The company notes that it “operated with all six fermentors during the entire quarter at the Company’s farnesene production facility in Brotas, Sao Paulo, Brazil. The Motley Fool’s Maxx Chatsko adds: “Management expects total farnesene production for 2013 to come in at more than 4 million liters.

Rob Stone and James Medvedeff of Cowen & Company noted: “In addition to squalane, niche diesel, and farnesene for base oils, shipments may commence for other categories such as flavor and fragrance, and polymers and plastics. However, Brotas is likely to take 2-3 years to fully ramp to 40MM liter annual capacity.”

Digest note: It’s a long way to Tipperary — or, rather, the tipping point of full-scale operations at Brotas. That, perhaps more than anything, represents the discount on the valuation of Amyris compared to the underlying value of its disruptive technology. It’s a long walk to freedom, as Mandela noted.

Last month, Gevo signed its first letter of intent to commercially license its GIFT technology to IGPC Ethanol. IGPC is a farmer owned co-op that owns a 150 million liter plant in Ontario, Canada and has been producing ethanol since 2008. IGPC is interested in licensing Gevo’s GIFT technology to incorporate isobutanol production at its ethanol facility.

Digest note: Customers are there, and more coming. It all comes down to the production cost — can Gevo deliver? If so, it’s a massively undervalued stock.

Like the White Horse, these should be as dazzling as the new-drifted snow and a blend of all the colors of the rainbow.

Solazyme CEO Jonathan Wolfson notes: “Our commercial progress has accelerated with the recent announcement of two supply agreements…and advance the commercialization of our food ingredients out of our Peoria facility. This week we launched a completely new skin-care brand and product line, EverDeep, our second brand along with Algenist.”

Yep, there are supply agreements with Unilever in the  (initial) 10,000 MT range, scheduled for 2014. And one with Goulston Technologies in the textile lubricants market. In addition, Solazyme and Bunge extended and expanded their JDA to enable the Solazyme Bunge Renewable Oils JV to have access to a broader portfolio of oils.

Digest note: Early days on delivering full offtake for Moema — but the momentum is there with big brands. Can Moema open on time, produce as expected, and will the customers line up at the right time.  It’s all about Moementum, isn’t it?

Rob Stone and James Medvedeff of Cowen & Company note: “In addition to squalane, niche diesel, and farnesene for base oils, shipments may commence for other categories such as flavor and fragrance, and polymers and plastics.

However,  The Motley Fool’s Maxx Chatsko adds: “Successfully commercializing the first fragrance molecule with partner Firmenich early next year will pave the way for higher-value products, while additional oils and fragrances being developed with International Flavors & Fragrances hold even more promise for the company’s future…The average selling price per liter of farnesene dropped considerably, but that was expected as sales of lubricants with Cosan increased in the product mix. Previously, most of the company’s sales were the emollient squalane — the highest-value product made from farnesene — to the cosmetic industry, as well as renewable diesel — one of the lower-value products offered — to various Brazilian transportation authorities.

Digest note: Very nice broadening of the customer mix — which should broaden still further as the costs come down and Amyris can start reeling in margins on bigger-market products. But how big, how soon?

In September, Gevo signed a supply agreement with the U.S. Navy to supply them with 20,000 gallons of Gevo’s renewable alcohol-to-jet-5 (ATJ-5) jet fuel and an option to increase the order to 90,000 gallons.

Gevo has previously supplied ATJ-8 jet fuel under its contracts with the U.S. Air Force for 56,000 gallons and the U.S. Army for 16,150 gallons. On July 24, 2013 Gevo announced that it had signed a supply agreement to supply the U.S. Coast Guard with up to 18,600 gallons of finished 16 percent renewable isobutanol-blended gasoline.

Digest note: For right now, it’s anchors aweigh as the company leans heavily on government contracts — look for the Sasol relationship to take up the slack as Luverne expands.