It’s kind of funny to listen to the so-called experts talk about the fight for energy and climate legislation reportedly coming to the Senate floor in July. Never have so many experts sounded so befuddled.

This is what is happening: Because of the Gulf oil spill, the situation has gone from dormant to dynamic. The death of Senator Byrd (D-WV) only adds uncertainty. The fate of any legislation is now unpredictable, so everybody – everybody left in the game, that is – is taking their best shot.

Besides measures to deal with offshore oil drilling – like increased liability requirements for drillers and reform of the Minerals Management Service (MMS) that oversees the drilling) – what will the legislation contain? Perhaps nothing else and perhaps much more.

Among the proposals, the Kerry-Lieberman (KL) American Power Act (APA), is probably the leading candidate at this fluid moment. The competing Bingaman American Clean Energy and Leadership Act (ACELA) avoids a crucial element in the KL bill and includes a key element missing in KL. A third piece of legislation, the Cantwell-Collins Carbon Limits and Energy for America’s Renewal Act (CLEAR), is undoubtedly the most interesting and least likely of the bills. Its chief virtues may be that it is brief and very different. The newest in the competition is Senator Lugar’s Practical Energy and Climate Plan (PECP), which capitalizes on the furor around the Gulf oil spill by calling for stronger vehicle fuel efficiency standards.

Analysis of the American Power Act, from the ClimateWorks Foundation, is the newest in what will surely be a long line of studies supporting each approach and rejecting the others. It follows on Assessing the American Power Act (see AN ECONOMIC LOOK AT THE SENATE ENERGY/CLIMATE BILL) in showing multiple benefits from KL. ::continue::

As documented by ClimateWorks, KL’s main thrusts are its cap on greenhouse gas emissions (GhGs) and its emphasis on funding and implementing Energy Efficiency (EE). 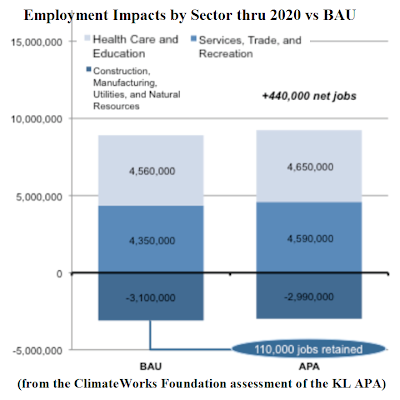 To the disappointment of the New Energy industries, KL has no Renewable Electricity Standard (RES) requiring all regulated U.S. utilities to obtain a specific portion of their power from New Energy sources by a specific year. The Bingaman ACELA does have an RES.

KL puts all its effort into getting a cap on GhGs – any cap, as a starter. It will be a major accomplishment. The premise for this KL goal was validated by Evaluating Renewable Portfolio Standards and Carbon Cap Scenarios, a recent study from the National Renewable Energy Laboratory (see THE BEST THINGS FOR THE BEST ENERGY-CLIMATE BILL). The study found a cap is likely to result in more New Energy and less coal use than an RES.

The problem is that a cap is the bane of conservatives. As demonstrated by the ACELA proposal by Senator Bingaman, which has no cap, conservatives reject the many studies showing a GhG cap will not significantly raise utility rates and they ignore the provisions in KL that return revenues to businesses and ratepayers most harmed by the impacts of a cap.

Conservatives have successfully labeled Cap&Trade as “cap-and-tax” and made it politically untenable. The Bingaman ACELA, which eschews Cap&Trade and includes the New Energy industries-favored RES, is the perfect anti-KL option. That is why Senators Cantwell and Collins are pushing Cap&Dividend 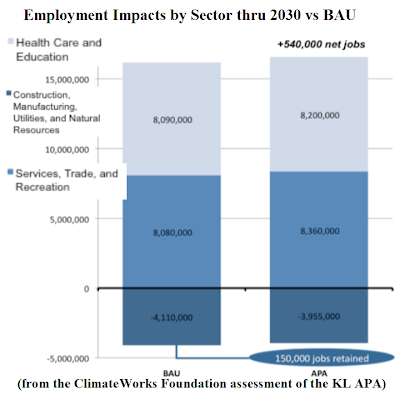 The Cantwell-Collins CLEAR Act Cap&Dividend proposal is a straightforward way to impose a cap using a simple framework. So far, it has avoided being labeled a tax because, instead of imposing IRS-like complexity, it directly rebates most of the revenues from its cap to citizens and allots the balance to the building of New Energy and Energy Efficiency infrastructure. (See CAP&DIVIDEND CLEAR-ED…)

The Lugar Practical Energy and Climate Plan (PECP) avoids the GhG-capping controversy and New Energy issues by centering almost entirely on Gulf oil spill-related measures and calling for stronger vehicle fuel efficiency standards. It is ideal for conservatives who want to give no significant ground and it could become part of something larger and more substantive as the floor fight proceeds.

Both the Peterson Institute and ClimateWorks studies, using substantive research and statistical analyses, insist KL, whatever its complexities, is not a “subversive tax.”

With revenues raised by capping GhGs and auctioning permits to very big emitters like power plants and heavy industries, ClimateWorks finds KL will drive the transition to a New Energy economy by motivating investment in and implementation of New Energy (NE) and Energy Efficiency (EE) on a significant scale.

The ClimateWorks study uses a variety of McKinsey economic modeling tools to conclude that such a transition to a New Energy economy will drive job gains across the manufacturing, construction, services, health, trade, and other sectors of the U.S. economy.

This post is based on Analysis of the American Power Act (June 15, 2010, ClimateWorks Foundation)