Bend, Oregon — On a crisp fall day in late-September, three white vans crept up a winding Oregon dirt road lined with thick forestry. The pitted, unwelcoming path made for a rough ride — a likely indicator that many don’t often brave the ride to the top of the crater. Midway through the journey, the lead van stopped beside a hunter readying to traverse the dense, uninhabited wood for prey. Little did he know that the woods were uninhabited for a reason. 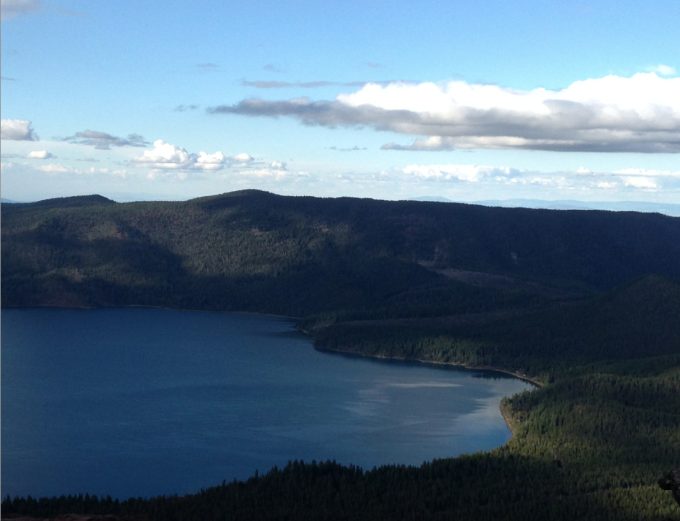 The Cascade Mountain region near the AltaRock Newberry EGS site in Oregon.

“I’m sorry, sir, but you’re going to have to hunt elsewhere. This is private land for the Newberry enhanced geothermal project. Unauthorized people are not allowed.”

As the hunter maneuvered his truck back down the crater, the atmosphere in the vans tingled with excitement. Finally, the famed enhanced geothermal system (EGS) research project that has been shrouded in mystery and rumor would be revealed to the 20 geologists, engineers and students attending the 2014 Geothermal Resources Council Annual Meeting and Geothermal Energy Association Expo in Portland, Oregon.

The Newberry site is protected for good reason: The 15-square-mile area is home to at least 2,000 megawatts of potential geothermal resource capacity, according to SMU Geothermal Lab founder David Blackwell. That’s a lot of hot rock waiting to be exploited if AltaRock’s EGS technology reaches fruition.

“That is why Newberry is so critical,” said Blackwell. “What happens there could affect the entire region, which has more than 5 GW of potential.”

Not only would the project affect Oregon, it would impact the geothermal industry worldwide. In the U.S. alone, there is more than 345,100 MW of potential EGS capacity, according to conservative estimates from the U.S. Geological Survey. In other words, it could realistically replace a significant amount of flexible, baseload fossil fuel sources.

“When the technology breakthrough comes, EGS potential could very well be many times more than human consumption,” said Pall Valdimarsson, manager of research and development of the geothermal competence center at Atlas Copco.

What makes EGS so different is that rather than traditional geothermal that drills into an existing reservoir, EGS involves drilling into dry hot rock and injecting fluid to create a reservoir.

AltaRock chose Newberry as its testing site for several reasons. Most importantly, the ground is very hot and has low permeability, so it will be fairly easy to stimulate a reservoir in order to take advantage of that heat. The site also had several abandoned drilled wells, which equated to significant savings. And its base of operations is fairly close to a city, Bend, for supplies and potential employees, but far enough away from the population so that they are not affected by sight or sound.

On the surface, it doesn’t look like much is going on at the Newberry site aside from some noisy generators, a couple large 800-ft-deep pools of water and an injection well — but that’s because all the real action is taking place underground. 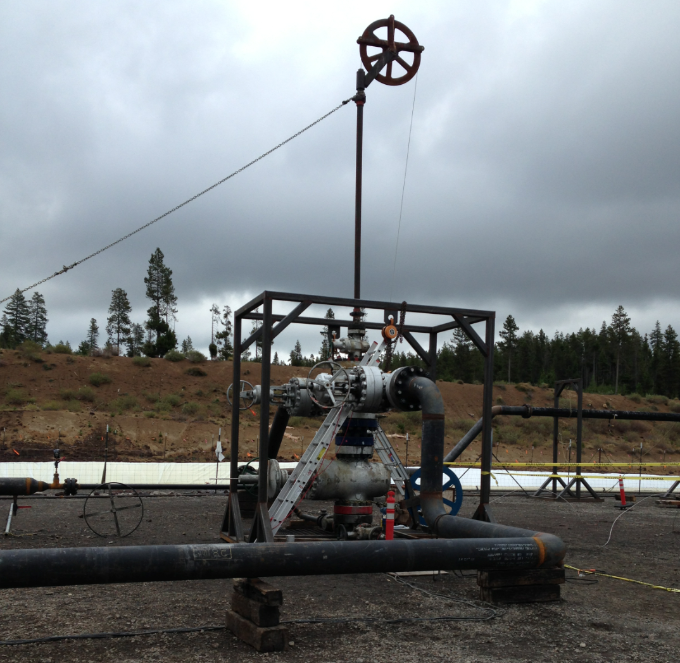 The injection well at the AltaRock Newberry EGS site.

AltaRock is working on a multi-zone stimulation process. Water from the pools is injected into the well at a pressure of about 2,000 psi to stimulate tiny millimeter-sized openings, or slips, in the rock, which eventually spider out to create a zone, according to Trenton Cladouhos, senior vice president of research and development at AltaRock. This is a much different process than fossil fuel fracking, which injects a slurry of water, chemicals and sand at much higher pressures of up to 10,000 psi to create large damaging breaks in the rock.

Once a zone is complete, pressure is dropped to about 1,000 psi and a diverter made of biodegradable plastic is injected into the well to temporarily fill the slips. Pressure is then increased again to 2,000 psi to start a new fracture zone, and then a new batch of diverter is made to plug up holes at hotter temperatures. 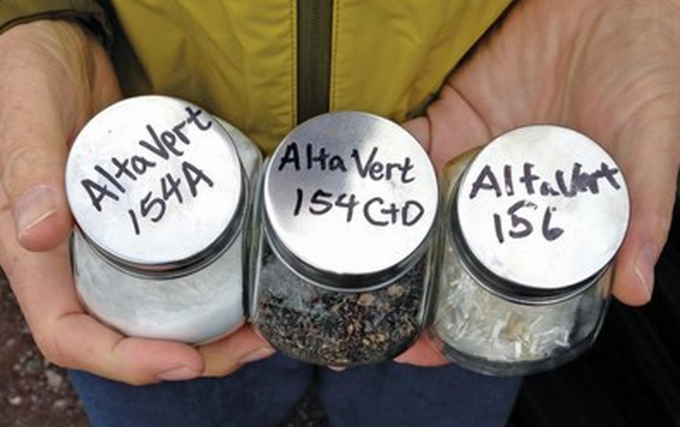 The process repeats until all zones are created, and water flow is then stopped to allow the well to heat up. It takes about one week for the diverter to break down into water and CO2.

Bump in the Road

The road to the injection well has been anything but smooth, said Cladouhos; in fact, it was delayed nearly two years. In 2012, the AltaRock team found that the casing on one of its inherited Davenport wells had cracked, leaking nearly 10 million gallons of water.

“The well had sat for nearly four years untouched, and it was not as strong as we had thought,” said Cladouhos. “A horizontal crack formed due to the pressure, which created a minor seismic event.” 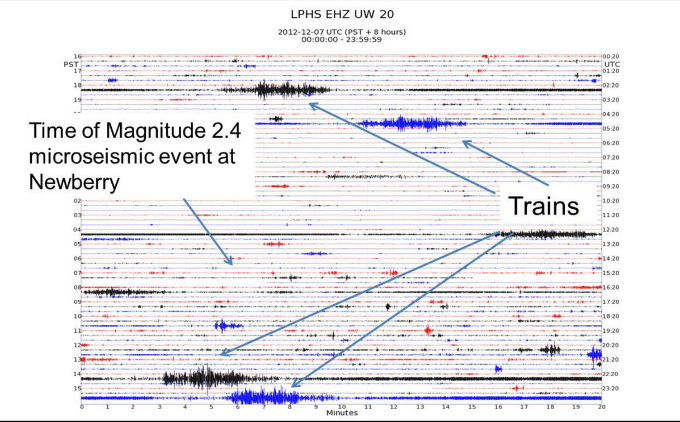 That event was the highest the project has even experienced at 2.4, which is “way below what you can feel,” said AltaRock communications director David Stowe. AltaRock has a strict seismicity protocol, which is closely observed by the U.S. Department of Energy.

During a 3.0 event, workers will turn the well pressure down and even stop operations. To monitor seismicity levels, AltaRock installed an advanced microseismic network system of about 20 seismometers that surround the project. Due to their sensitivity, some seismometers were placed underground in 800-ft wells with steel and cement casing — these pick up about 10 times less surface noise than above-ground seismometers. A cable runs from the underground technology to a solar- and battery-powered monitoring station near the borehole. Each seismometer station gathers information, which is then organized by fracture zone and displayed on a computer screen on the project site, said Cladouhos. 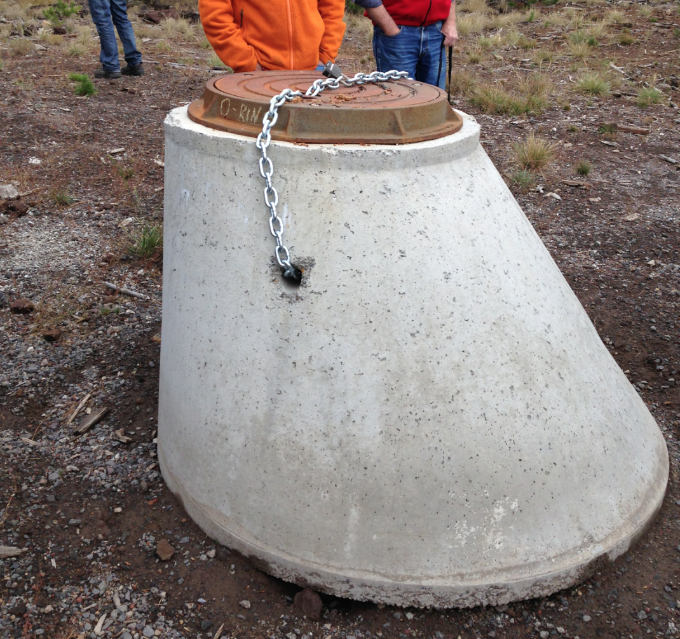 The site of an underground seismometer near the project site.

Once the injection well casing problem was identified and addressed, the AltaRock team installed a new steel-encased casing that is built to withstand higher pressures.

If all goes well in the coming weeks, AltaRock will continue this injection process until they reach about 6,000 to 10,000 feet, conduct flow testing and then close for the winter. In spring 2015, it will start drilling production wells.

“Enhanced geothermal systems are the big carrot,” said Valdimarsson. “Right now we can see the tree, but not the forest.”