It is no mere coincidence that Virginia Offshore Wind Studies, July 2007 to March 2010; Final Report begins with a discussion of power prices and the impact that putting a price on greenhouse gas emissions (GhGs) will have on power prices. The Virginia Coastal Energy Research Consortium (VCERC), which oversaw the long and authoritative study and produced the report, knows only too well what the rest of the nation is about to learn: The future of offshore wind energy depends on how much electricity costs ratepayers.

Right now, much of the price of fossil fuel-generated electricity is paid by taxpayers in the form of healthcare costs, transportation system costs and many other costs that are external to the price for electricity on ratepayers’ utility bills and are therefore called externalities.

Electricity generated from fossil fuels seems “cheap” in the same way that the price of vehicle gas refined from oil seems “cheap.” The “cheap” gas does not include the REAL costs carried by taxpayers for cleaning up messes the oil industry makes (like the current Gulf Coast oil spill) just as “cheap” electricity does not include REAL costs carried by communities and taxpayers for things like coal mine cave-ins and coal mining’s environmental devastation.

Those who understand the importance of shifting to a New Energy economy want to see such externalities become internal to the price of fossil fuels. Those who don’t want a New Energy economy describe the cost imposed by making externalities a part of the price of gas and electricity as a subversive tax. Actually, shifting REAL costs to the price at the pump and the price on the utility bill is a shift from one form of tax to another. Such a shift would more accurately price the cost of burning for transportation and spewing to generate electricity and thereby make the use of sun and wind and water power more equitable.

Virginia is uniquely positioned to both understand and be burdened by the falsely “cheap” price of fossil fuel-generated electricity. Its Atlantic winds are abundant. Yet the cost of reaping those winds is nowhere near competitive with the cheap coal-fired power its profligate citizens now consume unconcerned by consequences and unburdened by REAL costs. ::continue:: 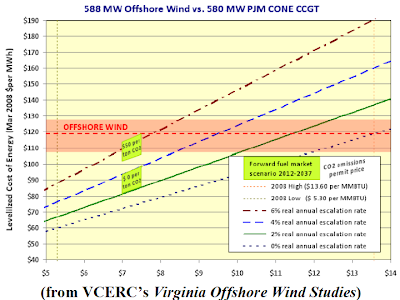 The VCERC paper runs the numbers and demonstrates that offshore wind is on its way to becoming cost competitive but will not likely be so before 2018. Shifting to the fossil fuel industries the costs for the pollutions they generate will hasten that parity. The responsibility can be imposed in the form of a price for GhGs or a requirement to install GhG-capturing equipment or any combination of those and other means.

The paper identifies 25 leasing sectors off Virginia’s coast with a 3,200-megawatt offshore wind potential that could be developed without creating any conflicts with other offshore activities (Naval, Aeronautic, recreational, fishing, shipping, oil and gas drilling, etc.) in the region. The offshore projects would be 12 miles offshore where they would raise no aesthetic objections.

Development of offshore wind can benefit Virginia in several ways. The high cost of offshore wind can be diminished if there is a domestic turbine manufacturing industry and supply chain. This offers economic opportunity especially appropriate to the shipbuilding industry along Virginia’s Hampton Roads Naval coast. Such an industry, designed to reap the fullest benefits of Virginia’s readily available offshore assets, could generate 9,700 to 11,600 jobs within 20 years, add an estimated $403 million to the local economy and cut electricity costs an estimated 1.5 cents per kilowatt hour.

An observation from VCERC on the environmental impacts of offshore wind: A utility (PJM) study found that 15,000 MW of wind capacity would displace 26,300 gigawatt-hours (GWh) of coal and 13,000 GWh of natual gas, cutting 34-to-37 million short tons of CO2 per year even without a price on emissions. This could lower electricity prices $4.50 to $6.00 per MWh. Assuming a yearly demand of ~789,000 GWh in 2013, this is customer savings of $3.55-to-$4.74 billion per year. More importantly, it saves innumerable shellfish and other ocean life by preventing more severe ocean acidification.

One final point: The paper points out that the affordability of offshore projects hinges on the use of economic best practices because the subsidies so effectively used in Europe to drive offshore wind’s growth are unlikely to be legislated into practice in Virginia. 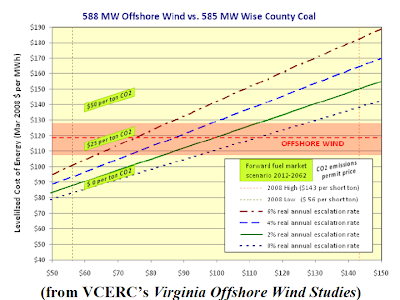 This post is based on Study outlines Virginia offshore energy prospects by Steve Szkotak (May 3, 2010, AP via Bloomberg BusinessWeek)