New Hampshire, U.S.A. — In June 2010, the Manomet Center for Conservation Sciences released the results of a study on burning woody biomass for energy in Massachusetts.

Since then, several critiques have appeared, including one recently published in the July/August 2011 issue of Renewable Energy World North America by William Strauss.

The study found that, initially, switching to the combustion of forest biomass to generate electricity or heat would produce more GHG emissions than burning fossil fuels to generate the same amount of energy. This is due to the low embedded energy of wood relative to fossil fuels – for the energy technologies we evaluated, wood releases more GHGs per unit of usable energy. However, as forests grow back, this carbon “debt” is reduced and eventually replaced with a carbon “dividend” (relative to fossil fuels). The length of time to pay off the debt can vary from a decade to a century, depending on an array of factors outlined in our study.

Our study has been controversial because it challenged the conventional wisdom that burning wood is instantaneously carbon neutral. Two arguments are generally made for carbon neutrality. First, there is the assumption that carbon is immediately sequestered somewhere else on the forested landscape. The second argument was made by Strauss in the previous issue of this magazine. In that article, Strauss claimed that Manomet’s debt-then-dividend model ignores growth of the forest before the biomass harvest takes place. Both arguments fail to acknowledge that what is important to climate policy is understanding the difference in future atmospheric GHG levels, with and without switching to woody biomass energy. Prior growth of the forest is irrelevant to the policy question, unless the forest was grown intentionally for the purpose of being used for biomass energy, and wouldn’t have been grown otherwise. That was not the case with the proposed Massachusetts biomass feedstock. 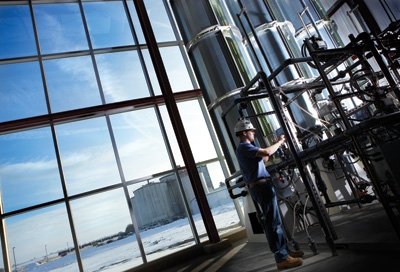 Forests are dynamic systems constantly emitting and absorbing CO2 as a result of natural and human factors. The emissions profile of a given forest can change over time and the decision to establish a new biomass energy facility will alter the emissions profile of a forest. That change is the point of interest in accounting for the impacts of a switch from fossil fuel energy to bioenergy. Contrary to what Strauss argued, the growth of the forest before the switch to biomass is the same in both scenarios and therefore is not relevant to determining future GHG emissions. Furthermore, our evaluation did account for sequestration occurring elsewhere on the landscape. In our Massachusetts study, this landscape-level sequestration was not sufficient to overcome the short-term carbon debt.

In our framework, there are four elements to calculating the GHG impacts of switching from fossil fuels to forest biomass energy:

Biomass feedstock source: Carbon dynamics of the feedstock source will vary depending upon whether live trees are being used or whether harvest residue (i.e., tree tops and limbs) is used. The carbon debt for using live trees takes much longer to “pay back.”

Form of energy generated: The lifecycle emissions per unit of energy for the biomass energy technology of concern must be known. For wood, combined heat and power generation has a shorter carbon debt period than electricity generation.

Our framework does not ignore the existence of the biogenic carbon cycle. We are simply reflecting the common sense insight that decreases in forest carbon stocks resulting from the harvest of biomass can result in a greater share of earth’s biogenic carbon ending up in the atmosphere instead of staying in the forest.

With respect to “what the atmosphere will see,” we maintain that we got the GHG accounting correct. It was a simple math problem, not a value statement about the many important attributes of managed forests.

In our study we drew no conclusions about whether biomass energy was right or wrong. In fact, different people can have legitimately different interpretations. For those who feel compelled to reduce GHG emissions urgently in the near term (e.g., next 10-20 years), switching to wood might not be desirable. For those who view climate change as a longer-term (20-100 years) problem, then switching to wood energy may be a good option. The study team did not make such a determination because that depends on one’s own assessment of climate change risk.

Manomet continues to invite careful scrutiny of our study. It is crucial that we thoroughly understand these topics in order to develop smart and sustainable energy and climate policy. The science needs to be accurate, especially when society must make difficult decisions.

It is also important to have civil and productive conversations that allow accurate science to become effective policy. Massachusetts set a goal for greenhouse gas emissions. Our study accurately explained the short and long-term GHG implications of switching to biomass energy in Massachusetts. One might argue about validity of the goal, but we believe we got the science right.

John Gunn is an ecologist and a Senior Program Leader at the Manomet Center for Conservation Sciences based in Brunswick, Maine.