A meteorologist, an oceanographer and a biologist go into a bar. “What’ll it be?” the bartender asks. “More severe weather events,” says the meteorologist. “More sea level rise,” says the oceanographer. “More extinctions and migrations,” says the biologist. The shaken bartender breaks into a nervous sweat. “Is it getting hot,” he exclaims, wiping his brow with a bar rag, “Or is it just me?” “It’s getting hot,” the scientists reply grimly in unison.

It’s not a joke. It’s a summary of the just released State of the Climate in 2009, a report assimilated by a meteorologist, an oceanographer and a biologist from the National Oceanic and Atmospheric Administration (NOAA). Based on the findings of more than 300 scientists from 48 countries and analyses of data drawn from 37 crucial climate indicators, the report says its getting hotter.

Of the report’s ten Essential Climate Variables (ECVs), all ten are consistent with a warming world. The seven that warming would cause to rise are rising: (1) air temperature over land, (2) sea-surface temperature, (3) air temperature over oceans, (4) sea level, (5) ocean heat, (6) humidity and (7) tropospheric temperature in the “active-weather” layer of the atmosphere closest to the Earth’s surface. The three that would be expected to decline with warming are: (1) Arctic sea ice, (2) glaciers and (3) spring snow cover in the Northern hemisphere. ::continue::

There are two key points to be drawn from this report. The first is that whatever politicians in the pay of vested interests may say, the climate is changing and global weirding – associated with a one degree Fahrenheit global average temperature rise – has already begun. There is simply no debating the point.

The last three decades have been the hottest in recorded history and each has been hotter than the one before. A contention of ignorant deniers that there was a cooling trend after 1998 is simply an unscientific “cherry-picking” of data. If last winter was particularly cold or this summer is particularly hot, it only confirms Mark Twain’s prescient observation that “Climate is what we expect; weather is what we get.”

Weather varies because of short-term natural phenomena like the El Niño/La Niña events. Climate is the product of grinding, long-term processes. The data leaves irrefutable the conclusion that the earth’s temperature has been rising in a centuries-long process. The data also shows that, on a planetary scale, the temperature rise since the advent of the industrial revolution has been too rapid to be explained only by natural causes. 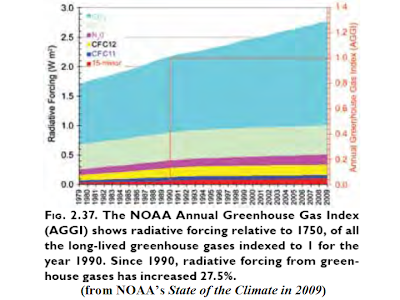 Example of weather versus climate: A warming climate will have cold spells but they will be localized and less frequent. In the 2009/10 winter, a warm air mass moved into Canada. It pushed cold air south. Canadians had a mild winter and other regions were unusually warm but the U.S. mid-Atlantic coast was extremely cold and snowy. The world as a whole had one of the warmest winters on record.

The second key point in the report answers an observation recently made to NewEnergyNews by a hard-working, rough talking Texas cattle rancher. Living close to the land, the rancher admitted he could not deny there is something unusual going on with this good earth’s climate. But, because most of what he knows is from his hard life, his church and the rural Texas media, he doubts that what is going on has anything to do with what humans are doing.

The rancher’s experience and data are limited. If he understood the greenhouse effect and had the time to read the new NOAA report, he would find ample data verifying the accumulation of greenhouse gases (GhGs) in a way that leaves little room for doubt. Concentrations in the upper atmosphere and the ocean are increasing at an ever-faster rate.

More importantly, the Texas rancher would find in the report that samples taken in the oceans and studied in detail show the carbon there is not the result of nature’s processes (like his cattle’s flatulence or plant decay) but was largely generated by human fossil fuel-burning (anthropogenic) activity. The samples also show the oceans’ GhG-absorbing and heat-absorbing abilities to protect the atmosphere is rapidly being exhausted.

Now if only the rancher would go into that bar and chat with the bartender and both of them would demand of their elected representatives that they stop doing obeisance to the vested interests and start acting on behalf of this good earth. 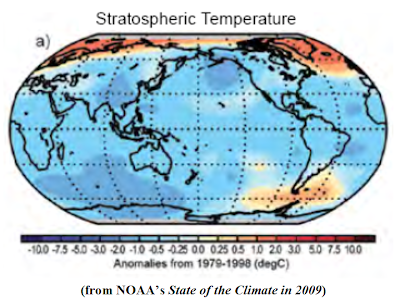 This post is based on NOAA: Past Decade Warmest on Record According to Scientists in 48 Countries; Earth has been growing warmer for more than fifty years (July 28, 2010, National Oceanic and Atmospheric Administration)