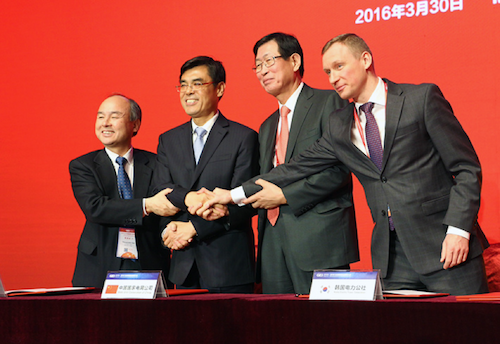 The triple-disaster of earthquake, tsunami and nuclear meltdown that hit the northeast of Japan in March 2011 was a wake-up call for many people. This was true for Masayoshi Son, a founder, chairman, and chief executive officer (CEO) of Softbank Group, a Japanese multinational telecommunications and internet corporation. Having experienced the danger of nuclear power plants in Fukushima, he felt the need to replace nuclear power with safer and cleaner renewable energy for a better future.

To accelerate the deployment of clean, safe, and affordable renewable energy, he founded the Renewable Energy Institute (REI), and in September 2011, the “Asia Super Grid (ASG)” was conceptualized. ASG goes beyond Japan and includes other Asia countries to further maximize the usage of renewable energy by taking advantage of diversity in loads and resources.

At an International Symposium this September to celebrate REI’s five-year Anniversary, Son happily announced that his “Vision of the ASG” was one step closer to materialization.

“When I announced my idea five years ago, many people said it is a crazy idea, and they also said that it is neither economically or politically feasible,” recalled Son. Despite these nay-sayers, he has been making steady progress. 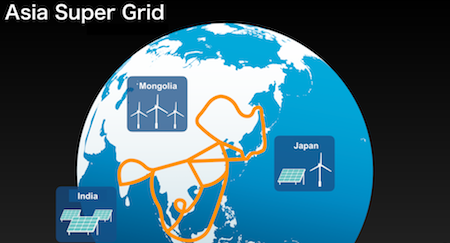 The first step was to develop electricity generation plants domestically by creating SB Energy Corp. as part of the SoftBank Group in 2011. The company is now established and operating 33 utility-scaled renewable power plants nationwide, including a 48-MW wind farm in Shimane prefecture and a 111-MW solar PV farm in Hokkaido prefecture.

The company also looked outside Japan for more abundant renewable energy sources. Mongolia has vast wind resources, and to harness the potential, the company formed Clean Energy Asia LLC with Newcom LLC, a Mongolian conglomerate. The joint company has secured a land-leasing right in the Gobi Desert for the next 100 years to develop and operate 7 GW worth of wind farms. The company also formed a joint venture company called SBG Cleantech Ltd in India, with India’s Bharti Enterprises Pvt. and Taiwan’s Foxconn Technology Group, to develop a 350 MW solar PV farm in the southern state of Andhra Pradesh.

“A miracle happened,” said Son. He met Liu Zhenya, a former chairman of State Grid Corporation of China (SGCC), and to his pleasant surprise, Zhenya had the same vision of connecting Asia with renewable energy.

Hwan-Eik Cho, president/CEO of Korea Electric Power Corp. (KEPCO), a South Korean public power company, also felt that the ultimate goal of KEPCO was to connect Asia with energy, conceptualized as Asia’s “Smart Energy Belt.” Cho believes that it is difficult, but with the current advancement in technologies, it is feasible.

This March, these three organizations, joined by Rosseti, a Russian electric power and grid operator, signed a memorandum of understanding (MOU) to conduct technical and economic feasibility studies toward creating the international transmission network in Northeast Asia.

Now with the MOU, wind energy generated in Mongolia could be transmitted to Japan, through China and South Korea via undersea transmission cables, and hydropower generated in Russia could be delivered to Japan and other nations. Son refers to these two energy transmission routes as the “Golden Ring” in Northeast Asia (See Figure 2). 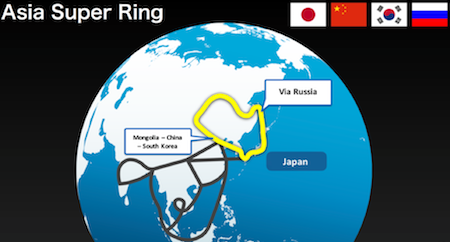 Asia represents about 2/3 of the total world population. Electricity generation by Japan, China, South Korea, and Russia represents 76 percent of Asia’s total generation, and similarly, electricity consumption by these four countries represents 77 percent of Asia’s total consumption. Simply put: Japan, China, South Korea, and Russia together represent a vast majority of electricity generation and consumption of the most populated region in the world. This can be interpreted as, if joining grids together in the Northeast Asia is possible, then there is a possibility of joining grids together worldwide to solve the global energy issues.

“Now I am starting to see the bright future,” said Son.

Taking Advantage of Diversity in Loads and Resources

Mika Ohbauashi, director of REI, stated that this inter-regional grid integration can support maximization of usage of renewable energy, which is dispersed geographically. Some of the benefits of joining grid systems together are to reduce or replace peaking power plants, such as fossil-fueled generation, and to send surplus renewable energy from one country to neighboring countries, allowing the producing country to avoid curtailing renewable power production. These benefits are possible because different regions not only have different renewable resource profiles, but also different load patterns, including peaking periods. By taking advantage of the diversity in loads and resources, the ASG can increase the flexibility of the grid systems in each nation.

Power generation is secured. Cooperation for grid integration is formed. But does this project make sense financially? Son revealed some preliminary numbers from the ongoing feasibility studies.

“Renewable is clean and safe, but used to be very expensive,” Son said. “By sharing renewable energy with each other, renewable is now clean, safe, and stable and low-cost.”

Things are moving in the right direction, but Ryuichi Yokoyama, a professor Emeritus at Waseda University in Japan, said that certain conditions are required for the ASG project to be successful: Renewable energy distributed among the participating countries must be generated from different sources to be advantageous to all to cooperate and thus, ensure stable energy supply for all; participating countries must be politically, economically, and socially stable; and they must have cordial relationships with each other.