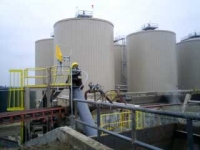 The whole idea stinks. But generating heat and power from livestock manure is appealing. The compost is placed into an oxygen-free machine that separates the methane gas and then uses it to create electricity to power farms or transport over the grid.

The technology is an important component in the fight against climate change. Normally, farms store the waste in a lagoon and then later use it as a fertilizer. But, that natural decomposition creates methane, which is actually 21 times more potent than carbon dioxide when it comes to affecting the Earth’s temperature.

The ability to capture that gas and then reuse it in an environmentally friendly manner not only lessens greenhouse gas output; it also reduces the need for other types of fuel sources.

Experts also say that the process by which the methane is extracted through an “anaerobic digester”—an oxygen free machine—cuts both odors as well as the volume of solid manure by 90 percent. It thereby minimizes surface and groundwater contamination. The remaining waste makes for better quality fertilizer. About 135 electricity-producing manure digesters now exist on U.S. farms, says the U.S. Environmental Protection Agency. Those systems produce 248 million kilowatt-hours of electricity annually.

According to the Wisconsin Public Service Corp., the cost of a digester depends on specific farm conditions and the return on investment can range from a few years to more than 10 years. Systems typically use about 30 percent of the biogas to heat the digesters with the balance being used to supply a farm’s electricity or heating needs. Typically, a minimum herd of 300 dairy cows or 2,000 swine is needed to make such a system feasible. The cycle time to turn the manure into heat and power is 20-30 days.

Illinois-based Ameren is now trying to determine the feasibility of using methane gas from hog manure. It is hopeful that it will be able to install an anaerobic digester and generator by year-end. The central idea is that a waste byproduct—manure—can be processed and converted to electricity.

Manure collected from a farm in Carlyle, Illinois would be stored in the digester. Methane gas would then be siphoned off and used to power the generator, which could produce between 200-400 kilowatts of electricity. The electricity would be used by the farm, which has a peak electric demand of over 700 kilowatts. The heat created by the generator would be used to heat the digester.

“The primary benefit would be renewable energy credits, or carbon dioxide (CO2) offset credits, that Ameren could obtain to use in responding to various future government initiatives,” says Ameren Strategic Analyst Paul Pike. Pike notes for each one-ton emission of methane gas captured and converted to energy equals 21 tons of CO2 not released into the environment. Ameren is working with the Illinois EPA and the University of Chicago on the project.

The Upside
Pacific Gas and Electric is teaming with dairy farms throughout California to use their animal waste to create electricity. The San Francisco-based utility has already demonstrated a 60-kilowatt generator that uses cow manure as a fuel source. At least a couple dozen dairies in the state have received $6 million in federal and state grants to go forth with these kinds of projects. Similarly, Portland General Electric is partnering with dairy farms in Oregon to do the same.

In the meantime, the U.S. Department of Agriculture and the Ohio Department of Development are spearheading the development of digesters in Ohio. The former will pay about $500,000 towards the cost of two separate contraptions, each of which will cost about $2 million. The state agency has set aside $1.5 million in 2008 and 2009 for a range of worthy projects. Most immediately, the Wenning Poultry and Bridgewater Dairy are working to capture methane from cow manure before it is converted to electricity. The separate projects could be operational by year-end.

And, New Hampshire-based Microgy Inc. is making electricity from cow waste in such places as California, Wisconsin and Texas. Huckabay Ridge in Texas, for example, will entail the construction of eight 916,000-gallon digesters, sufficient to process the manure from up to 10,000 cows. The company, which is considering a second plant in the state, says that all of the enterprises in which it is involved will be profitable as long as natural gas prices stay above $4 per million BTUs.

The Huckabay facility, which will end up costing $12 million to $18 million, is expected to produce an aggregate of one billion cubic feet of biogas per year with an energy content of 650,000 million BTUs. The gas will be treated and compressed before it is delivered via a natural gas pipeline to Austin. There, the Lower Colorado River Authority will use it as a power source.

“We’re absolutely the pioneers in this,” says Pat Chase, a Microgy regional manager based in Sulphur Springs, Texas, in the Waco Tribune-Herald. “The fact that we can take manure and other materials and digest them and make viable natural gas means the market is really unlimited. It’s only limited by how many cows and hogs you have in feedlots.”

Disposing of cow manure is literally a huge mess. And add to that the rising cost of energy and the ramifications of climate change. To help alleviate some of the problems, thousands of dairy and swine farms could play host to oxygen-free digesters. For now, the public sector is buying down some of the risks. If those first-of-their-kind projects perform, however, then the technologies and subsequent investments associated with extracting methane gas from animal waste would appear to hold lots of potential.