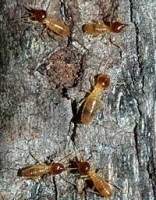 Walnut Creek, California [RenewableEnergyAccess.com] Termites, notorious for their voracious appetite for wood, rendering houses to dust and causing billions of dollars in damage per year, may provide the biochemical means to a greener biofuel future. The bellies of these tiny beasts actually harbor a gold mine of microbes that have now been tapped as a rich source of enzymes for improving the conversion of wood or waste biomass to valuable biofuels.

The genomic sequencing and analysis of the termite gut microbes is being done by the U.S. Department of Energy Joint Genome Institute (DOE JGI), the California Institute of Technology, Verenium Corporation (formerly Diversa), a biofuels company, INBio, the National Biodiversity Institute of Costa Rica, and the IBM Thomas J. Watson Research Center.

“The termite is a remarkable machine,” said Dr. Raymond L. Orbach, Under Secretary for Science, U.S. Department of Energy, whose program supports DOE JGI. “Termites can digest a frightening amount of wood in a very short time, as anyone who has had termites in their house is painfully aware. Instead of using harsh chemicals or excess heat to do so, termites employ an array of specialized microbes in their hindguts to break down the cell walls of plant material and catalyze the digestion process. Industrial-scale DNA sequencing by DOE JGI was key to identifying the genetic structures that comprise the tools that termites use. Our task now is to discover the metabolic pathways generated by these structures to figure out how nature digests plant materials. We can then synthesize the novel enzymes discovered through this project to accelerate the delivery of the next generation of cellulosic biofuels.”

While termites have been the subject of keen scientific study for more than a century, the precise identity and role of the microbes from their digestive tract remained a mystery. With this new work, the symbiotic orchestration of these compartmentalized, complex microbial communities required for wood digestion is now coming to light.

Like cows, termites have a series of stomachs, each harboring a distinct community of microbes under precisely defined conditions. These bugs within bugs are tasked with particular steps along the conversion pathway of woody polymers to sugars that can then be fermented into fuels such as ethanol. The mandibles of the insect chomp the wood into bits, but the real work is conducted in the dark recesses of the belly, where the enzymatic juices exuded by microbes attack and deconstruct the cellulose and hemicellulose, which, along with lignin, are the basic building blocks of wood.

The tiny insects that gave up their stomach contents to advance the frontiers of science were isolated on a safari into the rainforest of Costa Rica, the world’s geographic hotbed of biodiversity for termites, by co-author Jared Leadbetter of Cal Tech, first author Falk Warnecke of DOE JGI’s Microbial Ecology Program, and members of Verenium and INBio. Traipsing through the jungle, the team came upon a massive, tumor-like nest of termites clinging to an otherwise nondescript tree. With a flick of a machete, the contents of this dense network of tunnels forged from wood waste were revealed, along with a frenzy of higher termites from the genus Nasutitermes, which are only about the size of the date imprinted on a penny.

Foregoing the funnel-headed “soldiers,” the project focused on the larger “workers,” with bulbous heads and inflated bellies. In the laboratory of INBio, researchers armed with fine forceps and needles painstakingly extracted the contents of the workers’ third paunch or hindgut, referred to as P3, a distended kink in the convoluted plumbing system of the termite. Each sample was barely visible to the naked eye, and care was taken not to contaminate it with material from neighboring stomachs. Contents from 165 specimens were purified, yielding only a few valuable drops—a veritable microbial mosh pit—that was sent on ice to Verenium for DNA extraction and preparation, then on to DOE JGI’s Walnut Creek (CA) Production Genomics Facility for sequencing.

From the sample, about 71 million letters of fragmented genetic code were elaborated and computationally reassembled, like putting Humpty Dumpty back together again, to tease out the identities of the microbial players in the mixture and the metabolic profile of the enzymes that they produce. From this reconstructed liquid puzzle emerged the identities of a dozen different phyla—broad groupings of microbial life forms.

“Our analysis revealed that the hindgut is dominated by two major bacterial lineages, treponemes and fibrobacters,” said co-author Phil Hugenholtz, DOE JGI’s Microbial Ecology Program head. “Treponemes have long been recognized in the termite gut due to their distinctive cork-screw shape, but fibrobacters were an exciting new find, because they have relatives in the cow rumen known to degrade cellulose. We could directly link the termite fibrobacters and treponemes to enzymes capable of breaking down wood. However, fibrobacters are specialists in this regard and don’t appear to participate in sugar fermentation, leaving that to the treponemes. This project has really given me a new appreciation for the lowly termite, a mobile miniature bioreactor.”

In the termite P3 compartment alone, more than 500 genes related to the enzymatic deconstruction of cellulose and hemicellulose were identified by Hugenholtz and colleagues. The termite gut metagenome dataset will become publicly available in the next version of DOE JGI’s metagenome data management and analysis system, IMG/M, scheduled for release in January 2008.

“Adapting these findings for an industrial-scale system is far from easy,” said Eddy Rubin, JGI Director. “Termites can efficiently convert milligrams of lignocellulose into fermentable sugars in their tiny bioreactor hindguts. Scaling up this process so that biomass factories can produce biofuels more efficiently and economically is another story. To get there, we must define the set of genes with key functional attributes for the breakdown of cellulose, and this study represents an essential step along that path.”

These findings follow on the heels of the announcement by DOE Secretary Samuel Bodman in June that DOE will invest up to $375 million in three new Bioenergy Research Centers to accelerate basic research in the development of cellulosic ethanol and other biofuels.