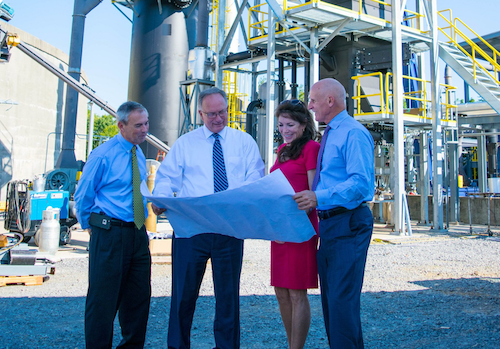 The world’s largest waste-to-energy downdraft gasification plant is being constructed in Tennessee — area mayors were invited to take a look at the facility in preparation for full startup early next month. PHG Energy of Nashville is providing design, installation and construction services to the city, deploying the company’s patented technology as the core of the system.

Mayor Philip Craighead hosted his legislative counterparts from nearby municipal and county governments recently for a preview tour of the site.

“This facility is going to be a model for public/private partnerships to cleanly dispose of waste and produce green energy,” Craighead told the group. “The next stage will be utilizing this technology to solve our ongoing municipal garbage situation, and give us all a much more sustainable and cleaner option than dumping waste into landfills.”

Touring the construction and getting a detailed briefing about the clean tech process were: Gallatin Mayor Paige Brown; Wilson County Mayor Ron Hutto; and Sumner County Executive Andy Holt. The City of Lebanon is hosting an official open house and site visits on Oct. 13 to mark the completion of the plant.

Mayor Craighead highlighted benefits of the new system as: