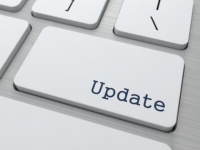 It’s been a busy summer for me and my Ten Clean Energy Stocks for 2013 model portfolio. While I delayed my monthly update, the companies in the model portfolio have been very busy reporting (and restating) earnings. Overall, the portfolio was flat for July and August, with 1.2 percent of dividends offsetting a 1.1 percent decline in stock prices. This put it further behind my benchmarks, the iShares Russell 2000 Index (IWM) for the broad market, and the Powershares Wilderhill Clean Energy Index (PBW) for clean energy stocks. These each notched up 2 percent over the last two months. For the year to August 30th, my model portfolio is up 10.6 percent, compared to 22.5 percent and 37.9 percent for IWM and PBW, respectively. 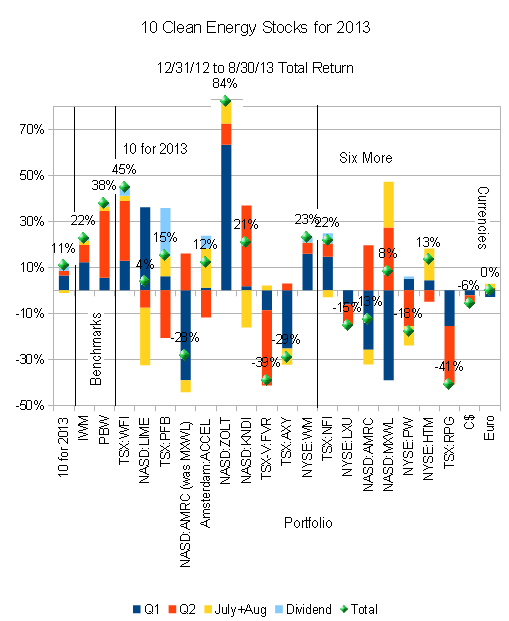 Below, I highlight significant events I feel affected performance of the stocks in these two lists.

After over a year, Lime Energy finally is current with its reporting requirements (details here).  The company is now leaner and more focused on its best business, running utility efficiency programs for small to medium sized utilities.  Unfortunately, capital is scarce and the company needs to bulk up in order to meet Nasdaq’s minimum shareholder equity requirements for continued listing.  I expect the company to try to attract a strategic investor in a secondary share offering, or potentially be bought out by a larger firm which offers services to the utility sector, such as EnerNOC (NASD:ENER).

Zoltek stock has risen all year on the possibility of a takeover or large cash infusion by a group of shareholders led by the Quinpario Group (more here). That possibility is looking even more likely now that Quinpario raised $172.5 million in the IPO of blank-check firm Quinpario Acquisition Corp. (NASD:QPACU).  Zoltek is not the only possible target acquisition target, but the additional cash and share currency will give its Chairman Jeffry Quinn more room to negotiate a mutually attractive offer with Zoltek’s board.

Investors, however, have been unimpressed.  Their disinterest arises mainly from a capital raise in late June which the company’s management had been saying it would not do just a couple weeks before.  Mr. Xiaoming Hu, Chairman and Chief Executive Officer of Kandi Technologies, said, “Given the challenging capital market environment, Kandi was proud to raise $26.4 million through a registered direct placement at the end of June. This will allow us to accelerate our market penetration in various EV projects and different regional markets.”

Investors seem to have paid more attention to a Seeking Alpha article by Richard Pearson How U.S. Investors Got Punk’d By Kandi and perhaps my own doubts about Kandi’s management’s dedication to shareholders, than to Mr. Hu.  The the stock fell 16 percent over the two months. despite the progress of the business.

Although I sold much of my holdings in June because of my unease with management, I bought some of them back in the recently now that the capital raise is out of the way. While I still don’t consider Kandi a long term hold, I think the good news should keep flowing for the rest of the year, and likely give me a profit on this recent trading position.

Power REIT has slowly slid over the last two months, although the news has been generally good.  Investors did not seem to like it’s recent solar deal, possibly because of the structure of the bridge loans used to fund it by the company’s CEO, David Lesser.  The interest rate on this loan has a step-up after six months, which investment managers I have spoken to generally feel is higher than an insider should be charging his own firm.

Lesser, in his defense, says that he has better uses for his money, and he would much rather be buying PW stock (which he has been doing on a daily basis in recent weeks), and so he needs compensation for tying his money up if the firm is unable to secure bank financing quickly.  Although Power REIT recently re-financed a similar bridge loan with bank debt, the process took six months.   I personally would like to see better bridge financing for such deals in the future. Lesser is talking with multiple asset managers who might be willing to provide bridge financing on more attractive terms, but the parties I’ve spoken to say the discussions are not yet very advanced.

Such concerns may not dominate investors’ minds for long, because on August 29th, the judge in the civil action granted Power REIT’s motion to supplement its counterclaims against Norfolk Southern (NYSE:NSC) and Wheeling & Lake Erie Railway (WLE).  These additional claims relate to 23,000 pages of documents belatedly provided to Power REIT by WLE, under the terms of the lease.  The inclusion of these claims increase the potential damages which Power REIT might be awarded to approximately $14 per PW share, not including any interest and penalties.  If even a low interest rate were applied to the amounts potentially owed to Power REIT, that $14 could easily double or quadruple given the long term nature of claims.

A copy of the decision is available here.

While the investments in solar farms are why I first became interested in Power REIT more than a year ago, such deals will not dominate returns for PW investors until the civil suit with NSC and WLE is resolved.  PW’s case seems strong to me, and even a loss could bring the company some benefits in terms of significant tax deductions.  With all parties now working on motions for summary judgement, I would expect a ruling in early 2014, if not sooner.

US Geothermal rose as investors realized that the company is now profitable.  In their second quarter earnings release, management gave guidance which leads me to believe earnings would be in the 1 to 2 cent range for 2013, and approximately 3 cents in 2014.  But more important than earnings is the free cash flow generated by HTM’s projects.  With income-oriented clean energy companies such as Brookfield Renewable Energy Partners (NYSE:BEP) currently trading below 6 percent yields, Aram Fuchs, general partner at hedge fund Fertilemind Capital tells me that he thinks US Geothermal’s stake in its Neal Hot Springs project alone is worth more than the company’s entire capitalization, if it were sold to such a player.

US Geothermal’s management has no plans to sell, however, and said as much in response to a question from Fuchs in their conference call.  With little potential for such instant gains, and more maintenance downtime than investors expected in the second quarter left HTM with only a 14 percent gain after the conference call.  It had previously been up as much as 72 percent.

With only four months left in they year, it looks like my portfolio will fail to beat its clean energy benchmark for the first year since I started publishing the list.  I still have high hopes for significant advances in Ameresco (NASD:AMRC), Alterra Power (TSX:AXY, OTC:MGMXF), and Finavera (TSXV:FVR, OTC:FNVRF), but some of those gains may be delayed until 2014, and these three would have double on average over the next four months to close the wide gap that has opened between my ten picks and PBW.

It could happen, but I’m not holding my breath.  In any case, I’ll find it easy to console myself now that I see clean energy stocks finally getting the kind of attention from investors that they deserve.