January has been a great month for clean energy stocks, and the stock market as a whole. My clean energy benchmark, the Powershares Wilderhill Clean Energy Index (PBW), returned 10.9%, while the broad universe of small cap stocks which I benchmark with the iShares Russell 2000 Index ETF (IWM) is up a lesser but still impressive 9.5%.

So far this year my picks are losing the relative performance game, but 2012 started in a similar fashion.  At the start of February, PBW was up 21% and my picks were up only 15%.  The year ended with PBW down 16.4%, and my picks up 7.4%.  I have much better hopes for this year,especially for clean energy as a whole.  There’s a meme that’s even finding it’s way into mainstream media and Wall Street research notes that 2013 could be an inflection point for clean energy.  The long decline has certainly produced a number of great values which few would expect to see in a sector most people would associate with growth stocks. 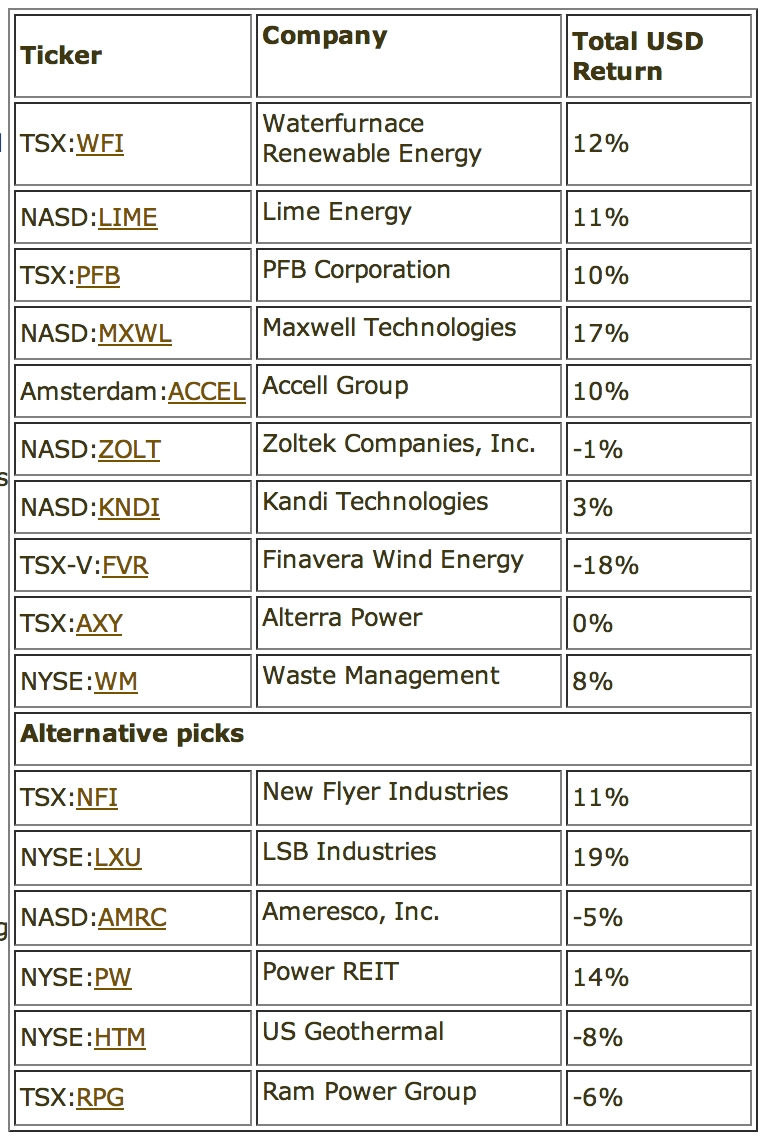 The table to the right shows individual stock performance through February first, for my ten picks plus the six alternative picks I presented in a second article.

Below, I highlight significant events I feel affected stock performance.

Lime Energy (NASD:LIME) started the month with a rapid rise of $0.81 only to fall to $0.53 as worries surfaced about a possible NASDAQ delisting.  It’s regained some lost ground over the last few days since Lime won a stay of delisting from NASDAQ.  While I can’t predict what NASDAQ will do, I think they should give Lime’s management the extra time they’re asking for to complete their internal audit and file their much delayed financial reports.  Lime seems to me to be complying with the spirit of the listing rules, in that they are attempting to provide accurate financial information, even if the ongoing internal review is taking much longer than anyone ever expected when Lime’s audit committed first discovered the misreported revenue.

Lime is the biggest gamble in the portfolio.  Right now, the market is discounting a large chance of a delisting and some very bad news from the internal audit.  Both fears are real, but I think the risks are not nearly as great as is reflected in the current stock price.  We should know the truth by the end of March.

Zoltek Companies (NASD:ZOLT) started the month with a big jump when the wind Production Tax Credit (PTC) was extended as part of the fiscal cliff package.  Then it gave back all its gains on February first when the company missed analyst’s earnings estimates for the fourth quarter for 2012.  I think the PTC extension is more significant than the weak fourth quarter performance, and used the sell-off to add to my position.

Kandi Technologies (NASD:KNDI) lagged for most of the month, only to surge on February 1st on the announcement that the company was setting up an electric vehicle joint venture with Geely Automotive Holdings Ltd (Hong Kong:0175).  Geely announcement (PDF).  Geely is a major Chinese automaker without a significant presence in EVs, but an extensive dealer network throughout China.  The partnership should allow Geely quick entry into the EV market, and provide strong manufacturing prowess and distribution muscles to Kandi.

Finavera Wind Energy (TSX-V:FVR, OTC:FNVRF) shocked me by finishing the month below its already depressed levels at the end of December.  However, the company’s fundamentals have not changed, and I used the recent lows to add to my position in Finavera as well.  I gave a more detailed analysis of the stock’s moves and an updated valuation of the company here.

Waste Management (NYSE:WM) rose sharply on rumors that it might convert into a REIT.  REIT or no, I like the dividend, and the continued expansion of their recycling business.  WM expanded its recycling footprint with the January 31st acquisition of Texas based Greenstar.

New Flyer Industries (TSX:NFI, OTC:NFYEF) got a big cash infusion by selling a 20% stake to Brazilian busmaker Marcopolo S.A at C$10.50 a share.  The companies will also explore opportunities to explore synergies in engineering, purchasing, technical, and operational matters.  That announcement, plus a growing backlog and several increases in analysts’ price targets all boosted the stock.

Power REIT (NYSE:PW) produced a $1M proof-of concept deal by investing in Solar Real Estate, showing that its plans to become a renewable energy REIT are more than just hot air. It also payed a $0.10 dividend, which had been delayed from the fourth quarter of 2012 for tax reasons.

The year is still young, but it’s off to a great start for clean energy.  My stock picks have been lagging a little, but at least in the case of Finavera and Zoltek, that should be looked on as a buying opportunity.