I missed my regular monthly update on my Ten Clean Energy Stocks for 2013 model portfolio last month, and a lot has happened to the individual companies since. Because of this, I will split this semiannual update in two parts. This part will look at the performance of the portfolio as a whole, and the reasons it’s lagging its benchmarks. The next part will look at the news driving the performance of specific stocks.

Since the last update on May 5th, my portfolio has advanced 3.0 percent for a 10.5 percent return for the first half.  However, the portfolio continues to lag both the broad market of small cap stocks as measured by my benchmark the iShares Russell 2000 Index (IWM), and the blistering performance of clean energy stocks, as measured by the leading clean energy ETF, the Powershares Wilderhill Clean Energy Index (PBW).

Leading clean energy stocks such as Tesla (NASD:TSLA), SolarCity (NASD:SCTY) and other solar stocks such as First Solar (FSLR) have been recently catching investors’ attention and producing stellar returns.

The former seem to be riding high because they have put the naysayers to shame by delivering better than expected growth.  Electric cars such as Tesla’s model S may not be great financial investments, but by all reports, they are great cars.  The skeptics might have done well to remember that the car buying decision is about a lot more than total cost of ownership (TCO).  If TCO were all car buyers ever considered, we’d all be driving small economy cars and the urban household with an SUV wouldn’t even exist.

The stronger solar stocks like First Solar’s gains have more to do with the extreme lows to which this sector had fallen over the last few years.  While overcapacity still looms, the industry has begun to consolidate, and module prices, if not increasing, have at least stopped plummeting.  Those companies which look likely to survive the shake-out are rebounding.

Both of these trends have led to a strong rally for clean energy stocks, the like of which we have not seen since before the financial crisis.

Along with my model portfolio, I also included a list of six alternative picks of clean energy companies I liked, but which I did not include in the main list because I felt they were not as well valued as the others. I intended that readers who were uncomfortable with any of my top ten picks to substitute from this alternative list, instead.  For instance, some of my picks are rather illiquid, and so larger investors would be unable to buy them without moving the share price too much. Similarly, readers who were not unwilling or unable to buy stocks which only trade internationally could put together a portfolio of nine U.S.-listed stocks. 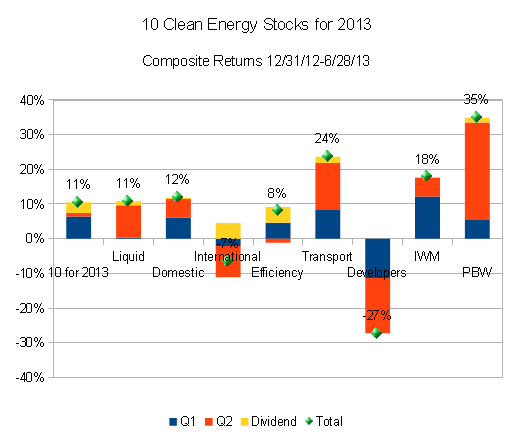 The chart above shows what the effects of such substitutions would have been, and also shows the performance of the clean energy subsectors (Efficiency, Efficient and Alternative Transportation, and Renewable Energy Developers) that account for at least four stocks among the sixteen.

As you can see, a focus on liquid stocks would have produced the same first half return as the model portfolio, and a purely domestic portfolio would have only performed slightly better.   However, as purely international portfolio would have done quite poorly, in part driven by the 5.6 percent decline of the Canadian dollar: Five of the six international stocks trade in Canada because Toronto Stock Exchange has a large fraction of the listed clean energy companies listed worldwide.

The core of the problem was the renewable energy developers: Finavera Wind Energy (TSX-V:FVR, OTC:FNVRF), Alterra Power (TSX:AXY, OTC:MGMXF), US Geothermal (NYSE:HTM, TSX:GTH), and Ram Power Group (TSX:RPG, OTC RAMPF).  This group declined an average of 23 percent for the year (including the effects of the declining Canadian dollar), despite a number of positive developments for the individual names.  All are trading a a significant discount to the value of their assets, with Alterra and Ram Power cash flow positive, and US Geothermal profitable on a GAAP basis.  Finavera, meanwhile, is in the possess of selling its assets and I expect it to have cash equal to more than twice its current share price by the end of next year.

A bright spot was the performance of my alternative transportation and clean transportation picks.  I think this is less due to a tail wind from Tesla than from individual factors at the particular companies; I’ll have details in the next part of this update.

I hope the current clean energy stock rally continues.  If it does, I’m sure it will leave my less flashy picks eating even more dust.  On the other hand, if the stock market’s excitement for renewable energy companies continues to spread, perhaps renewable energy developers will catch a little of the fairy dust.  I’d rather be flying and eating a little dust than drowning in the mud.

If the rally does falter, or even reverse, my picks should do relatively better, as they have in the last few years.  Let’s hope that does not happen: My last few years’ out performance has been small consolation for some rather dismal times in the clean energy sector.

Stay tuned for my summary of the last couple months of individual stock performance and company news.