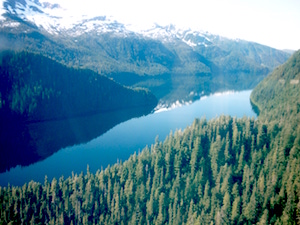 Abandoned on an iceberg and shoved off to sea, the Juneau Hydropower (JH) project at Sweetheart Lake was given a cold shoulder by the Regulatory Commission of Alaska (RCA) on Feb. 9. The shovel-ready 19.8-MW project made a written request for interconnection to the state-owned Snettisham transmission line in October 2016. Alaska regulations require economically regulated electric utilities to file an interconnection, integration, purchases, and sales tariff within 60 days of the date they receive a written interconnection request from a qualifying facility like Sweetheart Lake.

The management contract on the Snettisham line is held by Alaska Electric Light and Power (AEL&P), which is wholly owned by Avisa, an out-of-state corporation that is in negotiations to be purchased by Hydro One Limited. Hydro One is a foreign concern, whose primary and controlling shareholder is the Provincial Government of Ontario.

Raising eyebrows, AEL&P has the right to purchase the transmission line at the end of the State of Alaska bond term. Over 100 comments, including strong words from Alaska’s congressional delegation, have challenged if the proposed transfer is consistent with the public interest.

JH Managing Director Duff Mitchell says AEL&P was evasive, essentially denying access by forcing JH into a “really onerous” and “discriminatory” process created with no input or oversight by the RCA. “The interconnection process is apparently inconsistent with past interconnections to the Snettisham transmission line. Our small hydropower project is being mistreated as we were the size of Washington state nuclear power plant.”

In its Feb. 9 order, the RCA specifically set aside discussion of both interconnection and public interest from a conference it held Feb. 27 on the utility sale. RCA suggested that JH can initiate a proceeding by either filing a complaint or applying for assistance in resolving the interconnection dispute. The technical requirements of the remedy, however, cannot be satisfied, so JH is disqualified from putting its case forward through either forum.  The RCA must decide if Hydro One is fit, willing and able to operate AEL&P. Apparently AEL&P’s non-compliance with current State of Alaska regulations raises issues of whether they are willing to operate fairly.

The Sweetheart Lake Hydroelectric Facility would lower power costs for Kensington gold mine operations while increasing Juneau’s electrical generation by 25 percent. A related project would displace Juneau’s significant fossil fuel footprint by creating a district heating entity which would provide heat harvested from ocean waters to all the state-owned buildings in the capital city’s downtown core.

The JH private investment for construction of the Sweetheart Lake and its district heating entity seems like a job creator with Alaska’s historically high unemployment, but for a nondiscriminatory interconnection process and agreement.