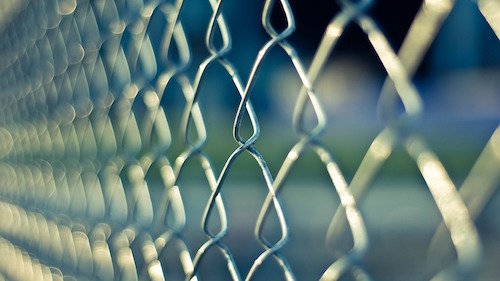 Inmates may be behind bars – but that doesn’t mean they can’t make a difference. Started informally in 2003, the Sustainability in Prisons Project (SPP) is on a mission to bring science and nature into prisons. By 2015, every prison in Washington State had implemented sustainable operations programs in waste sorting, composting, recycling, gardening, water and energy conservation, green purchasing, and more. Now, the Washington model is serving as an example for prisons throughout the US and around the world, as well as for residential institutions like military bases, assisted living centers, and summer camps. Between 2009 and 2014, the program has had a significant impact on the community wellbeing and carbon footprint of participating prisons. For example, an overall 42 percent and 35 percent reduction in carbon emissions and transportation fuel consumption, respectively. Learn more about the program’s impacts from the Program Coordinator Liliana Caughman.

Tell me about the Sustainability in Prisons Project.

On a mission to bring science and nature into prisons, the Sustainability in Prisons Project (SPP) has a number of different components that aim to inspire and inform sustainable practices in prisons. A partnership between the Evergreen State College and the Washington State Department of Corrections, one of the program’s goals is to reduce the environmental, economic, and human costs of prisons through sustainable operations (recycling, composting, energy retrofits, updating purchasing policies, and organic farming). 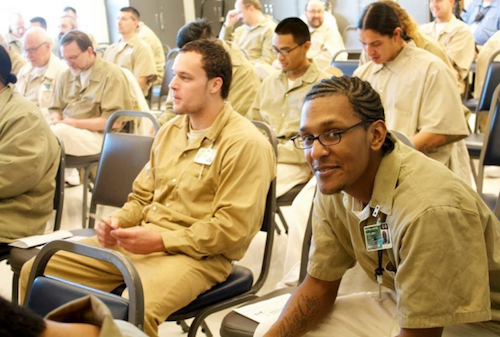 At SPP, we inspire and train inmates and correctional staff through programs designed to improve prison sustainability. We also offer educational programs like the Lecture Series where instructors range from business entrepreneurs and green energy experts to biologists and farmers. Additionally, SPP carries out ecological research and works to conserve biodiversity by forging collaborations with scientists, inmates, prison staff, students, and community partners. Finally, we focus on community contributions, partnering with nearby organizations to allow inmates to offer their services — like providing service dogs, restoring bicycles, weaving quilts, and bringing fresh vegetables to individuals on the outside.

What impact has the program had? How many inmates have participated in the programs?

Our programs are so expansive it’s hard to put numbers on how many people have been impacted, but here are some fun facts.

How large is the program?

All 12 Washington State prisons have multiple SPP programs. The Washington model is now serving as an example for prisons, residential buildings and recreation compounds around the world.

What are your plans for expansion? How will you continue to evolve/improve the program?

At SPP we are continuously working to improve both the breadth and depth of our programs. We hear and evaluate new program propositions all the time, which can originate from inmates, prison staff, external organizations and our own crew. One of the newest ventures we have been working on involves creating beekeeping programs that can certify inmates as Master Beekeepers. We are also working on ways to provide more support to our program participants after they are released from prison so that they can continue to be involved in the sustainability movement and find meaningful work to keep their lives on track. As far as ‘big picture’ improvements go, it is a goal for us to further integrate ideas and actions of environmental justice and ‘just’ sustainability into all of our operations. We want to continue to push the limits of what is considered possible in prison while providing services to a diverse set of participants and partners.

How did the Sustainability in Prisons Project start? 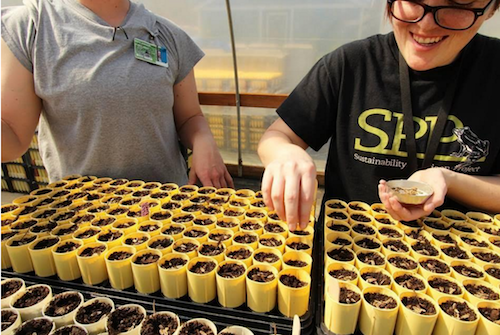 SPP started informally in 2003 when individuals from the Department of Corrections (DOC) and the Evergreen State College wanted to bring science, environmental education, and nature into prisons; their overlapping interests became SPP.

In 2008, the partnership between the two institutions became formalized and SPP has continued to grow and thrive ever since.

How did you get involved?

After earning my undergraduate degree in Physics from UC Berkeley, I began work as a Wind Energy engineer and analyst for a large multinational consulting firm. The job was not bad, but it lacked a certain dimensionality that I feel is vital to making the radical changes needed to combat global climate change and achieve true sustainability. So I took a risk, quit the job, and sought out a unique graduate program that could immerse me in the interdisciplinary and intersectional problems and solutions surrounding the environment.

I became involved in SPP when I was admitted into Evergreen for graduate school. At the orientation, some recent graduate students spoke about SPP and their immersion in the project. They mentioned there would be some positions opening and encouraged us to apply. I knew immediately that this was the type of significant work in which I believed, so I applied and got the job!

A priority with SPP is tracking and evaluating your work. Tell me about how you’re program is being received and the impacts you’ve noticed.

We document how our programs are received and the many outcomes: reductions in energy consumption, numbers of frogs raised and lectures offered, and pounds of produce donated. We also work with professional evaluators and students to assess the impacts of SPP on knowledge, behavior and attitudes of all participants.

Why is it important to have programs like the SPP in prisons?

Programs like SPP can help to evolve the prison industrial complex from a space that is purely punitive to one that actually facilitates rehabilitation. I have seen first hand how large of an impact SPP programs can have on individual participants. Some people speak about prison being the biggest wake up call of their lives and have been extremely thankful to have something like SPP be there to offer them a way to make a positive use of their time.

It seems to me that SPP offers hope to the inmates that even though they may have made poor decisions in the past, there are ways that they can contribute to making the world a better place, specifically by learning about the earth and working towards healing our environment. Some former participants have been released from prison and are now doing amazing things like going to college to earn Bachelors Degrees in Environmental Studies. 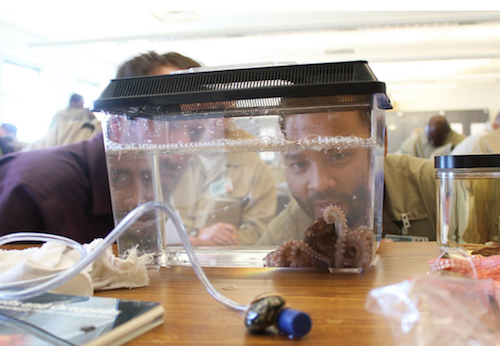 How has this made an impact outside of prisons when inmates are released?

Much of the work SPP programs focus on greatly contribute to the outside world. For example, rearing Taylor’s Checkerspot Butterflies or prairie plants that are engendered keystone species help restore vital ecosystems in the Pacific Northwest. Additionally, with sustainable operations prisons can reduce their ecological footprint and hopefully become more livable spaces.

Lastly, SPP does a great job of challenging public opinion on convicted felons. It shows people that just because someone has been incarcerated it does not mean that they are not smart or passionate about bettering themselves and contributing to the world. This can help reduce stigma towards the millions of Americans who are formerly incarcerated and need to find work to support themselves and their families.

What have been some of the challenging aspects of creating and coordinating this program?

Creating and implementing innovative programs that fit in to the prison environment can be challenging. We always have to consider safety and the rules and policies of each individual prison. In order for a program to happen, there needs to be good internal support from the prison administration and staff. Usually prison staff members are eager to help us get things going, but the prison environment is unpredictable and sometimes it can take a while to get a project off the ground.

As the Program Coordinator for the Sustainability in Prisons Project, what does your job entail?

At SPP, I’m a Program Coordinator and Graduate Student Researcher. Since SPP is housed at the Evergreen State College, researchers and coordinators must be enrolled in the Masters of Environmental Studies (MES) program at Evergreen. In this position I work on qualitative and quantitative research, program development and implementation, grant writing, and dissemination. I also coordinate the Lecture Series program and am heavily involved in many aspects of education and outreach for SPP.

The roles played by the Graduate Student Researchers, like myself, are a vital part to the success of SPP. Graduate students coordinate SPP programs that range from working with inmate technicians to rear endangered butterflies in prison, to planting and harvesting endangered prairie plants in conservations nurseries with crews of inmates, working with inmates to rehabilitates turtles and more. All education and outreach initiatives within and outside of prison are carried out by Graduate Student Researchers.

The SPP organization feels like a family. The core group consists of roughly 11 people and we all communicate and collaborate regularly. Most days at work consist of people bustling in and out of the office and to and from prison. It is a very collaborative space where everyone’s voice can be heard and where all people are appreciated.

The hardest part of this job is being faced with the reality of the prison industrial complex and realizing just how many people are incarcerated in this country. However, it is mitigated by the rewarding part where we feel like we are impacting lives and contributing to bettering the environment simultaneously.

How did you get interested in sustainability education? What sparks your passion?

I sort of fell into sustainability education on accident, but it definitely has become a passion. Coming from a “hard science” background I had always been interested in STEM (Science, Technology ,Engineering and Math) education and had previously worked for programs aimed at bringing STEM to underrepresented and diverse populations. As my academic interests shifted from pure science to environmental studies and interdisciplinary sustainability, I realized the importance of sustainability education. I want to help create a population in which everyone understands the scientific and social reasons that have contributed to climate change and where all people feel empowered to create a sustainable future. 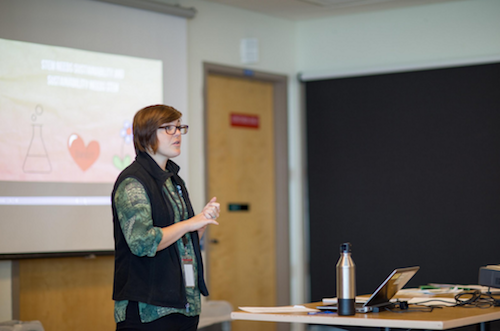 Do you have advice for women (especially younger women) trying to go into your line of work?

The best career and life advice I can give is to simply follow your instincts and stick to your morals, whatever they may be. For me, this meant leaving a job that others perceived as ideal, but did not make me feel alive. It meant furthering my education and pursuing a different direction than my undergraduate education. It means taking calculated risks, working hard, and hoping they pay off!

For those interested in working with underserved populations and engaging them in sustainability, the most important part is not making it about yourself. It is vital to listen to people, respect their stories and their culture, and meet them where they are. It can be easy to want to force people into thinking a certain way about the environment or take on certain sustainable practices, but if the people and communities you work with are not an integral and vested part of the process then the changes won’t stick and progress will not be made.

What’s next for you?

My current goals are finishing my Master’s thesis and graduating with my degree! I want to continue working in sustainability in such a way that I can work directly with people and communities. Currently I am also teaching Science, Sustainability, and Math at Northwest Indian College Nisqually campus and it is extremely rewarding. It would be great to continue on the path of teaching about these important topics. 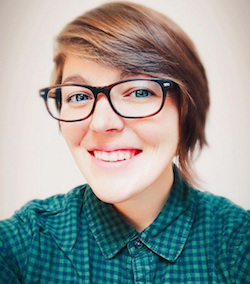 Liliana Caughman is completing a Master of Environmental Studies (MES) degree at The Evergreen State College with a focus on Sustainability Education. She works as a Graduate Student Researcher and Program Coordinator for the Sustainability in Prisons Project (SPP) and teaches math at Northwest Indian College (NWIC)’s Nisqually campus. Liliana graduated from from University of California, Berkeley with a Physics degree in 2014 and has worked as a professional wind energy engineer.