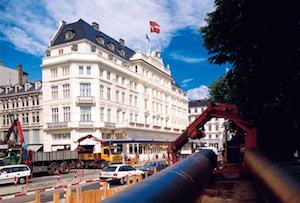 The company’s mission is to provide power that is “green, safe, and cheap,” says Nina Holmboe, one of the company’s environmental engineers. “Our vision is to create sustainable cities, so this is very important for HOFOR.”

Heat for the district heating system comes from combined heat-and-power (CHP) or from waste incineration plants. CHP, or cogeneration, is one of the most energy-efficient, climate-friendly ways of supplying energy.

According to HOFOR, cogeneration requires 30 percent less fuel than producing heat and power separately and has a commensurately smaller carbon footprint. District heating produces only half the CO2 emissions of individual gas boilers and 60 percent less than individual oil boilers. Moreover, it is also cost competitive with individual heating systems.

Currently, about 51 percent of the district heating system in the metropolitan area is supplied by renewable energy. Future systems will be able to accept heat from renewably powered technologies, such as wind-powered electric heat pumps or heaters, geothermal heat, and heat storage.

The city’s two major CHP plants each have a coal unit and a biomass power unit; however, by 2020, HOFOR will convert each coal unit into a highly efficient biomass plant. 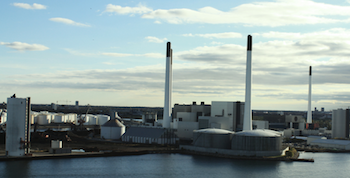 The Amagervaerket Power Station in Copenhagen, which utility company HOFOR plans to fully convert to sustainable biomass by 2020. Credit: HOFOR

One of the plants will run on wood pellets, whereas the other, a 500-MW unit, will burn 1­ to 1.5 million tons of wood chips annually. Both pellets and chips are considered renewable fuels because trees remove CO2 from the air while growing, and if replanted, they will eventually recapture CO2 from the air through photosynthesis.

This conversion will eliminate 80 percent of the city’s CO2. The last 20 percent reduction needed to get to zero net CO2 emissions is to come from waste incineration.

Biomass as a Transition Fuel

Copenhagen energy planners view their current dependency on biomass as transitional. By 2030, some of the biomass-based heat supply may be phased out as less carbon-intensive technologies are likely to be phased in. Right now, however, “biomass is the only technology that can deliver the baseload we need,” according to HOFOR Senior Vice President Morten Stobbe.

In addition to its coal-to-biomass conversion project, Copenhagen is testing heat pumps for district heating. “The heat source can be the ocean or . . . industrial surplus heat. It can be sewage, heat from sewage treatment. . . . We also have geothermal energy, so we have heat pumps combined with geothermal,” Stobbe explains.

HOFOR is pioneering a district cooling system using seawater from the city’s harbor to deliver cooling services from two cooling plants to businesses in central Copenhagen. 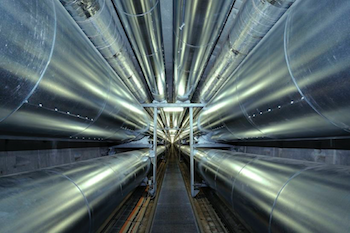 During the colder months, the plants deliver chilled water through large insulated underground pipes to customers who use basement heat exchangers to cool down the warmer air circulating in their buildings. Often the resulting chilled air is used to cool server rooms or rooms containing heat-generating equipment. Then the water is piped back to the cooling plant.

In the summer, the plants use electrical chillers to reduce the temperature of the seasonably warmer intake seawater. Customers then use the freshwater it chills to cool equipment rooms and offices. Meanwhile, inside the cooling plant, seawater is used to chill the plant’s compressors, saving the plant energy. 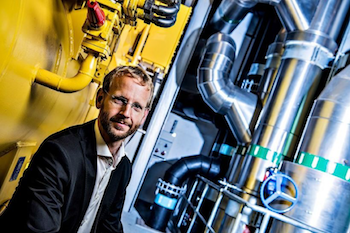 Compared to conventional air conditioners, the district heating system’s efficiency reduces CO2 emissions by 70 percent and lessens the urban heat island effect by eliminating the hot air exhausted by traditional cooling systems. According to Henrik L. Bogeskov, HOFOR’s head of district cooling, the system has the potential to save 150 MW of power over conventional cooling technologies.