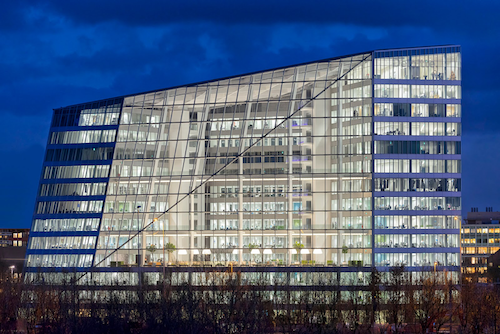 Convinced that a rapid transition away from fossil fuels would be a “win-win” for the city, Amsterdam officials are committed to reducing its greenhouse gas (GHG) emissions by 80–90 percent by 2050, largely eliminating reliance on fossil fuels.

Milestones include becoming a sustainable city by 2040 and slashing GHG emissions 75 percent by then relative to 1990.

City leaders recognize that achieving the 2050 goal will require broad cooperation as well as patience and perseverance. For almost a decade now, they have tried to reach out to the business sector, and civil society groups to build a broad social consensus in favor of the city’s energy and climate strategy.

Amsterdam’s sustainability vision is panoramic in scope, encompassing energy, water, raw material use and waste reuse as well as transportation and the deployment of public space. Green roofs and better storm water management are also on the agenda to help make the city more flood proof in anticipation of future heavier rains due to climate change.

As set forth in Amsterdam: A Different Energy: 2040 Energy Strategy (2010), the city’s vision integrates economic and social aims with environmental and climate goals in the service of achieving a clean renewable energy economy with a broad range of public co-benefits rather than unrequited costs.

Thus they expect that the plan will provide a bulwark against fossil fuel price volatility and an eventual era of fossil fuel scarcity while simultaneously making Amsterdam a more prosperous, cleaner, quieter, safer, more pleasant, and more affordable place to live.

As outlined in “Amsterdam’s Challenging Green Agenda,” the city is increasing its per capita renewable energy production, its use of electric vehicles, and the number of energy efficient homes connected to a district heating system powered with waste heat. Amsterdam also aims to double today’s recycling rate by separating 65 percent of its urban waste into resource flows of glass, paper, plastics, and textiles by 2020.

By reducing the need for fossil fuels, Amsterdammers expect that their investments in modern, efficient, clean energy systems will ultimately pay for themselves in energy cost savings. They see this as a “win-win” that will render the city more pleasant and healthier in the near-term while insuring that, long-term, future energy supplies stay affordable and predictable in price.

Their perspective on the economic and lifestyle benefits of a clean-energy transition is in sharp contrast to the view of some American politicians who juxtapose environmental protection against economic growth and attempt to link clean energy with higher energy prices, privation, and economic distress.