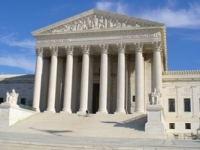 WASHINGTON, D.C. The United States Supreme Court has unanimously held that the flow of water from an improved portion of a navigable waterway into an unimproved portion of the same waterway does not qualify as the “discharge of a pollutant” under the Clean Water Act (CWA).

The Supreme Court’s ruling reverses a decision from the U.S. Court of Appeals for the Ninth Circuit, which said that pre-polluted water originating from a navigable river and passing through a “man-made construction” into the natural river downstream is a “discharge of a pollutant” as per the CWA.

The District Court granted a summary judgment to the District in part because the record did not show that the District’s storm water system was responsible for discharging the standard-exceeding pollutants, though that ruling was subsequently reversed by the Ninth Circuit.

The Ninth Circuit argued that the pollutants were detected at monitoring stations located in the District’s “man-made constructions”, thus making the District liable for their discharge from the MS4.

According to the Ninth Circuit, the CWA “does not distinguish between those who convey what is added by others”, meaning the act is “indifferent to the originator of water pollution”.

The Ninth Circuit’s ruling was overturned by the Supreme Court, however, which argued that South Florida Water Management District v. Miccosukee Tribe, 541 U.S. 95 (2004) had already established precedent for such disputes.

As in the Miccosukee case, the Supreme Court defined the “discharge of a pollutant” to mean the “addition” of a pollutant, meaning discharges occur under the CWA only if water is transferred between “meaningfully distinct water bodies.”

“If one takes a ladle of soup from a pot, lifts it above the pot, and pours it back into the pot, one has not ‘added’ soup or anything else to the pot,” said the Supreme Court in an opinion delivered by Justice Ruth Bader Ginsburg earlier this week.

The Supreme Court’s decision is important to the hydroelectric industry in that it preserves the long-standing precedent that hydropower dams are generally not subject to NPDES permitting, according to energy and environmental law firm Van Ness Feldman.

Van Ness Feldman, which authored an amicus brief for the hydroelectric industry urging the result reached by the Supreme Court, said an affirmation of the Ninth Circuit’s decision might have required dam operators to obtain NPDES permits for the water releases required for power generation or spillway flows.

Van Ness Feldman also noted that NPDES permits must be obtained every five years, which could interfere with Federal Energy Regulatory Commission (FERC) licenses that already include water quality conditions under CWA Section 401.