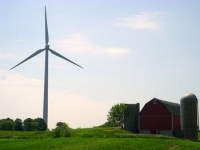 Washington, D.C., United States [RenewableEnergyWorld.com] The latest issue of the Monthly Energy Review by the U.S. Energy Information Administration reveals that production of renewable energy for the first third of 2009 (January 1 – April 30) was six percent higher compared to the same time period in 2008. In April 2009 alone, renewable energy sources accounted for 11.1 percent of domestic energy production and exceeded the amount contributed by nuclear power, according to analysis done by the Sun Day Campaign

Most of these sources grew compared to the first third of 2008 with wind expanding by 34.5%, biofuels by 14.1%, hydropower by 8.2%, and geothermal by 2.6%. The contribution from solar sources remained essentially unchanged while wood + wood waste declined by 4.9%.

Total U.S. energy consumption fell 5.7% during the first four months of 2009 compared to the same period in 2008 with fossil fuel use accounting for almost the entire decline.

“As Congress continues to debate energy and climate legislation, it would do well to take note of the clear trends in the nation’s energy mix,” said Ken Bossong, executive director of the Sun Day Campaign. “Fossil fuel use is dropping sharply and nuclear power is barely holding on to its market share while month-after-month the mix of renewable energy sources continues to set ever-higher records.”