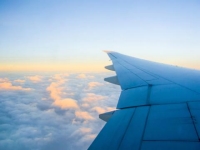 In France, Amyris and Total announced a successful demonstration flight at the Paris Air Show its renewable jet fuel made from Amyris Biofene and, ultimately, from plant sugars.

The Airbus A321 aircraft powered by two Snecma CFM56 jet engines flew from Toulouse to Paris with a blend of renewable jet fuel produced by Amyris and Total. This demonstration flight was in support of the French Initiative for Future Aviation Fuels, which seeks to produce and commercialize alternative, renewable and sustainable aviation fuels in France in the coming years.

Yep, You’re Flying on Sugar — by Way of Farnesene 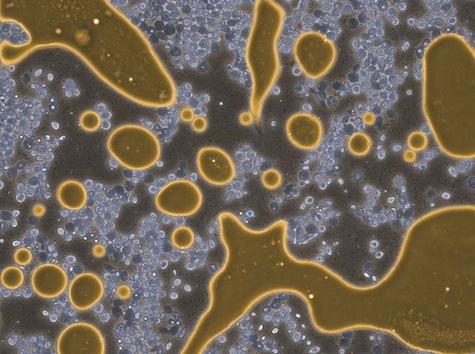 Farnese being formed from sugar via genetically-modified yeast

The first molecule that Amyris is focusing on is Biofene, Amyris-brand farnesene, a hydrocarbon building block that can replace petrochemicals in a wide variety of products in the cosmetics, flavors and fragrances, consumer product, polymers, lubricants and fuel markets.

Can Sugar Work as a Renewable Jet Fuel Stock – On the Economics?

Now that the technology is proven, and Amyris and Total are committed to a joint venture in renewable diesel and jet fuel that will include commercial-scale facilities, the remaining big question is the sourcing of sustainable, available, reliable, affordable tonnages of sugar.
Cellulosic sugars are on the way — but for now, Amyris is focused on cane sugar. There. there’s a decent body of evidence, over the past ten years, that the cost of oil-based jet fuel is rising faster than the cost of sugar.

Here’s the tale of the tape. 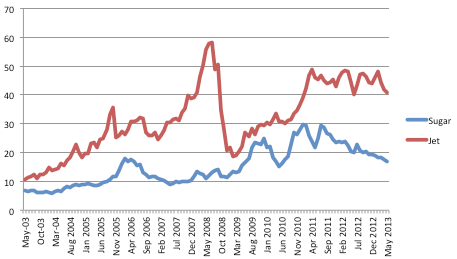 Ten years ago in spring 2003, jet fuel was selling at 10.60 cents per pound and sugar was selling at 7.01 cents per pound. Not much margin there for the large capex and opex associated with turning sugar into jet fuel. Just 3.59 cents per pound, or 24 cents per gallon in margin between the feedstock and the fuel. Even amortized over 15 years, the project would have been unlikely to cover the capital costs — much less the opex of running a large operation.

But look at today. Jet fuel is selling at 40.75 cents per pound, and sugar at 17.08 cents. The spread has grown more than six times, to 23.67 cents per pound, or $1.58 per gallon. Allowing for, say, a capital cost of $8-$10 per gallon of installed capacity, amortized over 15 years there is meaningful spread still left over to cover operating costs and margin.

But consider the trend — a spread that’s grown 6X over 10 years — and you might consider that sugar could well provide an excellent long-term hedge against rising oil-based jet fuel prices.

In December 2012, Amyris began commercial production of Biofene at its industrial-scale production facility in southeastern Brazil. Amyris and Total expect the fuel to be commercially available as early as 2014, following approval by the ASTM International, the world’s leading fuel standard setting body.

The story goes back to 2009, from the point of view of test flights, when Embraer and General Electric announced that they would conduct a test flight using renewable jet fuel produced from sugar cane by Amyris Biotechnologies. The ERJ-190/-195 test flight was operated by Azul Linhas Aereas, using sugarcane as a feedstock.

“That initiative has the enthusiastic support of Azul’s  founder and CEO David Neeleman and the Brazilian Government,” said Tom Casey of ACA Associates at the time, “especially as the demonstration involves an Embraer commercial airplane, flying with a Brazilian airline and using a Brazil-sourced bio jet fuel from sugarcane feedstock.”

Next Steps for Total and Amyris

As a result of the continued success of Amyris’s existing technology collaboration with Total, the two parties intend to form a joint venture company by mid-2013 to market renewable diesel, jet fuel, and other specialty products derived from Biofene, Amyris’s renewable brand of farnesene.

Last August, Total reaffirmed its commitment to Amyris’s technology and dedicated its $82 million funding budget over the next three years exclusively for the deployment of Biofene, Amyris’s renewable farnesene, for production of renewable diesel and jet fuel. Total’s commitment includes a $30 million payment to Amyris in 2012.

The Total Group holds a 66 percent stake in SunPower, a world leader in solar energy, and an 18.5 percent stake in Amyris, an integrated renewable products company. Additionally, Total is actively engaged in a number of renewable R&D projects, such as solar and biomass.

Reaction from the Partners

“This is a significant milestone in our strategic partnership with Total for biofuels. From developing the world’s leading synthetic biology platform to producing and distributing renewable products globally, the Amyris-Total collaboration demonstrates the power of partnerships to drive innovation and deliver sustainable products,” said John Melo, President & CEO of Amyris. “Today’s flight is another step closer in achieving ASTM certification, which paves the way for the commercialization of our renewable jet fuel,” Melo concluded.

“The air transport sector has an ambitious target: drastically reducing its greenhouse gas emissions by 2050 while commercial flights and demand for jet fuel will steadily grow. To that end, biofuels will play an important role along with improved aircraft energy efficiency. This demonstration flight illustrates the capacity of Amyris and Total to integrate, as of today, aeronautical biofuels in a concrete and reliable way,” said Philippe Boisseau, President, Marketing & Services and New Energies and a member of the Executive Committee of Total. “As one of the world’s biggest suppliers of aviation fuel, Total aims at widely offering this solution to airline customers. We are confident that we will be able to achieve this within the coming years.”