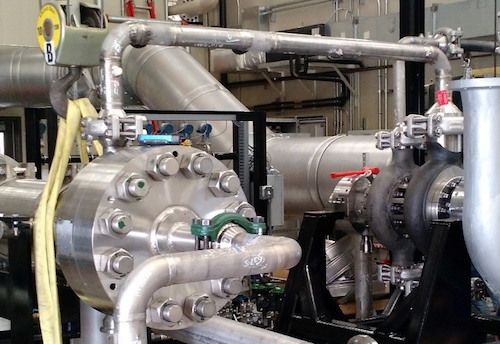 Editor’s Note: The U.S. Department of Energy’s (DOE) SunShot initiative is helping improve the future of concentrating solar power technology. The following is DOE’s commentary on that effort.

Using sCO2—carbon dioxide in a state that combines characteristics of both liquids and gases—as the working fluid in turbine power cycles helps to significantly improve CSP plant efficiency. Rather than using steam to power an electric generator, sCO2 is heated to temperatures greater than 700 degrees Celsius to drive a turbine and create electricity.

Using similar thermal energy inputs as a traditional CSP plant, a sCO2 power cycle generates more electricity for a given amount of heat, improving plant efficiency and lowering the cost of electricity. And because of the physical characteristics of sCO2, the turbines are much smaller than traditional steam-powered turbomachinery. This leads to less material utilization, lower upfront capital costs, and helps make the plant more cost-effective.

To accelerate the development of this research, SwRI and GE addressed critical gaps in making the technology more reliable. The duo developed a first-of-its-kind, critical component for the sCO2 Brayton cycle: a high-efficiency sCO2hot-gas turbo-expander. The team is testing the turbo-expander with the flow of sCO2 to mimic real-world, variable generation scenarios at the 1-MW scale and to ensure that it performs as expected under load conditions.

In conjunction with this work, SunShot awarded two additional projects to the GE and SwRI team to develop advanced components for sCO2 technology. In one, GE developed prediction models to validate the long-term reliability of the bearings and seals that are necessary to ensure the 30-year lifetime required for the turbomachinery.

In the second, the team is creating an optimal compression system to help a sCO2 power block consistently operate at a wide variety of temperatures and pressures. Because of the unique properties of the sCO2 fluid, the density and flow of the fluid can vary over a much larger range in a sCO2 power cycle, making compressor design integral to developing an efficient power cycle over a wide variety of operating conditions.

Due in large part to the team’s success at making CSP technology more efficient and reliable, the Energy Department selected GE, SwRI, and the Gas Technology Institute for an $80 million award to build a 10-MW pilot facility in San Antonio. Together, the team will design, build, and demonstrate the feasibility of this high-efficiency, low-cost power cycle. The new award will take the sCO2power cycle from the design and testing phase to demonstration at utility-scale, one of the last steps to commercialization.

Successfully demonstrating the viability of the technology goes beyond solar generation and can also be used for geothermal, nuclear, and fossil technologies. If successful, the facility has the potential to be significantly more efficient than current steam engine power plants, lowering costs and inching the solar industry closer to commercializing sCO2 technology.