A first-of-its-kind study of net evaporation at a hydroelectric facility reveals that the project has very little effect on the loss of water to the atmosphere as compared with pre-impoundment conditions.

Lakes, rivers, wetlands and forests are part of the Earth’s freshwater cycle. Water and energy are intricately linked and are two major necessities for modern civilizations. As population increases, the demand for water and energy is growing rapidly, creating challenging situations in a context where freshwater is a scarce resource in many regions. In the U.S., the energy sector is the largest user of water, accounting for about 50% of the total water withdrawals yearly.1

Over the past decade, environmental footprints increasingly have been used to indicate human impact on the environment,2 with the water footprint receiving much attention. There is an emerging debate about whether hydroelectric generation is a significant consumer of water through the evaporation process. Evaporation or evapotranspiration (transfer of moisture from the earth to the atmosphere by evaporation of water and transpiration from plants) varies regionally and is affected by several parameters – relative air humidity, air and water temperature, solar radiation, water surface area, wind velocity and vegetation type.

Most data available regarding the water footprint of hydropower complexes only accounts for gross evaporation estimated using traditional techniques.2,3 In many cases, gross evaporation from reservoirs is considered water consumption, and if associated with a water consumption tax, it would increase the hydropower operation cost. Therefore, an adequate method to evaluate net evaporation is necessary. Net evaporation is the evaporation associated with the reservoir minus the evaporation and evapotranspiration that occurred from the natural systems before flooding. For governments and the energy sector, the evaluation of net evaporation from hydroelectric reservoirs is becoming more and more relevant to ensure that methods of energy generation are compared adequately in terms of the water footprint.

This article presents the net water evaporation of a reservoir (Eastmain-1) based on comprehensive field data. This is a world-first research project and revealed that the Eastmain-1 reservoir net evaporation is close to zero.

The Eastmain-1 Reservoir is in the boreal ecoregion of Quebec, Canada, about 800 km north of Montreal. The Eastmain River watershed is dominated by coniferous forest and shallow podzolic and peat soils developed over igneous bedrock and quaternary sediments. Aquatic systems are described as oligotrophic – characterized by a low water nutrient concentration, supporting a sparse growth of algae and other organisms, and having a high oxygen content, with overall low production of algae and fish.

The hydrology of the Eastmain-1 Reservoir watershed (25,857 km2) reflects the regional climate; runoff is strongly seasonal, with high flows in the spring (peaking in May or June) and low flows in late winter. The reservoir is covered with ice about 180 days per year. The water discharged from Eastmain-1 will flow into the Opinaca Reservoir to be used at the new 138-MW Sarcelle powerhouse and again at the 5,616-MW Robert-Bourassa and 1,436-MW La Grande-1 generating stations. To reduce the impact of the project on the Rupert and Lemare rivers, mitigation measures were put in place. Eight weirs were built on the Rupert River to maintain the water level for different uses of the river (such as navigation and fish spawning areas), and an ecological instream flow that reproduces the mean annual natural hydrological cycle on both rivers is maintained.

In an Eastmain-1 Reservoir net greenhouse gas emissions project (www.eastmain1.org) that was carried out4,5 over seven years, many parameters were measured, including energy fluxes. Eddy covariance systems were used to measure evaporation from the reservoir and evapotranspiration from forests and wetlands. The exchange of water vapor measured does not discriminate between evaporation or transpiration. For simplicity, the measured water exchange is called evapotranspiration, with the understanding that such exchange from a purely aquatic system is evaporation. Details on the eddy covariance technique, equations and calculations are available.6 We used the standard procedures employed by the flux community in applying the eddy covariance technique.7

The natural aquatic ecosystem is divided into three categories: rivers, lakes and streams. The Eastmain River represents the dominant component in the region, with 82 km2 (55%) of the total aquatic surface area. Up to 827 lakes were contained within the flooded lands, with areas of 100 m2 to 10 km2, accounting for 45% of the total aquatic surface. More than 827 streams of various widths and lengths, from only 10 m up to 5.5 km and totaling 1.3 km2, represent the smallest component (less than 1%) of the natural aquatic system.4

Evapotranspiration was measured over forest, peatland and the Eastmain-1 Reservoir using three eddy covariance towers and meteorological stations. Measurements were carried out from June 2006 to October 2012 at the forest and reservoir sites. The eddy covariance tower on the peatland site was operated from June 2007 to October 2012. In this study, we used data from January 2008 to December 2012 as they represent the most complete continuous data set.

In certain periods of the year (see Table 1), daily evaporation or evapotranspiration data were unavailable; mean values of the others years’ data were used to complete certain years. All towers were removed in October 2012, consequently monthly values for October, November and December 2012, and mean values of 2008 to 2011 period data were used to complete the 2012 dataset. Similar calculations were done for January, February, March, April, May and December 2008 for the peatland site (see Table 1). 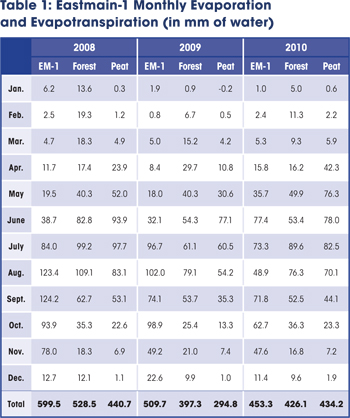 Our results are based on more than 25,000 measurements taken over five years. The annual evapotranspiration varied from 397 to 528 mm/year for forest, 295 to 468 mm/year for peatland, and 453 to 599 mm/year for the Eastmain-1 Reservoir (see Figure 1 on page 56). Evapotranspiration rates were higher during the growing season or warmer months (May to September) than during fall-winter time (October to April). 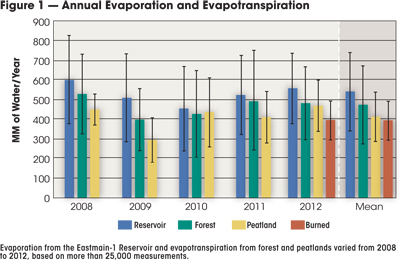 Similar forest evapotranspiration rates were observed,9 with 1.5 to 2.0 mm of water per day during the growing season in a central Canadian forest, as well as with 399 mm of water from May to October in a coniferous forest.10 Summer evapotranspiration rates for peatlands are also similar to those reported.11 The Eastmain-1 Reservoir evaporation compares well with the evaporation rates reported for South Sweden (500 to 650 mm/year)12 and Finland (500 to 700 mm/year)13.

According to the Hydro-Québec hydrology database and data from Environment Canada, there is typically 850 to 950 mm of precipitation annually in the Eastmain-1 region. Evaporation varies between 350 and 400 mm of water per year, which represents 30% to 40% of annual precipitation.

There are very few studies that have used the eddy covariance method on an open-water body. Eddy covariance requires turbulent atmospheric conditions for optimal performance, and data are therefore often biased toward daytime conditions when winds are more prevalent. For terrestrial ecosystems, missing data goes through rigorous and proven gap-filling routines, so bias is minimal. For the aquatic system, no such gap filling is readily available and therefore the daily evapotranspiration data values are likely overestimated by 20% to 30%.

We used a fixed surface area corresponding to the reservoir’s maximum surface area of 603 km2. However, this area varies throughout the year and is reduced as water is used to generate electricity, leading to an overestimation of reservoir evaporation on an area basis. This is particularly true for the summer months when the highest evaporation rates are combined with the smallest reservoir surface area. The annual water level fluctuation for this reservoir is 6 to 9 meters. At the minimum water level (9 meters drawdown), the reservoir surface would represent about 55 % (330 km2) of the Eastmain-1 Reservoir maximum surface area. Due to erosion by waves and ice, the drawdown area usually contains little vegetation biomass and therefore any additional source of evapotranspiration should be minimal.

The IPCC Special Report on Renewable Energy14 was an important document in assessing the potential for renewable energy sources to replace fossil-based fuels and included the volume of water needed to generate energy. That review identified only four publications on the comparison of energy sources and their water consumption in 2011. A few have been published since 2011, and a review of these3 indicated that hydropower water consumption rates varied from 0.04 m3 MWh-1 to 6,250 m3 MWh-1. However, most of the studies use gross evaporation rather than net evaporation.

Equation 1
Gross Evaporation = Reservoir Evaporation / Annual Power Generation
Gross evaporation for Eastmain-1 would be about 49 m3 MWh-1. Based on the measured Eastmain-1 Reservoir evaporation rates, we calculated the gross evaporation from the Robert-Bourassa Reservoir as 32 m3 MWh-1 using the installed capacity and a utilization factor of 65%. These numbers are similar to those presented for Canadian, Austrian and Norwegian reservoirs (14-33 m3 MWh-1)3 and for American reservoirs (34 m3 MWh-1)15. A mean gross evaporation of about 68 m3 MWh-1 has been calculated for U.S. hydropower.16 These are much lower than mean values for reservoirs in temperate, tropical and warm-dry regions, which are at 152 m3 MWh-1, 498 m3 MWh-1 and 1,658 m3 MWh-1, respectively.3

However, reporting gross evaporation does not take into consideration the evaporation losses from natural ecosystems that would have occurred prior to the construction of the power plant and associated reservoir. This is best represented as the net evaporation. 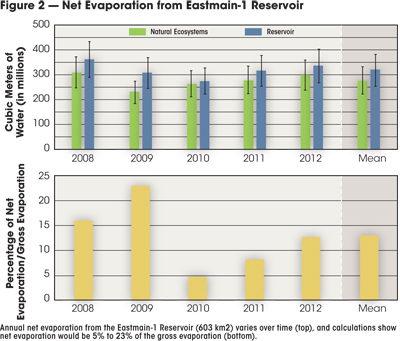 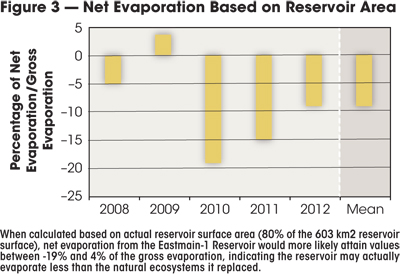 It is expected that reservoir evaporation, as well as the evapotranspiration of the luxuriant vegetation associated with warm regions (such as Panama or Brazil), would be much higher than boreal or temperate regions, but net evaporation should be lower than gross evaporation and would be close to zero in many cases. The exception would be reservoirs in arid regions, such as the Aswan Dam in Egypt or the Hoover and Glen Canyon dams in the U.S., where net and gross evaporation would be almost similar. This is related to the low vegetation biomass and small river surface area that existed before reservoir flooding, which translate as a very small amount of evaporation in comparison to the reservoir evaporation (<4%).16

Considering water on a global scale, evaporation from reservoirs is not lost and will not cause an imbalance to the global hydrological cycle. According to the definition of water consumption, it must be accompanied by a local or regional impact on the availability of water resources.3,14 Because the Eastmain-1 net evaporation is close to zero, the Eastmain-1 evaporation would have a minimal impact on the local or regional water resources.

Natural ecosystems, prior to reservoir creation, clearly emit significant amounts of water through evapotranspiration, which results in the net evapotranspiration for the Eastmain-1 Reservoir being close to zero. Overall, the Eastmain-1 Reservoir has a low net loss of water to the atmosphere and low net greenhouse gas emissions.4,5 Moreover, the mitigation measures put in place – including the eight weirs built on the Rupert River and an ecological instream flow reproducing the natural hydrological cycles of both rivers affected by the Eastmain-1-A/Sarcelle/Rupert project – are a good example of how a project can have very limited impact on water resources.