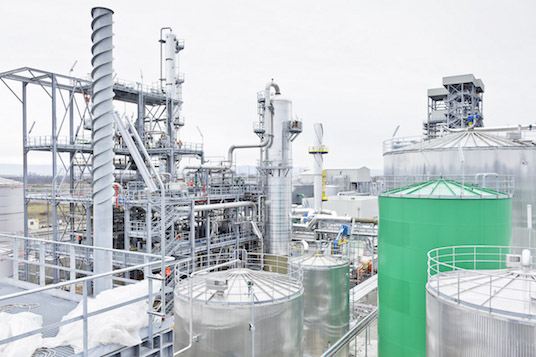 The next generation of biofuels that don’t use food crops as a raw material are starting to take hold, with a big expansion of the industry coming after 2020, one of the industry’s key suppliers said.

Novozymes A/S CEO Peder Holk Nielsen said the industry is shifting slowly toward using more cellulosic material – the woody bits of plants – instead of food crops, such as corn and sugar beets. Novozymes is the biggest maker of enzymes used in the chemical process to make biofuels.

“There are seven demonstration plants in the world that are producing at a commercial scale” for next-generation biofuels, Holk Nielsen said in an interview in London. “We are expecting a larger second wave of projects after 2020.”

For now, ethanol brewed mainly from food crops remains the dominant biofuel, with advanced formulas accounting for less than 2 percent of the industry. Novozymes and the companies it supports are anxious to bolster the cellulosic fuels as an alternative that won’t hamper the food supply.

The industry still faces challenges, such as the need for new technologies for harvesting the plants and finding better ways to break down tough fibers in plants so that the fuel conversion process works more easily, he said. The executive added that the oil price slump may benefit biofuel makers, since cheaper energy will lower the cost of processing.

Ethanol is cleaner than conventional fuels, emitting 50 percent to 72 percent less carbon dioxide, according to a presentation by Novozymes, which is based in Bagsvaerd, Denmark.

Inedible biofuels, also known as second generation, are less controversial than their edible counterparts because there is public opposition to growing food crops to burn rather than eat. However, they are more difficult to refine as they generally have tougher cellulose than softer food plants.

“The cellulosic biofuel industry is certainly reaching a commercial level, but most plants are not producing at anywhere near their full capacity and are also struggling to sell the fuel for the premiums they require to make the plants profitable,” Claire Curry, an analyst at Bloomberg New Energy Finance, said. “So we are still a way off from it being a viable industry.”

Novozymes is urging governments to set a mandate for biofuels, forcing oil companies to offer them to consumers. It sees such rules as a necessary step for the products to gain a market foothold.

Brazil will provide some of the strongest growth for the industry, since it has a strong domestic market and cheap sources of raw materials. Other key markets are China and the European Union. The U.S. is likely to remain focused on corn-based ethanol and will not be a significant producer of second-generation biofuels, Holk Nielsen said.

Enzymes made by Novozymes also are used in detergents, food, beverages and animal feed. They are used in the refining process for second-generation biofuels.