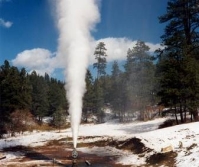 The new process for nominating land for geothermal leasing was passed in 2005 and the BLM has since processed nearly all the outstanding applications that it had received under the old law. The BLM is now focused completely on implementing the new process in order to receive nominations for competitive lease sales.

The BLM geothermal lease sales held last year in Idaho, Utah, Nevada, and California were largely sales of parcels that were held over from planned competitive sales under the old law.

In the past, the BLM has been criticized for taking too long to respond to applications. In his 1999 book, Internal Combustion: How Corporations and Governments Addicted the World to Oil and Derailed the Alternatives, Edwin Black excoriated the agency for its long backlog of applications to develop geothermal sites. Some applications had been waiting response for over 30 years, he said.

“It is remarkable to see BLM pushing through the old backlog and introducing a new image,” said Karl Gawell, Executive Director of the Geothermal Energy Association (GEA).

According to Kermit Witherbee, the National Geothermal Program Manager at BLM, there has been overwhelming support for the new program. Some states have already received several nominations from production companies, particularly Nevada and Oregon, with 73 and 50 nominations, respectively. It is interesting see the response for nominations in Oregon, which is thought to have significant resource potential but has no geothermal production online. Utah has received some nominations, and Montana and California have had some interest as well.

Land nominations are submitted on the state level using Department of the Interior BLM Form 3203-1. A nominal fee of US $100, plus US $0.10 per acre, must be included with each nomination.

The new process for nominations and leasing for power generation is similar to how oil and gas leasing works, Witherbee said. It allows the nomination of lands on the basis of company interest and makes them available for competitive bidding. If lands that are offered receive no competitive bids, they become available on a noncompetitive basis.

However, while there has been progress on leasing for power purposes, there has not been any participation on the direct use side of the nominations process.

The new law allows for applications for leases on land to be used strictly for direct use under a somewhat different process. Direct use applications require a 90-day post in order to allow for competitive interest to be expressed, after which a company can then go through the lease process outside of the competitive bidding/sale process.

Mining claims are also processed separately from electricity production and direct use leases. According to Witherbee, Nevada has had one request for a mining claim to be processed under the new law.

Tribes and local government have a different process that allows them to obtain leases for their use, which comes with almost no payments required, and so far the Postal Service has expressed interest in this opportunity, according to Witherbee.

Oregon and Washington will be holding a competitive geothermal lease sale, tentatively scheduled for June 12.

California and Nevada are currently planning a sale for July 15.

“The new lease sales will be important in many areas of the West for geothermal energy to have the chance to develop,” GEA’s Karl Gawell said.

In conjunction with the California/Nevada sale, the BLM will hold a workshop on leases and how to convert to royalties so that they are revenue neutral.

Leslie Blodgett is the Director of Outreach and Senior Editor at the Geothermal Energy Association.