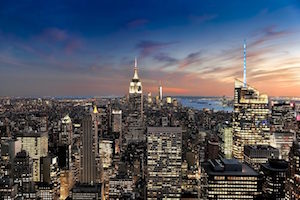 “What happened to oil in the late 1970s?” was a question assigned to me in elementary school to discuss with family over the Christmas holiday break. At the time, this question seemed innocent enough, and I didn’t know how my family would react about what I soon learned to be two oil embargos. Turns out when I brought it up one night, extended family members held a broad spectrum of views on the issue, and the question led to one of the most heated dinner arguments I can recall — until this year, at least. This holiday, family discussions focused on the presidential election. Fierce conversation ensued on standout topics. But, to my dismay, energy and the environment were just an afterthought.

While it is clear that these topics did not play a decisive role in the election, 2017 will nevertheless bring a new set of challenges for energy and environmental policy and elevate the conversation to a higher level. Progress we’ve made in the past few years, including environmental protections and the continuity of agencies that support them, are at risk of being undercut by the new administration, and policies that will protect future generations are at peril. At the federal level, the fight to stop climate change looks bleak.

As Environmental Defense Fund recently noted in California, Illinois, Maryland, and Ohio, clear and deliberate leadership at the state and local levels will become even more important to advance clean energy goals. Fortunately, New York’s history of advancing favorable environmental policies have resulted in valuable lessons that can be adapted and implemented in other states to increase economic development, create jobs, decrease pollution, and improve the quality of life of people throughout the country.

In the last three years, New York State has made efforts to advance a wide array of policies to improve the environment under the banner of Reforming the Energy Vision (REV), an initiative to change how electric utilities and consumers interact to accelerate the adoption of clean energy technologies and services in the state. As a result, environmental outcomes are now a key consideration when utilities make investments; private companies will have access to information needed to develop innovative products and services; and customers will have new tools to better manage their energy, lower their bills, and have a positive impact on the environment.

New York City’s determination to achieve a clean energy future continues unabated: Through a series of local laws, the use of No. 6 heating oil — a major pollutant — has been completely phased out, and by 2030, No. 4 oil — a slightly cleaner alternative — will face a similar fate. Mayor Bill de Blasio’s One NYC plan outlines a path for reducing carbon emissions, eliminating waste sent to landfills, and a variety of other efforts. The New York City Council recently passed three new laws expanding energy efficiency in buildings, adding to its stellar standing as one of the nation’s most sustainable cities. And much more is anticipated in 2017, as the City increasingly draws power from renewable sources.

Maintaining New York’s and other regional efforts will be essential to address the effects of climate change in years to come. Should we backslide on our commitments, our children will look back on this time in horror and astonishment at how the U.S. squandered an opportunity to address the clear dangers posed to their generation. Only through decisive action can we secure a healthy environment for generations to come, and that time is now.

Nationally, forward-thinking clean energy policies may be on the verge of stalling, but states will continue to fight for a clean energy future. In this, New York is not alone. California passed a series of bills imposing caps on greenhouse gas emissions to reduce pollution, and Illinois passed the Future Energy Jobs Bill that will add well-paying local jobs, while expanding the state’s already successful energy efficiency programs. Ohio vetoed a freeze on clean energy standards because it would hurt the local economy, and Maryland is exploring clean energy options. These states have drawn a line in the sand reaffirming their commitments to an economy and environment that benefit from clean energy, and more states throughout the country need to follow this trend.

It is encouraging to live in a state — Trump’s very own backyard — where the environmental threats we all face are recognized. EDF will work even harder to continue advocating for policies and concrete actions that will benefit our environment and country’s well-being.